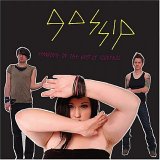 Standing in the Way of Control

Wow. Is it really July already? If so, then how did it come to pass that I haven't talked about a record that came out in February? The internet is a notoriously ephemeral entity, after all, and lapsing a few weeks on reviewing a record is worse than slacking off; it's dereliction of duty. Four months is simply unconscionable. It may as well have been released four years ago, or never at all.

Passing on a record usually implies distaste, but I liked The Gossip's new record well enough in February. I wish I had more of a reason for sleeping on it, but now that it is July I find it fitting that I waited. Standing in the Way of Control is sweaty, sexy, and extroverted – in other words, a summer album. Especially in the environs of the Pacific Northwest, where both the band and I call home, February is in the middle of the nine month long winter, where perpetual mist is interrupted by the occasional downpour. Hardly the ideal setting to enjoy what is perhaps the country's sexiest band. But during the summer, you can't beat the place with a stick: lakes sparkle, foliage is in full force, the sky is marble blue, everything pulses. If that doesn't make you want to dance, then nothing will, and you can replace that equation with this album.

Past Gossip records have been showcases for Beth Ditto's unparalleled vocal talent. Grainy and bluesy, one reaches past contemporary influences and comes up with Ruth Brown or Etta James. The band was a bit more ramshackle, but had a salacious swagger that matched Ditto's voice ("I'll give you something that you'll never forget / we're gonna do it 'til we're both out of breath"). This time around, that swing gives way to a tight and muscular disco-punk, doubtless thanks to new drummer Hannah Billie. While not altering the band's sound, they now play with a heads-down resolve that is thrilling: the title song explodes from the gate before settling into a two-handed drum groove. "Jealousy" is that song's inverse, a great drum pattern giving way to a galloping chorus. Billie's smooth playing also brings out the best in Brace Paine, from the loping "Your Mangled Heart" to the Sonic Youth-meets T-Rex primordial stomp of "Eyes Open." (Guy Picciotto's crisp production probably has something to do with it, as well.)

Ditto is right there with them throughout (peep the wails she lets out during "Your Mangled Heart," as if they were nothing), but occasionally the words that she is singing seems to be at odds with her voice. What I mean by that is that she divests an awful lot of passion to lines that tend toward advice-column bromides ("It's not the end of the world girl/ you'll find your place in the world girl/ all you gotta do is fight fire with fire … the bigger we are, the harder they'll fall"). It strains credulity to believe that these kinds of lines deserve so much passion; one has to wonder if there is something else there. Heartbreak seems to be a good place to start: the lovely "Coal to Diamonds" features few pyrotechnics but, perhaps due to its subdued performance, perhaps its subject matter ("I thought about it til my head hurt/I thought about it but it only made things worse") is her best.

The Gossip are fairly outspoken in their identity politics, so it's tempting to view the more cliché-heavy songs on this record through that lens (for after all, who doesn't feel passionate about their beliefs). I won't, not least because I can't see it and don't wish to embarrass myself, but also because this band can make its statement just by showing up. It's enough that the strongest and sexiest voice in rock is possessed by a proudly self-proclaimed fat queer woman. There is nothing as revolutionary as a good time, and it's enough for them to make records that are fun. This, to me, is combat rock: libidinous, hip-shaking and strong, it makes more of a point about the traps of sizism and patriarchy than can be found in any essay, or lyric sheet for that matter.