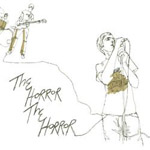 Hands on hips, folks: What the fuck is The Horror The Horror gonna do differently? The name’s ridiculous -- view it as an historic inevitability (someone had to name themselves this) or a too-obvious abomination, you’re still gonna get a groan when someone asks you what you just put on the stereo and you have to answer “The Horror The Horror” aloud, in public, with people looking at you.

But, well, that’s the thing. There’s a thousand reasons to dismiss this record offhand, but, despite the touted post-punk influence (angular riffs -- check), ludicrous hyperextension of the “The _____” band-name craze (check), and keening Casablancas/Doherty/Kapranos croons (triple check), you will still have to tell people the name of this band, because they will ask. The Horror The Horror is a smoking hot machine-gun debut, full of tightly-wound riffs, tense rhythmic compression and disarming vocal cascades. The band justifies doing exactly what so many other bands do by, quite simply, doing it better.

And I’m serious about that. You Could Have It So Much Better was a ham-fisted attempt at an eclectic, streamlined Franz Ferdinand; the last Strokes record was roughly 62% dogshit; the dancepunk bonfire of Hot Hot Heat and The Rapture has sizzled to lukewarm embers that barely heat hotdogs like Panic! at the Disco. The watershed new New York sound that so many (raises hand) championed as a fundamental rebirth of rock’n’roll was successful, sure, in that it spanned the globe and launched a few careers and spouted a few potential classics. But the Strokes and White Stripes are elder statesmen now, and the Walkmen and Liars are off the deep end, and even if Show Your Bones was good it still won’t spawn an earthshaking tearjerking megahit like “Maps.” The relevance of four-pretty-dudes-in-a-band making garage pop has, as a trend, waned, and a band like The Horror The Horror is left with a lot to prove. Especially with a name like The Horror The Horror.

Curveball! Did anyone see Silent Hill? I did. It was aight in the beginning, as long as it wholesale jacked the game’s music, sound effects, camera angles and pacing, but then it got highfalutin, decided to have a plot and stretched well past two hours. In short, it sucked, but at least at the end of the movie Satan emerged from the floor of a misty church in the form of (you guessed it) a little girl, who then, after 110 minutes of relatively restrained atmospheric horror, unleashed a torrent of hook-ended barbed wire chains that shredded every character of the movie into spiraling gore fountains and quivering Fulci pulp.

And that’s how many hooks this album has. (Zing! Dinner is served, motherfuckers.) To start with the worst of it, “Trainwhistle” features a perfectly modulated guitar line, all faux-synth shakedown shimmy and tight leather pants, that is straight up from Room on Fire. Like, it might be a sample. Kids cry “rip-off!” justifiably, but on the riff’s second iteration, THTH undercut it with a ferocious buzz and heart-attack cymbal skids; it gives the tone an instrumental fortitude the Strokes wouldn’t dare touch, and then THTH bless it further with ten seconds of pomp rock synthesizer sunbursts. The band again cheekily undermines its influences -- that is, its expected influences -- by making slowburn hopalong “Twice In A Lifetime” reach its unlikely climax with a cheekily recontextualized riff astute listeners may recognize as the one from “Marquee Moon.”

Other tracks don’t need to wink so hard, though; these deeply-thought Songs stand on their own merits. “Ipanema” has a towering structure, guitars ringing against one another to create a palpable, ever-escalating tension. The circular composition is watertight, never losing an ounce of momentum; if the beat from “Stay Fly” had a baby with the Followill brothers, it might sound something like this. “All I Can Do” rides cooing harmonies and quick, mantra-like vocals on the verses, before a chest-beating bridge and an unresolvable chorus (“I been lookin for a sign of the times / Didn’t wanna be another one”) neatly echo the hopelessness of the song’s title.

But all this exuberant musicianship, full of giddy dynamism and coy licks, is undercut by a very real melancholy. No band would jack Conrad’s crippling summary of the human condition without imbuing the music with a bit of Kurtz’s loathsome worldview, and, accordingly, no track that seems to be about both a suicide and a break-up should resound with the triumph that “Sound of Sirens” does. The slight crack of desperation and breathlessness in the vocal delivery on a line like “I want to figure out” (from “I Blame the Sun”) makes up for its unadorned sentiment. “De-Evolution According to THTH” features a self-loathing verse — “I’ve been bothering everyone / I’ve been watching holograms” — with choruses of tenuous longing. The despair and dissatisfaction let up for exactly one song, and the band accordingly red-flags it with the title “This is a Love Song.” The joke is funny, and like most funny jokes, it’s also very sad.

All of which is what makes The Horror The Horror such a surprising find in 2006, this year of Danielson and Lisbon and, I dunno, I guess kids dig the Fiery Furnaces again, too (go-fucking-figure). THTH present no challenge to the listener; there are no hurdles to overcome before enjoying these eleven songs. It is radiant pop music, and all the more defiant for it. That great rush of bands five years ago was fun and smart and new, but now they’ve all either sold out (Elevator), grown stale (First Impressions of Earth) or married Renée Zellweger. THTH is a thirty-minute reminder that, oh, yeah, a good song doesn’t need to justify itself with a global trend or a gimmick. It can just be good, and accessible, and pure. And that honesty might be what makes The Horror The Horror one of 2006’s most unlikely, enduring and inadvertently rebellious rock’n’roll records.