Other Records by The Killers 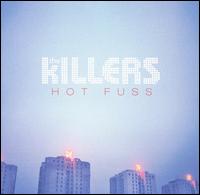 The Killers. You wouldn't have thought it would take this long for someone to snap the name up. They would surely wear hot-shit pin-stripe, three-piece, just-had-a-threesome-with-your-girlfriend-and-sister suits. They would have coiffed hair, black guitars, and would whip out, to the tune of sexy '80s post-punk, tales of danger, intrigue, and infidelity. Tales of infidelity involving your girlfriend, and probably your sister. And probably in the same song.

Like apparently every up-and-coming band of the past 18 months, the Killers have built a ridiculous amount of hype about themselves from the strength of a couple singles (remember the Yeah Yeah Yeahs, and recently, !!!?). "Mr. Brightside," their first single, immediately garnered them some well-deserved attention, and they only seemed to promise more and more as they then released "Somebody Told Me," which immediately topped the British charts. A number of recorded tracks from the Killers were available on file-sharing networks as well, but there was no sureness as to what was album-material and what were merely b-sides. Nonetheless, even what might have been b-sides were still promising; never mind that the Killers sounded like a Franz Ferdinand/The Rapture hybrid who were more indulgent of their New Order and Duran Duran '80s tendencies than either of those bands. They seemed determined to make bold and catchy, unashamed indie rock you could move to, and in today's climate that usually does just fine.

It's just that there's a problem; the Killers may have a dangerous name, but on Hot Fuss their sound just isn't, having failed to develop into much more than the promise established by their catchy singles.

But I've always been an advocate of the view that one reviewer's personal disappointment in a band that he's closely watched should not cloud the bright spots of the album itself. There are a number of them to counterbalance the song-writing failings that plague a few of these tracks.

Opener "Jenny Was a Friend of Mine" is one of the group's darkest moments, and it initially bodes well for the direction of the rest of the album, powering forward with churning guitar chords and an elastic bass hook. Its lyrics are uncharacteristically sinister, intimating a tale of rape as lead singer Brandon Flowers howls, "There ain't no motive for this crime/ Jenny was a friend of mine," and "She couldn't scream when I held her close/ I swore I'd never let her go." The band continues in its darker vein with the just-a-touch lighter "Mr. Brightside," with its clear-toned guitar hook and worried lyrics: "And it's all in my head/ But she's touching his chest now/ She takes off her dress now," as the song's narrator worries over his girlfriend. Flowers's vocal performances, sometimes out-of-key (a la Luke Jenner), but always infused with a hell-out-of-the-gates urgency, help define the band's sound, along with their bouncy bass lines and '80s pop tendencies. It's just that their reliance of their influences (a worrisome Oasis nod is mentioned on their site) sometimes approaches laziness.

The band's first sign of over-reliance on easy synth hooks comes with "Smile Like You Mean It," whose solid lyrics ("And someone will drive her around/ Down the same streets that I did") and emotional power are not supported by the songwriting strength of the album's first two tracks. Instead, a three-note synth hook is used as a crutch during the rousing chorus, and undercuts the song; a simple guitar solo is not enough for David Keuning to save face for his absence throughout most of the bass-led verses. The problem recurs in "On Top," whose clever, unpredictable bass line is overshadowed by synth hook that seems an excuse for a lack of guitar chops.

Elsewhere, weakness crops up in the song that would kill to be your summer anthem, "All These Things that I've Done," which relies disappointingly on power chords during its chorus after starting off with a promising U2-style high-pitched guitar hook. Its bridge lyrics might encourage sing-alongs if you can ignore the fact that -- is actually singing "I've got soul but I'm not a soldier." Ignoring the utter irrelevance of soul to anything this band has produced, it's a half-hearted stab at political commentary that seems puerile at best. "Andy You're a Star" begins with interesting and subtle raw guitar-chord shifts before exploding into uninteresting power chord thrashing as Flowers sings off-key "Andy you're a STAAAAARRRR!"

There is one moment where the band's reliance on power chords does take a very tongue-in-cheek charm; "Indie Rock and Roll" is chock full of ironic lyrics about "glamourous indie rock and roll" before ripping into full-measure extended power chords. It's a strikingly honest acknowledgment of every band's ambivalence when it comes to the choice of trying to make it big, or sticking to "indie" roots.

And as if to assure us that they've not abandoned the true faith, the band hits two moments towards the end of the album that make up for previous mistakes: "Believe Me Natalie," a furious last-call for youth and disco over a brutal and creative rhythm section, and "Midnight Show," whose absolutely retarded lyrics ("You've got a short skirt / I want to look up") are covered over by its U2-inspired guitar licks and wicked bass work. The band has Ronnie Vannucci to thank for a surprisingly consistent and inventive rhythm section throughout the album, but the weight he carries isn't as consistently matched by the other band members' contributions.

Not to mention that that their closer is, unfortunately, god-awful. Tedious and out-of character, the Killers finish Hot Fuss with a sag, as "Everything Will Be Alright" plods on out-dated synths and laborious, boring atmosphere, absent their propulsive drumkit. In an album that gives hope for the future by virtue of its sheer energy and bombast, the Killers should've closed with a fucking explosion, not this brain-fart. It's the final and lasting signal that the Killers remain a band with that pernicious "great potential" qualifier. I wish they could've delivered immediately, but it seems we'll have to wait to see if these well-dressed kids with a bunch of '80s blueprints and some obvious talent can mature into sharp adult songwriters with hooks (not looks) that could kill.