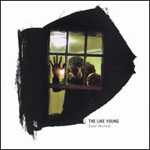 Pete’s review of It’s Never Been Like That is spot on: something to “throw on to just sit back and bask in the summer.” Even SUBWAY and Viennese radio adore this stuff -- buzzsaw breakneck air guitar slammers, rich in hummability and hooks. Last Secrets fits very neatly into this field; its thirteen shots of adrenaline compose a blow by blow winner similar to those released by the Figurines and Phoenix earlier this year. Except where those two groups respectively utilised Neil Young and, uh, the Strokes as reference points, the Like Young are all over Cuomo’s halcyon ’92-’99 songwriting period. As an unabashed Weezer fan, this is great. Rivers hasn’t released anything of serious worth since the S2K live material, and his brand of emotive, haunting melodicisms is missed in today’s emotive, haunting alternative mainstream. Ozma did a fantastic job with Rock and Roll Part Three of taking up the baton, but the Like Young don’t risk pastiche, managing to fudge and smear the edges of the envelope without pushing very hard. Plus, they’ve got identity to spare.

This sense of personality permeates the production of the record. It’s spare and hostile, but maintains the unerring focus of other two member bands. “Obviously Desperate” begins as a slow build, steeped in a recurring guitar motif for a minute before exploding into the kind of double-timed relationship diatribe that would be plastered with hollow grandeur and overwrought instrumentation by a group like the Killers. The Like Young know better than to fuck around -- and Last Secrets is replete with a steady ream of intuitive songwriting. No idea is spun into tedium, and even the most rudimentary guitar lines (see: stolid plectrum, “Almost Said Yes”) are wound into muscular gems. Witness the haphazard riffing of “Hard Stress, Soft Skin” basking gloriously in its own simplicity, or the pop nous shining its several choruses patched together from intense expressions of guilt and bitterness, or the strident vocals of Amanda and Joe Ziemba complementing each other in grizzle and glamour, harmonising on the discordant hook: “It hurts, doesn’t it?” The song ends in repeated, feedback drenched guitar stabs, squalls, whispers, and echo.

Indeed, for an album that sounds like the brunt of summer, its imagery and intonation are thrillingly autumnal. The tired and beleaguered slow drive of “Inner Fantasies” stops short after a dramatic pause to give way to a withered and sustained guitar chord bouncing left and right as Amanda’s whispered “I know you too” melds with the peripheral white noise. It’s a requiem -- a nightmare purge -- after the coy and grandiose instrumentation of album opener “The Hell With This Whole Affair.”

The mood of Last Secrets is unremittingly dark, every trebly hook undercut by the bass overdrive of the thunderous guitar, and the album relies on the same paroxysm of vulnerable callousness that defined Pinkerton, each moment of beauty weighed down by the surrounding musk of despair. The key difference here is that, unlike Weezer, the vocals are not cut into sharp relief, but are foggily edged out by the overbearing push of the backing track. As a result, it’s hard to locate subtleties in the sound, or nuances that separate each track, which means that for all its short-term frolics, the record lacks the variety, or the comic self-loathing, of Cuomo’s magnum opus.

Even so, it’s impossible to deny the Like Young this highly impressive achievement: even though it strictly operates in one gear, Last Secrets navigates all the richness the high road has to offer.