Other Records by The Lovely Feathers 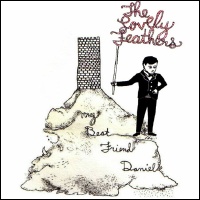 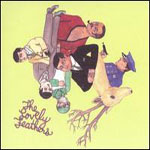 On last year’s My Best Friend Daniel, The Lovely Feathers sounded like a band that could be capable of greatness, if only they could manage to take their songs seriously enough to make them truly affecting. The album had a sloppy, thrown-together-in-our-drummer’s-basement-in-
an-afternoon vibe, but that was part of its charm – a band playing songs for itself, reveling in its own wackiness while giving their quite memorable pop hooks just enough room to breathe to make it all palatable. It was no Slanted and Enchanted, of course, probably not even a Who Will Cut Our Hair When We’re Gone (though it certainly wanted to be), but it was sure a lot of fun, and when I first got a hold of the follow-up Hind Hind Legs, I felt a little pang of guilt for having not picked it up for several months. Suffice to say, unfortunately, that having spun the new record four or five times that guilt has pretty quickly turned to indifference, as HHL finds the Lovely Feathers trading spontaneity for polish (well, relatively speaking), and turning what once made their music unique and funny into an occasionally irritating shtick.

The polish isn’t necessarily a bad thing – MBFD’s ragged sound probably didn’t win them a much bigger audience than their immediate circle of friends, and Mark Kupfert and Richark Yanofsky’s melodic chops deserved someone behind the boards who knew what they were doing. The band probably wants newcomers to see HHL as their real debut; five of the album’s fourteen tracks are re-recorded versions of some of Daniel’s better songs, but in most cases they feel neutered. “Like You,” in particular, suffers the worst. The band slows down the tempo, and exaggerates the vocal histrionics (all while barking out such love-em-or-hate-em gems as “hey Mr. Fleece / You’re talking to the man with the penis”) to aggravating lengths – the song comes off sounding like some kind of psychotic power ballad, but probably not in the way it intended to. The band wisely chose to reinstitute the sublime one-two punch of “Photocorners” and “The Only Appalachian Cornfield” as the album’s centerpieces, and they stand as the only revisited Daniel tracks given more immediacy this time around.

The new songs are a mixed bag. Opener “Pope John Paul” has an inventive structure and some catchy moments, but with a ridiculous call-and-response chorus like “Pope John Paul / Where you from? Krakow, Poland!” it still feels more like an in-joke than a real song, as if someone at some point happened to say to one of them “yo, wouldn’t it be hilarious if you guys wrote a song about that dead pope?” and they just took it as a challenge. Much better is “Rod Stewart,” which slyly parodies Stewart’s dreadful “Do Ya Think I’m Sexy?” with the chorus “if it’s just my body you want / then come on and tell me” over infectious but fairly straightforward guitar pop. “Frantic” and “(Rome) Is In the Valley” are similarly catchy, and “E-Man’s Sorrow” would be a definite stand-out were it not for its closing refrain of “I don’t want to die” being a somewhat shameless reminder of the band’s huge stylistic debt to the Unicorns.

So while Hind Hind Legs isn’t without its charms, it’s hard to see it as anything but an unqualified disappointment after the inspired psychosis of The Lovely Feathers’ debut. The band chooses to refine their sound without doing the same to their songs, and the result is an album that feels too awkward in its own skin to be very memorable. It’s certainly no reason to write the band off, but it seems to me that they’ve taken one step forward and two steps back, and if they want to survive they’ll have to either embrace maturity or madness, or at least find a less aggravating way of wedding the two.