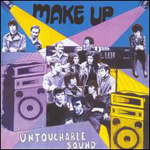 Yours truly caught the Make Up on their final tour at Princeton University’s fabled Terrace Club; a dilapidated mansion that’s out of step with the rest of the idyllic campus, and a haven for the maybe 13 or 14 bad-ass hipsters enrolled there. It also plays host to a variety of indie-rock shows, something which comes in very handy for the music-starved Rutgers students up the highway. The ladyfriends I dragged there were complaining the entire car ride, and kept commenting how “the crowd is spending tons of money to look like they just rolled out of bed” (true that). But they still emerged from the Ivy League seemingly reborn; true believers in the power of the “Gospel Yeh Yeh” sound. It was a hell of a show made enjoyable by frontman Ian Svenonius’ signature antics, some of which included making out with dudes in the front row, fellating the microphone, hanging from the rafters, and imitating a gorilla between frequent shouts of “yeah” and “hold on now”! The music, a lo-fi melange of MC5 guitar, mangled electric keys and Motown basslines, wasn’t half bad either.

It's fun to speculate what might have happened to the Make Up had they not elected to call it a day in 2000. They were still pretty damn popular amongst blogger types at the time of their demise, and yet maybe a year or so removed from the Strokes/Stripes mania that would render their brand of self-consciously lo-fi rock all the rage. Perhaps realizing this, Svenonius still rocks out in the far less interesting Weird War, who live up to the first half of their moniker in that they’re essentially The Make Up in every respect except name; containing virtually identical personnel and playing the requisite brand of lo-fi sleaze that Svevnonius already made his name on ten years ago.

Chances are though that Weird War aren’t capable of achieving the heights that the Make Up did on the random night in 2000 that Untouchable Sound is taken from (the uncharacteristically skimpy liners only give you the year and the D.C. location). While each of their four studio albums is plenty good, they’re all rendered moot by the live show because none of them afford you the twin experiences of Svenonius’s hilarious stage banter and the fact that his band’s raucous onstage energy levels allow them to just barely be able to play in time. Recorded a little after the release of 1999 swan song Save Yourself, Untouchable Sound also features nearly every song on that record, presented mostly in extended versions, and in the case of “I Am Pentagon,” completely different keys, which may or may not have been intentional. A somewhat slight tune on Save Yourself, the live version of the aforementioned is an album standout, finding Svenonius channeling Jim Morrison over sheets of Doors-y organs while fashioning coy come-ons from geometric shapes (e.g. “are you isosceles?/or is your angle 90 degrees?” Genius).

The organs on “I Am Pentagon” deserve special mention if only because Untouchable Sound has oodles of them; the late ‘90s marking the point in the Make Up’s short history where they began to utilize the electric piano as much as their guitars (if not more so). Nowhere is this more apparent than on Make Up signature tune “They Live By Night” which while initially presented on Destination Love as a “Wild Thing”-style three-chord rocker, is virtually unrecognizable here as a Wurlitzer-driven, herky-jerky thing made impossible to dance to on account of the band playing in what sounds like two different time signatures over Svenonius’s shrieks of “Here we are drawing lines in children’s blood!/Building new arks for the bringing of new floods!” (that lyric from ‘bringing’ is an approximation, I can never figure out what the hell Svenonius is saying there). An uber-funky clavinet is heavily featured in the furious groove of Save Yourself track “White Belts” and man does James “brother of Brendan” Canty pound the snot out of the Wurlitzer in the last two minutes of “Wade in the Water.” Desecration of instruments is a common theme throughout a Make Up gig, and it’s a wonder that any of the electric keyboards used were still functional after this show.

And it was this sort of unbridled energy that earned the Make Up their reputation as a band far more suited to the stage than the studio. While a hot live show isn’t exactly an uncommon thing amongst the current crop of lo-fi revivalists, nary a working band today quite does the rock thing with the levels of humorous panache that the Make Up derived from the Gospel Yeh-Yeh sound. Untouchable Sound documents the phenomenon quite nicely.