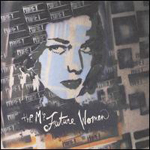 We here at CMG Labs have been working on a groundbreaking study of pop music in the last few months (face it, it's the only thing worth doing till the good records start rolling in again). While some of the physics/math/witch-doctory involved is, understandably, of a questionable scientific nature, we're pleased with our results. The general formula devised is as follows:

where "Q" stands for the quality of the musicians involved with the recording, "T" is temperature (degrees Celsius) of the city in which the recording took place, and "R" is the quality of the ensuing record. This is to say, while the quality of the musicians involved in any recording process is important, we have found that temperature is an equally important factor. To be more exact and to the point, cold weather leads to great pop music. It should be pointed out that we excluded California from this study -- simply too complex for our mathematical models at this time.

It takes little observation of the current music scene to confirm our findings. Where were the best pop records of 2005 made? Canada (New Pornographers, Russian Futurists), the UK (Magic Numbers, Field Music, Super Furry Animals), and Chicago (Devin Davis). Sure, there have been claims that this is purely a descriptive study and that proving causation between temperature and pop music is impossible, but c'mon, George Bush convinced plenty of people that Iraq and 9/11 were connected.

We wouldn't dream of coming to you without further evidence, however, and thus I present The M's. Now there is no denying that The M's are a talented bunch of guys. Josh Chicoine, Steve Versaw, Joey King, and Robert Hicks have been circulating in their respective music scene for awhile. However, it took the vicious cold and stiff winds of Chicago to bring out their true potential.

The M's proper debut, Future Women, comes on the heels of 2004's eponymous EP collection. It's an assured, fully formed, and at times brilliantly catchy little pop album. Sure, it's not perfect, but that usually requires recording in Halifax or some related ring of hell.

When they're on, the M's are nearly untouchable. Opening duo "Plan of the Man" and "Shawnee Dupree" are two excellent examples of this. The former hams it up, dashing headlong into the album with a throw-away punk-pop guitar riff and multi-part harmonies. The latter goes the other way, relying on clever wordplay and a slow strut of a drum beat. Later in the album the band manage even better. "Trucker Speed" is the catchiest track of the still-young year, milking that guitar feedback for everything it's worth. "My Gun" plays a similar game and succeeds nearly as well, aside from a weak chorus, while "Darling Lucia" closes the album on a surprisingly sweet note.

Sure, the lads don't manage to quite keep up the pace through the entire album, but they come close. "Going Over It" is a bit too repetitive to be really enjoyable, while "Never Do This Again" is overly derivative (though I still can't quite put my finger on what). Aside from these two duds, Future Women is a remarkably consistent and quite good debut record. If this doesn't prove our point, then I doubt we ever can.

Next week: the importance of bad teeth in post-rock.