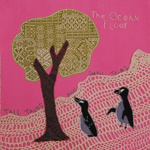 The Ocean Floor -- essentially the nom de plume of principle songwriter and performer Lane Barrington -- is the collaborative audio equivalent of a Wes Anderson flick, and the accompanying "Floorchestra" his cast of Tenenbaums. They're couched in the outwardly inane, finding epiphanies like buried treasure in the minutia of the everyday and the personal, sculpting cockeyed fairytales from the convoluted eccentricities to be found in seemingly normal situations. And if Barrington is Anderson, the auteur who asks us to delve into his world rather than meet us in our own, and Tall Tales & Small Tales is his child, then it may be a little bit touched in the head. Enamored with a sense of wonder and fascination while never supposing that the novelty of any given situation can ever run out, the album is a loot bag of bejeweled sounds and Barrington’s lyrical versions of a suburban magic-realism. It contains anti-cynicism in concentrated form and whimsical weirdness for weirdness’ sake, all of it bypassing twee’s often overbearing preciousness and supposition that being calculatedly unconventional or childlike should be enough.

Behind Tall Tales & Small Tales’ preliminary spazz-folk surface, defined at first by Barrington’s silly-voiced falsetto, are musical arrangements that are complex, enthusiastically creative and unpredictable. Each song is an accumulation of arcane discoveries, trinkets hidden in seemingly arbitrary fashion throughout the overcrowded, creepy grandmother’s home the album-as-whole provides. Generally acoustic but quick blossoming -- and in the least obvious places, with horns and strings, banjo and bells -- each song testifies to Barrington’s songwriting versatility; listed as the primary performer of most of the album’s varied instrumentation, Barrington displays an impressive and accomplished scope without sliding into pedantic virtuosity. Similarly impressive is that he maintains his idiosyncrasies. The Ocean Floor’s a cipher-less puzzle that remains steadfastly personal and never lectures, is perfectly happy to be alone (and have fun) in its weirdness. Populated by childlike characters and hyper-personified emotions, the album is a Neverland of Barrington’s own design.

The seven-minute “Bedbugs” starts with jittery, tremulous strings over pleasant acoustic undertones, providing just one of the album’s many and near-constant odd-ball declarations: "I’m so excited now / I probably shouldn’t say / I've got a big date with a librarian today!” The line sort of hangs there, satisfied with the pseudo-novelty of its own mild geekiness -- critic bait for those who fell off the Napoleon Dynamite train early. But in the context of the song’s sincere enthusiasm, and preceding the line that it does (“Our talking books will all shut up and they’ll have to listen / And when the night is done they’ll open up again”), it no longer seems as premeditated and strained in its humor. There’s a moment where you realize Barrington might actually mean it, and the sooner this moment takes place the sooner Tall Tales endears itself.

"Pillows & Molasses" is tougher to crack; it may or may not be about bears, has a narration about an airplane, kitschy DJ scratching (replete with "put your hands in the air and wave them like you don't care"), and arbitrary, adventurous contributions that last only a few ADD-fueled seconds. "Inner Ear" is the most accessible track on the album at just under two minutes, and also the catchiest, but Tall Tales is about diversions and distractions. The succinctness of “Inner Ear” seems almost an obligation. Like how without chores there would be no escape, that kind of thing.

"Every Grass Stained Day"'s title summarizes the nostalgia and playfulness of the Ocean Floor's music as well as its almost vaudevillian shifts in moods. A piano line that could be out of an elementary school performance gradually finds its way to a busy marching band outburst and a moody, elegant close. The song feels episodic and disconnected, the same way cartoons feel broken up by commercial breaks and their ensuring hyperbolic action. But “Every Grass Stained Day,” and most of the music on Tall Tales, doesn’t capture the two-dimensional emotional pap of Saturday morning cartoons. It’s about the experience of watching them, the breakfast cereal and the day that follows.

And, like that, the album ends with the same disjointed suddenness, with Barrington denying conformity to conventional album structure the way he purposefully keeps his songs from the
"maturity" of straightforwardness or clarity. As a jumbled bag of sounds and melodies the album is as memorable as the controlled chaos of childhood it evokes.