Other Records by The Raconteurs 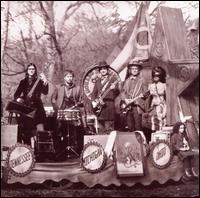 The Raconteurs: Consolers of the Lonely 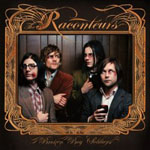 (Judge this album by its single. Envy gross preconception for its convenience. Accept what is expected, and leave the affair at that. Assume the worst in the whimsical; introduce the whimsical as a rhetorical contention; rephrase the rhetoric as a koan. Inculcate overconfident conjecture into criticisms of multi-millionaires. Forget the Von Bondies. Remember Meg White. Read these words carefully and follow orders.)

“Steady, As She Goes,” whose fusty production, lame lyrics, muddy drums, predictable structure, and dreary, pointless video may have already begun to incubate in your earholes, serves well as masthead for Detroit ultra-conglomeration The Raconteurs. Drummer Patrick Keeler and bassist “Little Jack” Lawrence, two of the Cincinnati garage/blues trio The Greenhornes, reasonably recede behind their more charismatic and flamboyant frontmen. Jack White squelches both in timbre and choppy riff, hostilely sharing vocal duties with Virgin exile Brendan Benson. An alluvium of keyboard buzz sifts underneath the power pop, a filler both instrumental and noisome to the band’s “personality.” In other words, Broken Boy Soldiers wears audience presumptions as chain mail: yes, the songs will be a catchy mock-up of stringy garage rock and Midwestern pop, and of course, their locus will be Detroit and V2, and the White Stripes will forever be a standard of discourse, but these will be points of juxtaposition, they say. A way to understand a looser, charmed Jack White. “Steady, As She Goes,” the first song White and Benson wrote together, they say, was the moment they realized they could be a band instead of singularly revered indie personalities.

(Ditch the title “Detroit Rock City,” I say. While still buttressed by some rock greats, KISS not being among such, the city cannot be a haughty Mecca, carrying a term both overwrought and currently irrelevant. The White Stripes have surpassed their home turf in Conan leaps and Coke bounds, which was inevitable and satisfying for longtime fans, and we can only hope, somewhere, ICP is dead. Use, instead, “Detroit Way To Go City,” an interjection as encouraging as it is a suitable denunciation of the city’s state of being.)

So, by adamantly asserting their existence as a true blue unit, listeners are dared to find comparisons to and dominance over progenitors. Yet, Jack White’s strengths as a songwriter are the strengths of the White Stripes; The Raconteurs struggle between simplicity and dirty spontaneity, an intractable difficulty that usually breathes excitement into White’s melodies, here seeming repetitive, forced, and ultimately dull. Maybe it’s because Keeler’s shuffled drumming, technically more proficient than the other White’s, never lets up and adores the hi-hat. Maybe Benson’s fey sensibility can’t let white space well enough alone, or maybe Jack White, now suede jacket…raconteur instead of unnerving toreador, wants to indulge in the tropes of amicable bandom. All in all, Broken Boy Soldiers is really freakin’ bland.

Granted, “Broken Boy Soldier” carries heavy portent in reeling acoustic twang and dynamic volume shifts. “Intimate Secretary” pulses through whirling keys, chugs on some glorious arguing between White and Benson. And, OK, “Level” and “Store Bought Bones” rock in identically jarring repetition, a gratifying release from the logy pace of the album’s inane middlepiece, “Together.” It becomes quickly apparent, though, that the variance in tracks, from AOR “Hands” to bruised black “Blue Veins,” is a flaccid sheen over a bunch of pale, unimaginative alternative rock ditties.

Reluctantly, I must admit that this album, while neither excellent nor terrible, rests in the topographically flat torpor of self-satisfaction and artistic contentment. Nothing is really very exciting here, or very interesting, and this leaves half-brained questions of aesthetic choice and lazy nostalgia. What I mean is that the Raconteurs don’t have much aesthetic inventiveness besides the infuriating and insular production choices, and left with nothing any more fun as a listener, comparing the aesthetic of this band to the Stripes renders BBS in an even more ugly light. The total is so permeated by ennui that I feel compelled to yell into my speakers, into the faces of these neo-idols, and inject some fervor. Some anything. Cripes.

Let me save you the stress. Everything you need to know is there in the opening track. Only my bossing you around is going to get you much further, gonna get you through the monolithic forest of Subverted Expectation and Renewed Simplistic Intent. We can’t each do this on our own, alright? (Disobey and you’ll be sorry.)