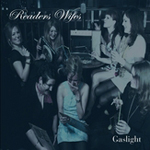 The Readers Wifes are dear to many Londoners as resident DJs at Duckie, an institution in London's gay scene and the only place I am aware of that will play vintage B52s, the Cure, and Desmond Dekker. Of course, there are many alternative gay nights in London: the indie stalwart Popstarz, or the electro-hotbed Nag Nag Nag. But I have yet to come across one that melds such musical eclecticism with the opportunity to see stripping magicians, Thai dance, or live performances from unsigned punk and electro bands.

It is this eclecticism that is both the charm and the chagrin of Duckie and the Readers Wifes. The group has perverse musical tastes; they have been known to play novelty hits such as Sandie Shaw's "Puppet On A String" or un-danceable tunes like "Band On The Run" in the middle of a set. They can also turn grown men into fanboys by digging out obscure Northern Soul records or forgotten glam rock gems from bands like Sparks. I, myself, have been both fascinated and frustrated by the musical hodgepodge while dancing on a Saturday night (how do you dance to "Wuthering Heights"?), so I was curious to see how they would translate their tastes when they formed a band and started crafting pop songs of their own.

In 2002 they released their limited edition debut double A-side "Bitch At The Brits/Fuc Dup" to general confusion on their own Bearcage label. Just two sneered spoken word narratives -- about awards shows and a real life fist-fucking porn star over stripped dance tracks -- the single seemed like a wry joke rather than a true stab at a pop career. Even 2003's Steve Severin produced follow-up "Scumpop," a trashy meld of Fischerspooner's bleep assault and Shampoo's aggro vocals, seemed to be another in-joke that we had been invited into. Skip forward two years to 2005's "Nostalgia" and the sound became more cohesive. Having employed Kiki & Herb's Justin Bond on lead vocal (with typically exaggerated drawl intoning humourlessly like Kylie on "German Bold Italic") they had transformed into a brash street-fighting Pet Shop Boys with astute tongue-in-cheek lyrics -- "There's no money in the underground." Although a relative success (it had a low placing in the UK independent charts and had garnered the band coverage outside of the local gay press), the Readers Wifes were still seen as DJs first and a band second -- the view exacerbated by their less than prolific release schedule. Even so, no-one had thought that it would take another two years before their debut album saw the light of day.

Gaslight is a trim eleven-song amalgam of all the things the Readers Wifes stand for: perversion, mundane glamour, smudged make-up, and skewed electro-pop. And even though the wait has been inexcusable, this album does make more sense in 2007 amidst the Italo Disco revival and the success of acts such as Junior Boys and Sally Shapiro than it would have during the garage rock fever of 2005. As the opening heady throb of "I Love You At 20,000 Feet" pulsates through the speakers you might recall the ugly-trashiness of Gina X Performance and the statuesque ice-cold atmospherics of the Pet Shop Boys.

By the time "25 Floors" begins, the lovers and the haters will decide which camp they sit in and split. Humping and croaking like DAF on 40 cigarettes a day, it's not a track which will endear itself to most: if the retro production doesn't turn them off, the lyrics about sex in tower blocks might. Which raises an important point. I'd suggest that, at least generally, sexuality is pretty irrelevant to music as a whole (all you have to do is look at the difference in output between Hüsker Du and Elton John for confirmation). Still, there was some glee in hearing evocations of "gay music" back when it was underground, like DAF, Man 2 Man or Garçons. Now, especially in a world where the flamboyant jestering of artists such as the Scissor Sisters represent a hackneyed vision of the asexual queer, the Readers Wifes nicely reinstate cock and balls to their rightful place. Whether it's the late night cruising "Shiner," where vocalist Chelsea Kelsey leers "let's ride rough shod and hide from God," or the witty attack on the micro-ghettoization of gay sexuality of "Gays In Suits," the band manages a particular brand of seediness that most overtly "sexual" artists don't actually manage to pull off (if you'll pardon the pun).

But whatever the attraction of the band from a social standpoint, we must examine the music. Vocalists Kim Phaggs and Chelsea Kelsey are not the most naturally gifted singers; their penchant for spoken word intervals can tip songs from camp into ridiculousness quickly; prime examples are "Sixteen" and "Black Silk Stocking," the latter of which seems at times like a pastiche of the Prodigy's "Breathe." There are also times where the production sounds retro to the point of sounding incredibly dated, most notably on the keyboard horns of "Cheap Dress" and the string pads of "Weekend -- Colder Brighter." These are observations I make hesitantly; no one would have guessed from their inauspicious beginnings that the similarly retro Pulp would be able to create an album like His 'N' Hers (1994) with similar ingredients.

The biggest disappointment here, of course, is that the band has failed to translate the raucousness of their infamous live shows to tape. This is mostly due to the muting of Mark Satanic's guitar; his punk edge that helped to put the comically vitriolic vocals in context would have lifted "Boy Ain't Right" from being an OK Saint Etienne song to being a great Readers Wifes song. Which is a shame, because this signpost of an alternative gay scene -- one that has thrown up such diverse acts as performance art punks K-Tron and the Exploding Triangle and scuzz-electro outfits Yr Mum Ya Dad and Atomizer -- isn't going to draw attention to that scene by setting the charts or the world alight with its brilliance. I'd still say its worth the investigation, but be warned: just like when I attend their set at Duckie, I am left confused, frustrated, and fascinated.