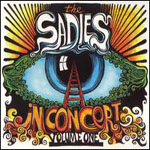 Fact #1: I have never seen The Sadies play live. I’d been doing an okay job falling asleep at night recently, too, and then this so-new, super-live double-album came into my life, and I realized that the aforementioned fact is not merely a fact but a deep, personal shortcoming in need of immediate rectification. Fact #2: I have to see The Sadies play live.

Sure, with a posse like this, one might argue that any jackass with a guitar could make an impressive record. After all, over the course of the 41 songs on In Concert, Volume One, The Sadies are supplemented in turn by Neko Case, Kelly Hogan, Gary Louris, The Good Brothers, Garth Hudson, Jon Langford, and Jon Spencer, among others. Wrap all that up with recording and engineering duties handled by the unimpeachable Steve Albini, and you’ve got a recipe for success no matter who the fuck the band in front is, right?

Well, wrong. With a decade of experience and five records under their belt, not to mention an impressive slew of collaborations and tours (exemplified by, ahem, this record), The Sadies are one of the strongest, tightest alt-country outfits active. Yes, the world-class collaborative talent helps, but you get the feeling that even without the luminaries they share space with on the record, this band slays live. The superstar collaborators are just there to be a part of the fun; they’re there to see the Sadies, too. Incredibly named fraternal guitarists Travis and Dallas Good, bassist Sean Dean, and drummer Mike Belitsky are a brilliantly cohesive unit at this point, and they certainly don’t falter for a moment over the course of In Concert, Vol. 1.

Space, time and CMG’s server space render impossible a full mentioning of all the moments that make this record great, especially given the wealth of songs and source material, but there are a few undeniable standouts. The Sadies make especially good use of their female vocalists, letting Kelly Hogan cut loose on “1,000,002 Songs,” and Neko Case belt out both her own “Hold On, Hold On” and Roger Miller’s “Jason Fleming” with gusto. Jon Spencer, as is his wont to do, plays his ass off, giving all the Heavy Trash tunes here extra snarl, especially “Justine Alright.” Andre Ethier’s “Talking Down” sounds like Dylan in a knife fight; Dexter Romwebber’s “Lonely Guy” is both soulful and rollicking; “Why Be So Curious,” originally off The Sadies’ excellent Favourite Colours (2004), is just as sun-kissed and poppy as it was meant to be.

The song choice is impeccable throughout. The focus is on The Sadies’ own material through the first eleven tracks, but then they begin to branch out, showcasing their collaborative firepower and running through a few favorite covers. The two jaw-droppers among these latter songs are a dead-on cover of Pink Floyd’s “Lucifer Sam” and the closing track, a brilliant take on The Mekons' classic “Memphis, Egypt,” led by Jon Langford himself. Langford’s other contributions are not to be overlooked, but the sheer anthemic power of the closing track is a startlingly perfect way to close out the record.

One gets the feeling, by the end of “Memphis, Egypt,” that if the Goods and their rhythm section had been around in the ‘60s and ‘70s, they’d’ve found kindred spirits in the inimitable Band. There are clear parallels -- Garth Hudson’s presence, an upcoming recording date with Ronnie Hawkins -- but more generally there’s the sense that, over the course of the last decade, The Sadies have embraced the ethos and spirit of The Band: supremely creative, comfortable in any number of genres, and a sure match and creative partner to nearly any musician. Bands of that caliber and breed are rare these days, and In Concert, Vol.1 gives a little over forty reasons why that shouldn’t be the case.