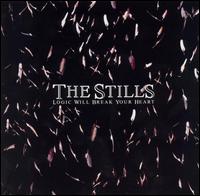 Logic Will Break Your Heart

Any music critic worth his salt will tell you that it's seldom a good idea to make snap judgments based entirely off of an album's packaging, but I'll be damned if some bands don't invite it. I'm not sure if The Stills are using the stark, New Order-style lettering and feather collage (from fallen angels I would presume) that adorns Logic Will Break Your Heart to announce that they're pretentious fucks, but a quick glance at the song titles erases any doubt. Let's see; "Love and Death," "Still in Love Song," "Changes Are No Good," and (my eyes are rolling as I type) "Yesterday Never Tomorrows." Based off of such info, you could probably guess that The Stills are yet another '80s obsessed, gloomy rock band attempting to cash in on the resurgence sparked by Interpol's success. But you'd actually have to listen to Logic Will Break Your Heart to realize that it sucks ass, doing frighteningly minimal justice to the '80s post-punk bands that The Stills obviously adore. For all of the hype that went into this band, their debut sounds like the work of amateurs; pretentious and difficult to enjoy.

Let it be said that I have no problem with the genre of music to which The Stills pledge allegiance. Turn on the Bright Lights was easily one of my favorite records of 2002, and I love me some Joy Division and Bunnymen as much as the next cheesy hipster. Furthermore, unbridled pretension is only problematic if your songwriting isn't strong enough to carry the weight. Radiohead and U2 are two of the most self-important bands on the planet, and yet nobody seems to mind. The Stills attempt to reach such lofty heights by throwing not-so cryptic 9-11 references into nearly every facet of Logic. But frontman Tim Fletcher is no Springsteen, and you too will snicker when he bawls about "brains on a brick wall," "next week's chemical blast" and how "love and death are always on [his] mind." Fletcher's goth poetry clichés would be easier to dismiss were they accompanied by something approaching exciting music, but this is not to be.

Speaking of Tim Fletcher, one of the biggest obstacles to enjoying The Stills comes in the form of his voice, which took about 10 minutes to get on my nerves. "Mannered" doesn't even begin to describe this guy; he makes Chris Martin sound like Mike Patton by comparison. Vowel sounds are stretched out to ridiculous lengths (e.g. "scar" becomes "schooooool"), and it seems like Fletcher sings every sensitive line with his eyes closed, the effect being both melodramatic and unfortunate.

The one band that is constantly mentioned in conjunction with describing The Stills is Echo and the Bunnymen, and while there are definitely some similarities in terms of cavernous, trebly production values and percussive bass, your dog-eared copy of Heaven Up Here will sound better than you ever remembered it being after you've spun Logic a few times. Anyway, Echo axeman Will Sergeant's lead lines are generally more imaginative than the shoegazer-ish riffs and Fables-era R.E.M. jangle that Stills guitarist Greg Paquet seems to prefer. Logic is also far more lethargic than any of the early Bunnymen albums, and even after forcing myself to listen to the record a number of times, only a handful of the songs stick out from what's generally a sonic murk. The closest thing to a memorable lead guitar line comes within the first minute of "Ready For It," and that's only because it sounds like a high school band playing The Cult's "She Sells Sanctuary" in the wrong key.

I slam because I care, and I would not bother writing about The Stills if I didn't believe that should they cease to take themselves so damn seriously, they have the potential to be a much better band. As such, a handful of songs keep Logic from being entirely unlistenable. "Lola Stars and Stripes" might be the best thing here; opening the record with walls of shoegazer sound and a post-apocalyptic love story of sorts as Fletcher intones, "Lola, Lola, will the world end me and you?" It's silly and poignant in the same way that 60's teenage death songs are silly and poignant, and catchy enough to earn the title of "Stills song most likely to be played over the closing credits of the O.C." (I mean that as a complement). Then there's "Still in Love Song," which already appeared on last year's (somewhat decent) Rememberese EP, and is what initially drew me to the band in the first place. It's inclusion on Logic is frustrating in that it's a unique goth-dance song with a well placed bass hook and disco drums, but it's a mere tease, sounding nothing like the rest of the album. And despite its horrendous title, "Yesterday Never Tomorrows" is a surprisingly enjoyable piece of jangle pop in which to their credit, the band actually sounds relaxed.

Even with the snowstorms of hype that have a notorious tendency to cloud hipster vision, it boggles my mind that at least more than one indie website (and/or major publication) has hailed Logic Will Break Your Heart as a modern day classic. It's a thoroughly murky, unexciting record which suffers from indistinguishable songs and an aura of pretension that it can't possibly justify. Hopefully The Stills will realize by album number two that it's far easier to swallow the unspeakable pain of being in a rock band in your early 20's when it's accompanied by something other than unmemorable '80s retreads. Love and death are bitch, but even Joy Division covered "Louie, Louie" at their live shows.