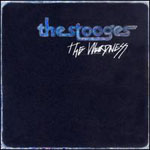 Please. I’m not about to go British music press on your ass to convince you that the new Stooges record is actually good. It’s not. But it’s hardly going to “put a real chink in this great band’s legacy” (here’s looking at you, AMG) either, whatever the hell that means. This is a band responsible for three unbelievably visceral rock albums, each of which can be argued for Greatest Rock Record Of All Time status, the last having been released 34 years ago. They’re credited with inventing punk rock; the Stooges have absolutely nothing left to prove. Are rock and roll historians really going to give a shit that this comeback record is generally lame?

It would have been a pleasant surprise if The Weirdness ended up resembling, say, ONoffON (2004), but anyone who’s listened to more than 20 seconds of any Iggy Pop solo record since 1977 knows this was an impossibility. Instead, Stooges fans get something more along the lines of Jane’s Addiction’s Strays (2003); that is, an album that’s completely unnecessary aside from an outlet to keep the band from feeling guilty about touring without any new material. And like the Jane’s record, while The Weirdness doesn’t begin to approach the quality of its source material, it rocks just hard enough to keep from being a complete embarrassment, containing two or three respectable tracks for the diehards alongside a bevy of uninspired ones.

In fact, if Iggy Pop had the sense of mind to credit The Weirdness to himself alone as opposed to using The Stooges moniker, I’d probably have raised the score by a few points. This is because it really does best anything Iggy’s released in the last 15 years, although this is more of a commentary on the sheer awfulness of his solo records than anything else. Of course, it’s not for nothing that his backing band consists of the same dudes responsible for Fun House (1970). Ron Asheton under-utilizes the wah pedal relative to his band’s salad days, but it’s still completely brutal when audible, and brother Scott benefits from the cavernous drum sound that naturally flows from Steve Albini behind the boards. The ever-dependable Mike Watt fills in on mostly inaudible bass duties, and Albini keeps it sounding raw. Sonically, there’s really little to complain about.

But the songs themselves aren’t so much unlistenable as just a little sad, highlighting the fact that Iggy Pop is less-than-scary nowadays, and his voice is shot to hell. As for lyrics, well, he seems to have forgotten that part of the strength of The Stooges (1969) and Fun House (1970) lay in their lyrical economy, with Pop’s blood-curdling screams and Ron Asheton’s solos speaking far louder than actual words, of which there were relatively few. In contrast, there’s literally more phrases in The Weirdness’s first two songs than on all of The Stooges first two albums, the majority of the stanzas now dealing with Iggy’s wealth, considerable sexual prowess, and girls of all kinds, notably African-American ones (“can’t resist!”) and harpies who take his money (“and immediately bank it”). Really, I’m as impressed as anyone that Iggy’s penis is still capable of “turning into a tree” at age 59 considering all the drugs he did in the 70s, and yours truly feels a little sheepish complaining about questionable lyrics after having professed his love for the last Chili Peppers record. But listening to these inane lyrics, shouted completely out-of-tune over faceless metal riffing, actually brings the Wesley Willis Fiasco to mind, which I have to assume wasn’t the plan (although Wes was the world’s biggest Albini fan when he was alive).

It’s not a total loss. The requisite misogyny of “She Took My Money” is fun because Iggy Pop sounds like Axl Rose when he rants about a woman who gives him the “pussy-whipped dizeeze!” and converts his money into a “diamond mine,” while Ron Asheton finally rips shit up on the wah pedal. “Trollin” is an appealingly primal stomp, and album-enders “Passing Cloud” and “I’m Fried” both feature surprising levels of chaos (and Steve Mackay saxophone) that would have been welcome on the rest of the album. But it speaks volumes that the latter song -- and I can’t even begin to make this up -- name checks the “Sunday Styles” section of the New York Times. Apparently Iggy is too fried to read it. Damn.