Other Records by The Thermals

The Thermals: The Body, The Blood, The Machine 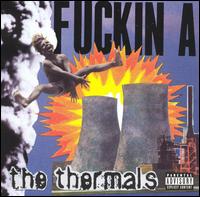 Portland rockers the Thermal stand out as a lo-fi beacon of light in over-produced, uber-serious times. Whilst most rock has forgotten how to be fun, the Thermals remember the lessons of Robert Pollard and Lou Barlow and Kim Deal. On Fuckin A the “fi” is slightly higher while still retaining the feel of their debut; the crisper edge to their songs is appreciated. The attitude this time out is mildly political, but really the fuckin’ A stuff is just as much an excuse to rock out as it is to be conscientiously angry. And while there’s nothing here to rival the blisteringly beautiful pseudo-political scene critique that was “No Culture Icons” from More Parts Per Million (2003) – sing it!: “Hardly art, hardly starvin’/Hardly art, hardly garbage!” – sorry, where was I? Oh yes, while there’s nothing that approaches the pure rockery of that instant classic, the sophomore effort of the Thermals does not disappoint and features simple, catchy lo-fi beauty and clever, earnest lyrics from lead singer Hutch Harris.

Hutch fills these songs with more political content than usual. “God and Country” begins “Pray for a new state, pray for assassination.” The bouncy un-menacing pop continues on songs like “End to Begin” yet seems slightly at odds with its kinda-sorta protest attitude. Hutch seems more comfortable when bleeting out his idealistic and romantic verse in an earnest semi-sneer. Luckily, that’s the case for most of the album. Opener “Our Trip” rocks out in pure and simple terms and presents a call of arms “say what you mean” or “we’re not listening, we’re not listening.” While it’s a simple and almost juvenile plea, coming from Hutch and the Thermals, it doesn’t seem all that annoying, mostly because you’re too busy nodding your head to the beat to really argue with overly romantic sentiment. “Every Stitch”, while fun, is also an example of how the lyrics have suffered a tad this time out. “I’m through talking/ today was fine/ So don’t remind me/ I’m through thinking/ today was fine/ so don’t remind me” just doesn’t hold up to witty classics like “Its Trivia” and “Brace and Break.” But songs like “How We Know” find the Thermals back in top form. And while the lyrics all around don’t feel as sharp, it doesn’t hurt the overall energetic, fun feel the band has cultivated.

In the end, the Thermals are a simple pleasure. Fuckin A is an album that speeds by in a gleeful melodic rush of energy and wit, but it isn’t exactly high on substance. Let’s just say if your mom caught you eating this album for dinner, she’d scold you for not having something more filling and healthy. But when your mom left the room, you’d go right back to stuffing this album in your face. It’s that kind of album.