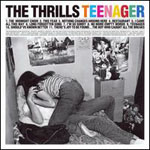 Forget girls and drugs -- rock music's real topic of choice has always been youth. Or, at least, remembering it. The Thrills' Teenager -- the Irish band's third album, and by far their most accomplished -- certainly devotes a sizeable chunk of its 40-minute run time to the pursuit of women, but the songs are less about pubescent love than mere nostalgia. While the band has made a career out of sounding like grumpy old men (from 2003's So Much for the City: "Let's go to San Diego / 'Cause that's where all the kids go"), they've shed the accompanying irony. Teenager is a mature look back, one that draws equally on nostalgic anthems ("Born to Run" and, uh, "Summer of '69") and the band's original California-pop template.

If Teenager finds the group sounding like adults, it's after the growing pains of the first two albums: So Much for the City, with its loose songwriting and post-Pet Sounds (1966) Beach Boys instrumentation, spent a little too much time soaking up the California sun, while Let's Bottle Bohemia (2004) sacrificed much of its predecessor's Surfin' USA charm in favor of darker, slicker rock songs. It was Bohemia which found the band abandoning the beaches of San Diego and Santa Cruz for a cynical look at celebrity-obsessed big city (read: Los Angeles) nightlife; a tad snide, to be sure, but the angst rang true. Teenager is a more personal album, and even if it doesn't recall any Irish landmarks the references to small towns and factory jobs don't exactly evoke the American West Coast.

Unlike the last album, things here are more bittersweet than bitter. The songs range from sad and nostalgic (the shamelessly moping title track) to optimistic ("This Year Could be Our Year"), sequenced in a thematic arc that takes us from the naivety of the past to an older, wiser look forward. It's not a concept album, exactly, but from lyrics to music, it's certainly meant to be heard as a piece of work. While storytelling hasn't always been the band's forte (Bohemia's "Saturday Night" should be required listening in Repetitious Pop Songs 101), they embrace it here. "I saw your sister last night / And we danced, danced, danced / But that was all," Conor Deasy sings in "Nothing Changes Round Here," fleshing out the aftermath of a one-time sexual encounter that ends in heartbreak for our hero: "Then you disappeared from our lives.I demanded an explanation / You said I was not your father / And you owed me none." So abandoned, he's left to his own unhappy devices, a theme that arises again in songs like "Restaurant": "This'll never be what I want, in some fancy restaurant like now / This'll never be what I want / And all I ever wanted was" -- cue a too-sweet-for-words harmony -- "you." It's a far cry from the escapism of the first album (anti-escapism, even) but in its portrayal of an aging, heartbreak-ridden everyman, it's much more satisfying.

The acoustic guitars and Byrds-y affectations of the first album have returned, but this time they're tempered by the sharper songwriting sensibilities the band developed on Bohemia. The group's always had a way with a great hook: tracks such as "No More Empty Words" should lodge themselves in your brain for weeks on end. Deasy's breathy whine, which somehow manages to make him sound both world-weary and prepubescent, has never sounded better. Most of the songs are brisk, chiming pop gems, with the album only really slowing down for the title track's desolate balladry. Smartly, the album's three best songs -- "This Year," "Nothing Changes Round Here" and the mandolin-bolstered "Restaurant" -- fall in a glorious early-album run that leaves more than enough momentum for the rest of the disc. The album's finest moment comes in opener "The Midnight Choir," when Deasy sings "If something should come between us." and an electric guitar sears through the song like a hot knife.

All in all, Teenager stands as both a distillation of the band's strengths and an impressive step forward, and perhaps more importantly, an irony-free, immensely relatable look at the heady emotional extremes of youth. While longtime fans may be surprised by the album's seriousness, one can't bum around Southern California listening to Brian Wilson forever. The Thrills have grown up, and they're all the better for it.