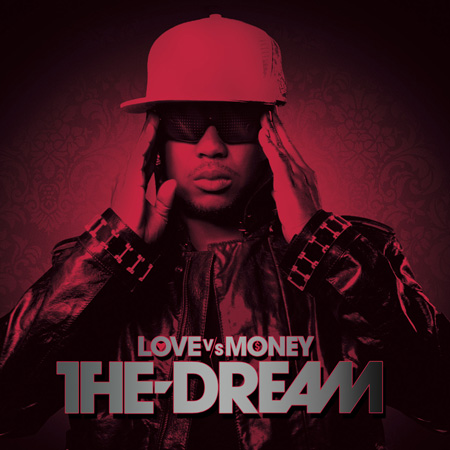 The best song on this record’s the one where The-Dream realizes he’s a dick. On Love vs. Money Dream replaces the “Hate” in his unfussy Love/Hate (2007) dichotomy with something a little more morally ambiguous, something that hits closer to home. And by “closer to home” I mean smack dab in middle of The-Dream himself, bullseye, superfluous hyphen shattered into pretty little dollar signs. Context is everything: so, for almost this entire album Dream treats women as little more than cute receptacles for his penis. “Put It Down” is abhorrent, Dream making innuendo a dirty one-way street, not to mention allowing drums that sound like Ciara’s “Promise.” Mariah Carey gets marginally more respect on “My Love,” since she, like, gets to have a voice. But there’s something awfully reductive about the song and then you realize that it’s because it’s reductive of Mariah Carey herself, like The-Dream made the most buttery, feathery lightweight track he could muster and said, “Hey, Mariah, I have a Mariah Carey track for you to be Mariah Carey on.” Which ends up kind of objectifying women all over again, even if Carey in some small way deserves the grief. But after commanding girls to rock that “shit” (or, with the edit that actually makes the meaning worse, “thing”), after imploring girls to “whip it, whip it, slip it, slip it” on “Sweat It Out,” and after walkin’ on the moon with Kanye (which has to be bad, right?), The-Dream takes a break from thinking with his dick and points that dick right back at himself. And it’s a remorseful pointing of the dick, to be sure.

Not the first single (“Rockin’ That Shit”) or the second (“My Love”) but hopefully the third, the title track of Love vs. Money is the sole moment where The-Dream’s artistry is actualized through, how else, an epiphany of self-loathing and regret. This is where The-Dream joins me in shaking our heads at The-Dream. Here we stand side by side, remarking to each other how sad is this chub who thought he could build a lasting, meaningful relationship on nothing but paper. It doesn’t hurt that “Love vs. Money” is a tense coil of synths wound behind staggered percussion firing off rounds right into The-Dream’s breast. Doesn’t hurt me, hurts The-Dream, which is why it’s so great. Also great is how desperate Dream sounds as he admits that the other guy got it right, as he confesses that instead of loving his girl Dream was just “making it rain,” as he realizes that “money couldn’t match love” then a chorus of Dreams cry “IT AIN’T NO MATCH FOR THAT” and he does his wordless chorus thing but makes it speak a volume of pathos and musical catharsis beyond the fake orgasms of “Falsetto.” I think “Love vs. Money Part 2” probably softens the blows The-Dream deals against himself in Part 1 but I don’t really know because I choose to ignore it. And most of the rest of this album, really. Dude’s a dick.

Is my mild approval of Love vs. Money, then, really founded upon little more than one song? Well, it’s a mixture of things for which I respect The-Dream, all of which come with their own built-in qualifiers: it’s his ear for what’s “current” in pop production even as much of his backing sounds like little more than glossy soft rehashes of Toomp, Polow, Timbo (if that’s not Timbo saying “digdigidoo” in place of real percussion on “Right Side of My Brain,” it should be), and heartbroken Yeezy; it’s his knack for vocal hooks even if he’s usually just using those hooks to fuck something inane into our brains by repetition; it’s his endearing affinity for some kind of conceptual conceit that gives us the title track talking about how all The-Dream wanted to do was take girl home to his mama right after “Take You Home 2 My Mama,” even as that example illustrates how half-assed the whole concept is in practice; it’s his flair for bringing some creative, dynamic structuring into modern R&B even though nothing here is as balls-out audacious as “Shawty is a 10” or as subtly surprising as the high hat ticks appearing nearly halfway into “I Luv Your Girl”; it’s all of these things together in tracks like “Rockin’ That Shit” and “Mr. Yeah.” But it’s on that title track alone that we get a glimpse of the artist The-Dream could be, one who’s not flippantly regressive in his treatment of women or spooging lyrics that trade in soul for sex—an artist who figures out that some dicks, and especially his particular dick, can write poetry only when they’re broken.