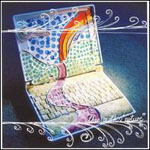 It's a bitch to review an album like Nature. Laptoppers, they're difficult, what with their rigorous economy of sounds, their atypical compositions, their refusal of pop generalizations, etc. Avant-gardists, making music out of dissonance or conceptual thematics, they're a challenge. But Thee Moths are an unequivocal bitch to review.

These characters decided, it seems, to have a little pow-wow in which such conceivable sentiments may have been exchanged: "What if we go Microphones-style, but more, you know, abstract?" Or, "What if we took the 'pop' out of glitch pop?" Or "What if we make an album that fucks with people? You know, one of those albums where during a track like 'Untitled,' the poor listener stops to make sure the CD isn't scratched, becaues it's skipping, but actually, the skipping is part of the actual CD recording!" Sounds like a bunch of real ass-hats, right? The kind who probably find a great deal of humor in having one song title "You Fucking Little Shits" and another "You Shitting Little Fucks" on the same album, ha!

Nine times out of ten, yes. Seriously, in principle, I hate the guts out of artists like that. "Dying" should bounce along on its strummed chords and I-enjoy-nature-and-drugs vocals, but goddammit, they actually intentionally fuck it up so that the bit stutters and falls out, then back in, and then teases you into thinking, "haha, the joke is done." Except then it's not. But right as you're about to exact verbal and perhaps physical vengeance on this piece of unarguable turd, it dovetails right into "You are a Great Wave," which is pretty much the definition of catharsis - a (no wonder!) wave of glorious feedback noise engulfing a feeble background drum beat in layered throes, and then dissipating into a textbook case of Microphones (post-It Was Hot...) weird-pop acoustic guitar-based melody. The unarguable turd metamorphoses into an inexplicably ingenious and beautiful cocoon, out of which its following track so gorgeously blooms.

Nature becomes, after relived and similar experiences of the album, an oddly profound stream of musical collage that punctuates apparent offal with awfully tender and rending moments. Indeed, the titular theme of nature is an impressively developed one; preset compositions, fixed sequences, fluid recordings, are given the shaft in favor of a recording in which errors, skips, fractures, and downright abrupt mood shifts play and frolick. The naturalism of its found sounds, its self-defying anti-order, is intellectually interesting and sonically defamiliarizing. "Hey (excerpt)" doesn't mind detuning its guitar in the midst of an idyllic melody and then falling apart into broken-up beats. Somehow, the synthetic ethereal warbling, elongated vocal and harmonic swoons, and tinny drumming of "P-annne-oh" offsets the ritualistic chant of the words, a-hem, "the universe / would suck your dick to make you come." Yeah, I cleared my throat and raised an eyebrow, too.

So Nature is a bitch to review because despite its substantial merits and moments of loveliness, I don't know who on earth I'd recommend it to. Probably Phil Elverum devotees would get the first tip, followed by misguided lovers of The Kallikak Family. But even then, the reasons for recommendation have more to do with the fact that these people actually enjoy obscurity and avant-gardism for its own sake (cheeks turning red, I must at least occasionally count myself among the crowd). How do you recommend an album on the caveat that it takes time to "figure out," and not much else? How do you know that the puzzle pieces are supposed to fit together at all?

You don't. You slap it with a rating that at least obliquely indicates the sublime enjoyment to be found in the skeletal melody (backgrounded by, cleverly, seagull squawks) of "Land Ho!" Yet you keep it low enough to make clear that those sublime moments are at best intermittent in an experimental patchwork that generally appears to have not a clue about what melody is - the paradox, of course: the melodic moments are all the more striking for their sudden emergence and tenderness. Finally, you say, "you know what, I don't know how else to describe this stuff, but by gum it will wallop you when you least expect it, and make a kind of organic sense." What do I mean by organic sense?

How's this for the cop out: listen to the highly compelling Nature and see if you can tell. Hey, at least I didn't use the phrase "sonic journey," somewhere in there.