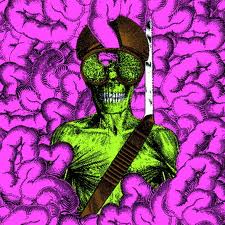 As of this moment, there are two Oh Sees in my head. With as many solid records under the Bay Area band’s belt this year, two records rather distinct in character, a case study in multiple personality disorder is perhaps the best method of exacting the nature of their group identity. That character (or caricature, in founder and bandleader John Dwyer’s lovably distorted vision) has always been a bit shifty, particularly in their formative years spent transforming from the friendliest of Dwyer’s myriad solo projects into a fearsome company of pyromaniac garage rock torchbearers with a nigh-on-legendary penchant for electrifying performances. But still, the band’s output up to this point hasn’t inspired any deep need to draw territorial lines between the masks Thee Oh Sees have been known to don; always glowing like a radioactive skull from beneath is Dwyer’s sense of macabre garage skronk. What we’ve got with the good ole-fashioned rock ‘n’ roll destruction that characterizes Carrion Crawler/The Dream, on the other hand, is a pure experiment in exacting precisely what it is that a band dynamic brings to Dwyer’s songs.

The first half of 2011 saw the release of the ebullient Castlemania, a fluffed-up but unhinged collection of cracked pop deconstructions. It was Dwyer returning to his solo roots, recording almost all of the material himself minus a few additions by lurking crew members. Castlemania felt like Dwyer’s fantasy kitchen sink record, a little bit of everything he’d been previously lauded for pushed against the speakers like neon paint in a plastic bag, overstuffed with surprisingly poppy arrangements. He proved he still had plenty of outlandish hats to show off when spelunking through what must be the most terrifying toy chest on Earth. It kept pace with the absolute best of the band’s library: Dwyer rolled out some of his most engaging songs mining an anything-goes instrumental sensibility that played almost decidedly against the typical form of his ensemble incarnation.

Was Castlemania a statement of new intent, or just another day at the office that found Dwyer casually cooking the books all by his lonesome? Dwyer seems almost to be making a point of demonstrating the unique aspects of both the band’s modes, and even made it clear in the immediate wake of Castlemania that he and the crew had already made solid plans for a full-band recording later in the year. So here’s where Carrion Crawler/The Dream, Thee Oh Sees’ eighth LP in five years, steps in. Here’s where it clears the air and reminds me that when in Dwyer’s realm, it pays to do as Dwyer does: by not taking things too seriously.

Within the predictable bounds of Thee Oh Sees’ style over the years, Carrion Crawler couldn’t be more distinct from its predecessor. Where Castlemania soundtracked Dwyer cleaning out the garage to fuel a tripped-out Saturday morning adventure, Carrion Crawler is almost entirely stripped of sounds and dynamics that could be considered extraneous or personally experimental, the ramshackle stomp of old taking center stage and paring down to an aerodynamic state simply through the friction of constant acceleration. The band’s deserved confidence in plumbing typical garage ground has always been sidled by a playfulness, even wackiness, but Carrion Crawler is invested wholly in the business of bombast. These songs win out not through their charming surprises, but through an uncompromising gracility which allows them to propel their unified weight in a sort of hitherto unrivaled ferocity.

Honestly, Carrion Crawler is one of those rock records that almost doesn’t need song titles, each cut serving the same central purpose and character with such a hypnotized dedication so as to make overt experimentation simply a distraction from an avalanche of good fun. It may be the kind of sum-of-the-parts affair one loves to get buried under, and not the kind to go picking through lest one runs the risk of isolating something that seems insignificant when compared to the album in full. Carrion Crawler/The Dream is ultimately a strong addition to an accomplished catalog, plus Thee Oh Sees’ most stylistically focused recording yet.

There’s a particular ingredient in the record’s rollicking second track, “Contraption/Soul Desert,” that I just knew mirrored a similar moment in some distantly related song…which after some hours of wracking I realized was the same vacuum cleaner dissonance employed in the Raveonettes’ “Attack of the Ghost Riders.” The funny thing, and the best example of how Dwyer makes particularly idiosyncratic use of cliché, is that where the Raveonettes’ Sune Rose Wagner employs harsh chords to inject a sense of dirt and danger to his hermetic, high-gloss take on the garage sound, Dwyer uses an almost identical sound to offer melodic relief from the sandblasting dust cloud of his song’s demolition derby. They say that one man’s trash is another man’s treasure.

In the end, I’m embarrassed for assuming that Dwyer was making silent plans to go it alone again; the West Coast garage rock sound for which Thee Oh Sees have become the poster children is one that was borne of the nascent era in which rock and roll ensembles were standardizing themselves into a knowable form, and Dwyer of all people must know what strength that context lends his songs. What’s probably most valuable, though, in Dwyer simply sticking to one facet of his prowess, is that it leaves plenty for new listeners to discover in Thee Oh Sees’ unique, genre-definitive-and-beyond library. My immediate advice is to grab a skeleton mask and a blood poncho, take Carrion Crawler/The Dream as a well-crafted doorway into Thee Oh Sees’ lovely DIY funhouse, and leave your rock ‘n’ roll expectations at the giant lips-shaped entrance.