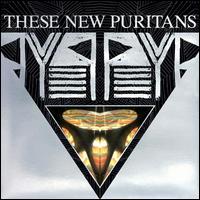 The UK’s latest band to play their guitars one string at a time and spit their punctuation with a conviction seemingly impossible on North American shores are Southend’s These New Puritans, whose influences we’re only a magazine interview away from knowing. A few listens and a quick Google search showcase a band that willingly reveal their music is as much about us knowing that they like to read books and listen to albums than what those books and albums are about or why they’re important.

Here’s a quandary: does one hold a derivative artist responsible for the deficiencies in their formula though it predates their existence by decades, or reward them considering their keenness for and literacy in said formula? A lot of what’s unlikable about These New Puritans has more to do with the chicken-or-the-egg relationship that exists between the UK press and the bands they inflate. Knowing that, are a quartet of teenagers really to blame for littering their debut with the kind of stupid profundity the press over there so eagerly reward? Opener “Numerology (aka Numbers)” says “Number one is the individual / Number two duality,” and “what’s your favorite number? / What does it mean?” and finally “every number has a meaning.” The inanity of these undergraduate insights doesn’t diminish the anthemic manner in which the chorus is then constructed, repeating simply “numbers” with the staggering proficiency of a robotic, automatic slickness. I felt like I was betraying my brain even as I found myself getting pumped.

Last week I reviewed Born Ruffians’ Red, Yellow & Blue, on which three teenagers intentionally limit their scope via stylized spazz to good times and horniness to put out a very fun album with no lasting power. If the UK’s discourse of hype is the quandary, then this is the crux: These New Puritans are Born Ruffians’ inverse; they try to extend their scope via stylized grandiosity to render what can’t help but be a stunted worldview in the hopes of achieving permanence. Where the Ruffians posit Pixie-lite playfulness, the Puritans ape Gang of Four (or Bloc Party aping Gang of Four) to give us philosophy chic the way Bloc Party give us fresh-tasting Diet Politics.

So, the Puritans have the same problem as the Ruffians, but are looking at it from the other side of the glass. They rarely achieve the balance that comes with age, the realization that life is equal parts humor and seriousness, absurdity and meaning, ugly and beauteous. In the end, the two bands could learn more from each other than they ever could from listening to their own internal songwriting conscience (or from a blowhard of a critic for that matter). Where These New Puritans could use a touch of the Ruffians’ “Badonkadonky” to lighten the mood, the Ruffians could probably use a little of the self-importance that informs the lyric “I’ve always liked the idea of synchronicity”—a line that no self-respecting nineteen year old could deliver without being met with rolling eyes or a withering stare.

Ultimately, though, I’m criticizing the forest while ignorant of the trees. Aesthetically, repetition and tight-lipped arrangements are contrasted with expansive choruses— a trick that, in rock music, is about as old as it comes, and will ensure that the Puritans find a foothold. The band’s performance is either accomplished or the production masks whatever shortcomings might have manifested behind studio walls. These New Puritans are as palatable as any band churning out tight, over-produced post-punk, and most of the issues to be identified can be directed at the wave of hype or the adeptness and willingness with which the band rides it. And these things are more the product of an untainted enthusiasm that will, sooner or later, find itself tempered.

Take the nonsensically titled, repetitive but infectious “C. 16th ±,” which says something about “the 16th Century” and “we were right.” What, if anything, Jack Barnett is blabbering on about is completely subsequent to the conviction with which it’s delivered, which doesn’t suggests that These New Puritans are entirely as pedantic and condescending to their audience as one suspects when reading their Mojo interview, in which Barnett actually has the gall to suggest that, at nineteen, These New Puritans are “the moral side of music.” Hate the game, not the player, they say, and Barnett seems like he’s rolling the dice, trying to make some change. His “morality” is, of course, not backed up by the vague, cyclical themes that are “explored” in their gimmicky “Numerology (aka Numbers)”, “Infinity Ytinifni” and opener / closer “…Ce I Will This Twice” and “I Will Say This Twi…” (Though the terms “opener” and “closer” imply linearity and, as Barnett insists on “Colours,” “infinity’s not as fast as me.” Right.)

Okay, but harping on teenagers for having their head up their own ass is about as original as their heads being up there in the first place, so I’ll suppose that the band’s house of cards can be about as effectively supported as any radio-ready stab at music-_cum_-ethics. Suggesting that moral music should be more challenging for both musician to play and listener to understand is surely as much a given as that These New Puritans are more interested in referencing intellectualism in an attempt to skim something off the top for themselves than living it. By leveling criticism in that direction, I’m riding the same wave of hype. I’m just enjoying it less. Should I point out instead that “Elvis” is still fun to listen to? Is that because it’s one of the easiest during which to block out the theoretical wagging finger as well as its smart, tight production and chorus? “Costume” is concise and suitably anthemic, and “£4” and “Navigate-Colours” bark repeatedly in a way that’s sure to please those who enjoy having the vocabulary of the everyday transformed into sloganeering.

As I’m typing this I’m on yet another Neko Case bender, catalyzed by some recent mail I received from a reader who, having read my disdain for Destroyer’s lyrics, asked me to recommend someone whose lyrics I enjoy. And what I hear in Case’s (admittedly vastly different) music is a substance that can’t be easily duplicated, no matter the overcompensation, though These New Puritans certainly do try. Case doesn’t need to scale panoramic to affect broad themes the way These New Puritans do. They are a talented, enthusiastic and timely band; I feared that it’s ageist of me to suggest that their debut album isn’t great because they’re too young. But now, as Case’s pure-hearted, raw, poignant “Things That Scare Me” echoes with spectral resonance, I know that there are leagues between these kids and truly great songwriters. If their youth is the only problem, then count them luckier musicians than most.