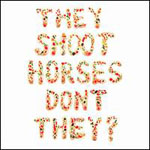 They Shoot Horses Don't They?

It has often been my observation that the best bands tend to have the potential to be really fucking annoying. Jeff Mangum’s voice can drill a hole through your temple, Thom Yorke does that whole head-wobble thing, and the Beatles dabbled in the occasional John-Cleese-in-drag falsetto, and yet we love them because every irritant that clouds our minds leaves a stain of greatness.

All of which makes it sound like I am about to bestow some exceptionally green laurels upon the categorically annoying brows of They Shoot Horses Don’t They. Unfortunately, that itch that is the full-on vocal assault, horn section, and incessant lilting oompah-oompah-clank-clank-clank plants beneath your skin is titillating only about half of the time, an exciting prickle that, if not properly treated, can burst into a dangerous mixture of ardour and fury. That said, to annoy someone to a state of pleasurable inflammation even part of the time is something of an achievement, and so I send a psychic kudos to the band even as my iPod finger twirls, seeking out the balm that will dull the clang of brass, unknot my jaw muscles. Sigur Ros? No, too many drums. Brian Eno, Ambient 1 / Music for Airports. Perfect.

On Pick Up Sticks, They Shoot Horses are exciting and energetic, the very sort of thing you’d hope to hear if you wandered into some smoky moonshining cabaret nestled in the heartland of prohibition. Unfortunately for the band, we are living in a post-prohibition age, and their sleazy horns and reckless musical abandon, while briefly thrilling, needs to temper itself to the current climate -- a climate that is, frankly, a little bored with drinking and desire. I mean, goddammit, it’s minus twenty, and I want something measured and warm, not this incessant clatter chinking away at my sanity. I’m not asking for Enya here. Just a few empathetic pats on the shoulder would be nice.

“Pick Up Sticks” doesn’t offer much in the way of downtime (though the sparser texture in “What Is That” does loosen its belt enough for a few deep breaths), but there are still lots of successful moments. “One Last Final Push,” the album’s opener, shows the band at its full potential, lurching erratically but purposefully through an arrangement that chases the album’s most likeable melodies around a klezmer aesthetic. If the entire album was this tuneful, its relentlessness might be more manageable. “The Hallway” and “What Is That” see vocalist Nut Brown briefly abandoning uniform wailing for falsetto whimpers. “The Hallway” also dabbles in time signature changes and tempo fluctuations, cutting any possible monotony short, and its digressions into formlessness are welcome distractions.

Unfortunately, much of the rest of the album recedes into the background by virtue, ironically, of its noisiness. And perhaps my criticism seems to be aimed not at a band, but a genre. Would it even be possible for a black metal band to earn my approval? Maybe not. But I don’t believe that They Shoot Horses are aiming to be one of those bands whose noise and esotericism leave most of us outside. This isn’t the Freemasons. It may be conceit, but I think this album is aimed at people like me, whose tastes fall somewhere between convention and tentative experiment. We don’t care if you can’t really sing or play your guitar, but we expect accountability. If you’re considerate of our need for ebb and flow, we’ll let you get away with more. To earn our love, rather than merely our respect, these horses need to know when to rein it in.