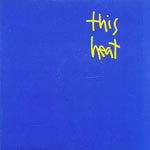 I can’t tell you how many times I’ve been let down by supposedly “essential” albums. It’s not necessarily that these albums aren’t good, but that in so many cases the classics feel stale because bands of all shapes and sizes cut their teeth lifting ideas from said classics. Now, of course, we know this going into most listens to classics, but it’s hard not to feel disappointed, confused as to where the greatness lies and a little ripped off if one actually bought the supposed classic.

That This Heat manages to avoid that icky stale feeling is probably partly because the album has been damn near impossible to find for years now. The British group’s self-titled debut has wandered in and out of print for almost all of its 28-year existence and has been impossible to find for all of my ten years of active CD searching. Why, it’s enough to send one on a semi-legal downloading expedition! But sadly, even that would often leave one with a shitty 128kbps rip and an incomplete tracklist. In short, if any band’s discography was ripe for the ole remaster/reissue exacta, This Heat had to be at the top of that ever-shrinking list. (And, yay, the band’s entire discography is looking at a healthy reissue this year along with a bunch of rarities and previously completely unavailable material.)

While it’s definitely left an indelible mark for some, because of its scarce nature, the album hardly seems ubiquitous. It’s often said that not many people heard the Velvet Underground in their early days, but everyone who did ran out and started a band. While it might be a stretch to say the same of This Heat, it’s certainly safe to say they kick-started a few genres.

Which leads to the main reason that This Heat avoids sounding stale – the band was at least 15 years ahead of its time. The band was post-punk and post-rock years before anyone realized punk had expired or rock had anywhere left to go, setting an early blueprint for Slint (and for the record, a far more enjoyable listen than Slint). At the same time the band took advantage of looping and other production effects I can’t even pretend to understand that predicted future electronic king Aphex Twin and many other bands that would make their mark on the production side of the mixing board. But, importantly, despite its experimental compositional and studio practices, This Heat did not eschew the pop narcotic and remains one of the more listenable and addictive avant listens you can find. Featuring loops, fractured noise, stinging guitar and pulsating rhythms, This Heat create wonderful and frightening industrial/glitch/whatever songs that somehow flit on the outskirts of a slew of genres without wholly embracing any of them.

Formed in South London during the onset of the punk revolution, the band took a decidedly more eclectic approach than many of their punk-leaning neighbors. Influenced heavily by Can, but also avant jazz, dub and pretty much everything else under the sun, This Heat’s only contemporaries as far as being able to reel in their weirdness in a remotely pop-based manner were Wire and the Fall (and possibly the production work of Martin Hannett). The scorching guitar riff on “Horizontal Hold” sounds like something you might hear on Pink Flag or Chairs Missing, however, the lilting drum loops and undulating bass lines do not. The stuttering dirge of “Not Waving” sounds for all the world like music the Fall would make a few years on, at least until the 2:55 mark where Charles Hayward makes a rare vocal appearance and starts singing like Thom Yorke and an organ comes in and it suddenly morphs into an outtake from Kid A.

“Twilight Furniture” is the album’s centerpiece, an excellent building guitar composition that coils, flexes and explodes, backed by incredible, icy tribal drumming. The drum sound throughout features this icy, echo-y feel that owes to the band’s meat-freezer studio. “24 Track Loop” is a nice tempo-change from the dissonant guitar, as the live organ and drums played on the track are warped into a groovy, acid electronica. It’s a track that owes as much to the innovations on production techniques as the music played. I’m guessing the first time Richard D. James heard this song he nodded and said, “exactly.” Elsewhere, “Music Like Escaping Gas” clearly informs the direction the Liars have taken on Drum’s Not Dead. Though as promising as that Liars album sounds, if they ever listened to the jaw-droppingly excellent drone/guitar epic “The Fall of Saigon,” they might run and hide. The song starts simply enough, as a sort of slow sing-a-long about an ambassador’s wife in Saigon before some bone-chilling drumming joined by a jangling guitar which quickly builds to a blistering, knifing coda.

As fun as it is to play the spot-that-influence with this record, it is a truly odd and rewarding listen on its own merits. The percussion loops are bewildering, drop in and out in unexpected places and are insanely catchy. The jagged, angular guitar is both inventive and addictive. “Twilight Furniture” may have influenced a hundred post-rock bands, but it’s still a great song. Bands may have tried to cop from it, but This Heat make a pretty strong argument for themselves that no one else has ever gotten their unique mix of utterly weird avant plus pop hooks quite as right. For my money, that’s what separates This Heat from bands like Can or Faust. While those two are undeniably superb and have moments of utter brilliance, something about listening to them feels like homework. This Heat, while clearly in debt to those bands and featuring the same ethic of reckless inventiveness, straddle a fine line between a slew of avant influences and a desire to make great songs. For that reason, almost thirty years later, This Heat still sounds like an essential album should: alive, inventive and impressive. So, yeah, OMG! = 5 stars, mind-blowing, utterly must-have, etc, etc.