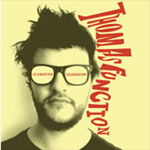 There’s a track on this new Thomas Function album called “Relentless Machines” that’s pretty rocking. I mean, it’s bratty and anthemic and has these big and sinuous guitar lines that jive-step then accelerate and generally I really like how this thing’s been put together. It’s a hit. When I hear writing like this it makes me smile.

Still, one of the functions of Celebration is to prove that people in general don’t exist. Which is pretty cool because, I mean, do they? Think about it. Slipknot already touched on this territory with 2001’s Iowa and recently others too—politicians and nostalgists—seem to be thinking and pining for times when things and concepts seemed a lot less complex and a lot more real. When you factor in how things might not be real anyway, it’s not difficult to see why the whole world is going nuts.

I don’t like to think about these riddles too much; impersonally speaking, the people in this city like to play games and scoot. Many of them smell bad. Personally speaking, though, I have found them—and let’s put aside science’s slick formulae for a moment—to be tangible and real and rough to the touch. You can’t say these people “don’t exist”: they do (exist)! Still, I wouldn’t shake a shaggy umbrella at the idea that they, like, sometimes don’t. Good art, in my opinion, is what happens when you do but you don’t: when the guitars are like recorded but unremitting. In the moment you press play nothing is actually happening! Real-time music is musical bad-style: Weezer will not be recording a live album in the transitory era. True art is for keeps. It is forever (cf. Wu-Tang Clan).

And when you don’t want to do “forever”? Well, I mean, I just try to chill, y’know? There is no clear-cut continent for the Rivdawg to latch his airspace: and even the sea (the Atlantic), where it is bright and beautiful and frequently blue (because the water reflects the sky) gets a bit too hydraulic sometimes. I like to think “I don’t belong” and when I don’t think I like to jam—on dry land and very often now with female creatures and musicians of other stripes and inclinations. It’s got me listening to a lot of new stuff. Jungle music, for instance, which I’d for-sure recommend and would briefly categorise as a music fusion, loud—but rhythmic—and mostly set in and around pitch-black fields and dance tents. Of its many parts, about four-fifths involve the use of drums but all of it is generally heavy. But not in the way that Danzig, for example, is heavy. It also has that African vibe I know you guys like (Vampire Weekend) and a good beat if you’re loose and unparticular.

One other band I’d also like to key you in on today is this Thomas Function. Celebration, if you read back, proves generally that people do not exist. It is also “forever”—time-worn and exciting in the sense that these guys don’t just write “songs”: they sound practised, like a real unit. But also coy like butterflies too.

The indie label Sub Pop recently put out this press-release; when I read it I almost choked on my Cheetos. It said that the new Wolf Parade (?) record might be “this generation’s Marquee Moon,” which, I mean, what. Out of the many bands I’ve heard and been clued in on, Thomas Function actually sounds the most like Television, though. As in Joshua Macero (who sings and plays guitar) does that thing Tom Verlaine did where his syllables are drawled and elongated and there’s pretty much no aesthetic distance between hook and voice. It’s like the vocal hooks are mapping out the ground for the instruments, and the instruments can do nought but follow.

This arrangement is very “chromatic,” come to think of it. And although my own writing is more broadly “Homeric” in outlook (“December,” “Only in Dreams”), it’s not like I don’t write with a mind for this type of singer-song adjunct. What’s really cool, though, is that this band can take that unique creativity and throw it on a whole lotta different genres. There’s straight-up rock (“Can’t Say No”), country blues (“Earthworms”) and even this track you’d swear Bob Dylan would dig (“Peanut Butter and Paranoia Jam”). There’s a lot of versatility here. “Snake in the Grass” even sounds a bit like the Buzzcocks!

In conclusion: it’s not like my own life has been made unique and cumulatively happier through my experience with it but, still, it’s good. Thomas Function is catchy: but their catchiness is more than a garland. It isn’t annoying. As a band they are able to transcend the instant and do it in a way that allows for riffs, tempos and time-elapsed distortion. They prove that “10” is only a number: a concept. A mode to be touched and—infinity be damned—go now and touch it! All of you, in the same way we place our hands on walls and other people. The Matrix put the end-game on what Spinal Tap started: infinity is now a fundamentally decentralized experience. It is possible now to turn the knob to eleven. These guys bring it is what I mean.

This record isn’t as good as Marquee Moon though!