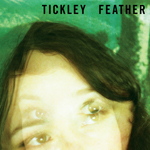 I stumbled across Tickley Feather in one of those gratifying occasions we all sporadically enjoy, one that is expanded from an anecdotal and random occurrence to a narrative and then to a shared myth; an experience that becomes layered with each subsequent listen. Stop me if you’ve heard this one: a band I enjoy and is intrinsically tied to my local scene wants to cover one of Philadelphian artist Annie Sachs’ songs, and so I check her music out. There, completely divorced from the histrionic system of promotions and marketing, entirely ignored by the frantic machinations of next-big-thing thinkers with their market-wide perspectives and undercurrents of encroaching doom and absolute collapse and Fall Out Boy, is the connection these systems spend so much energy and capital trying to identify and exploit. Sachs is an intensely individual artist, sheltered from massive exposure and making music for explicitly personal reasons, but due to factors utterly beyond her control she’s become accessible in a way that is, in my opinion, the best way possible. We all have a variation on this story, something that takes the experience of having been given a commercial artifact and expands it with local meaning, something that speaks to the networking power of this thing we might presume to call a community of music appreciators. I’ll never get to meet Sachs, the brains behind Tickley Feather’s lucid dreaming, but she can’t help but become a part of my physical community now. It’s so grassroots I could just die.

I could be accused of romanticizing what is, at most, a random stumble across an enjoyable album; that accusation would not only be accurate, but also tellingly so. Tickley Feather is the stuff of romanticism, of reconstituted memories, retroactive burnishing and childhood mysticism. To say nothing of the romantic notions to which laptop pastiche also finds itself (not wrongly) subjected. Her closest compatriot, if not in the sense of momentum or even aesthetic but as a band with whom Sachs shares a spiritual core, is the band whose label she calls home. Paw Tracks is Animal Collective’s temporary residence for artists who share an affinity for noncommittal threads of ambient noise, yelps of melody, and the kind of subverted pop that’s quickly becoming or already become one of the new norms.

Tickley Feather most often blurs the line between memory and imagination; here you’ll find in equal parts a lull and an awakening from sleep, experiences that refract vision and demand intense concentration like images drudged forcibly from the mustiest corners of one’s head. Dub is another touchstone, though rhythm here is often drowned so as to leave one spatially disassociated from easier senses of interoperability. The crackly spoken word samples that open the album are perfect because it’s impossible to tell if the speaker is extremely young or extremely old, and the interpolation of age and memory is then splayed open—these words might be viewed with the fearful speculation of a child or the sad retrospection of the elderly, but each is an imaginative supposition; the singsong melodies that follow are similarly treading a line between being haunting and playful, the way a child’s song sung slightly off-key and with sluggish tempo becomes eerily suggestive. “The Python” is infectious, lyrically unintelligible because of the fuzzed-out, lo-fi nature of the recording but soothingly melodic and interweaving background noises with foreground vocals. The effect is that the prescriptive categories of lyrical elucidation are set aside in favor of the occasionally recognizable. Words, like “want,” “dream” and “you” drift temporarily into range, as subliminally suggestive as Rorschach tests.

More tuneful tracks, like “The Python”, “Buttshot,” and the propulsive “Night Chant” will provide the listener with their points of access (never mind that I’m calling “Buttshot” a “point of access”), but I’d argue that it’s “Le Daylight” that is most emblematic of Sachs’ approach. It surrenders itself fully to the hypnotic reassessment of classical forms by disorienting a waltz with sickly effects. To a lesser degree “Keyboards is Drunk” intones something to the effect of “I had a dream” while the keyboards stumble and gripe, stopping and restarting before being cut off mid-chord. More illustrative and important to Sachs’ than anything on the record resembling a single, “Le Daylight” and “Keyboards” are like emotional onomatopoeia set to tape; it might seem too direct to write a song that induces drunk confession by sounding drunk, but under the aegis of this distancing aesthetic and unintelligible words, Sachs opts out of cold-blooded exercise and instead offers us something that comes close, in places, to being purely evocative. “Lookout What’s Next,” the track that should have ended the album, is a minute-long instrumental smoothly effective the way the opening sequence of Twin Peaks folded ominous tidings with subtle beauty, unfeeling mechanization with elegant choreography, sepia tone with sparkle. It lends this fever dream its grace.

Tickley Feather is understandably tiny sounding, private as it seems. But in indie rock, where we privilege the recently uncovered and tend to disassemble the accepted, this intimacy is an amplifier. I’m glad I found out about Sachs the way I did, and I hope this review keeps the trend moving. I’m left, 800 words later, with the conclusion that this is an album better enjoyed through incidental sharing than the harshness of forced clarity.