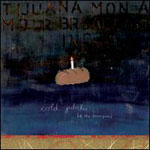 Cold Jubilee (Of the Snowqueen)

For their decision to share with Black Moth Super Rainbow, Kemialliset Ystävät and Broken Social Scene Presents Kevin Drew the title of 2007's Clunkiest Group Name, Tijuana Mon Amour Broadcasting Inc. will hereafter be referred to as "This Band." And there is some small irony that a band with what I'm guessing is a completely idiosyncratic name should make an album with a façade of such unpocked, metallic luster, a long player of robotic, rhythm-based accessibility with appeal as simple as it is ultimately a cycle of diminishing returns.

When it comes to German music I come back again and again to personal faves Couch, and not only for how readily they typify post-rock. Though, to liken This Band to post-rock is far too simplistic to be useful; theirs is so simple a blend of electronic jazz-fusion as to be borderline mall music. One imagines Eno's last ditch effort at full recovery being not so much another testament to interstitial spaces as enlisting a band like This Band to salute our culture's worship of anesthetics, of turning into a "comfort space" the ticking past of one's life while waiting in lines or while looking up at an elevator's floor indicator. But their sharing of too-convenient tags tells us less than the antiseptic rigidity of the music itself. Couch might be all straight lines and unerring, barren corners into which they can perfectly fit their soulless technicality cubes, but This Band shares with them a cobweb-free, near history-less perfection that, maybe coincidentally or maybe for reasons that someone in a Musicology program should write an essay about, seems to be done best by the Germans.

There's an injection of character in the person of keyboardist/guitarist Matthias Petzold, who here provides vocals, but like the rest of the album's accompaniment, he falls comfortably in line behind straight-laced, impeccably produced drums. Sticks, reeds and brushes being switched off make bigger splashes then key shifts meant to be integral to a song's direction. To perform beats that not so much spring as rise mechanically from a deposit of structured, solid-as-fuck rhythms touches on what is best about Couch --predictable elements are arranged in predictable ways but to maximum effect; a fitting credo for Couch and This Band might be that innovation is for those who've given up on perfection and professionalism. Another superficial irony to go with the clunkiness of that name is that the cold-chrome feel of the drums remains the best part of Cold Jubilee (Of the Snowqueen), even after it dares attempt to put a human mask on its perfunctory habituation.

The problem is that where Couch are able to reduce their essence to a singularity of intense heat, a strictly controlled power that is shunted and shifted as an extension of that same expert detail, This Band's reduction is one of bland palatability. It may sound as if I'm foregrounding my preferences, but I think the trick is to play on a listener's over-easy dependence on semi-Freudian dichotomies like "dullness/control is the antithesis of creativity/release," to use the tools of contrast and sequencing to pull back a proficient operation and reveal a pumping, energized heart -- to point out the divide, and then simply cross it. This Band too often tries to straddle that divide and emote for all its exposed circuitry. Petzold displays either a lack of soulfulness or a hesitancy to share it that reduces his presence to another factor in an equation. Behind him a keyboard intones pleasantly, with sounds that will be instantly recognizable, and it's all so harmless and perfectly enjoyable, so comforting that to sit and enjoy it is to experience temporary amnesia; one walks into the mall and then -- next thing you know -- one is sitting in the car with bags, wondering if it happened at all.