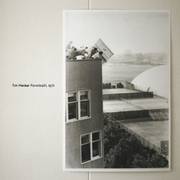 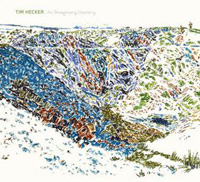 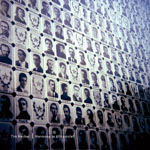 In plainest terms, Montreal’s laptop artist Tim Hecker doesn’t do anything plainly. As it seems, as far as most can muster, his work is steeped in impenetrable context, in thematic consistency that’s ineffably malleable, in times and places that crate anachronism like vital organs. As it seems, Hecker’s an artist on the brink of mastering his genre, but his genre -- a kind of electro-ambient noise experimentation that has come to shirk ambience and is only as noisy as the harmonious tools of an iron landscape -- balks at the accessibility of Harmony In Ultraviolet’s whole. And calling Hecker an orphan is piecemeal, because with the guy’s graceful dialect between context and scope, the fringes are no place for his ease and his detail. So “ambient noise experimentation” can’t be accessible? Is that it? The response is the most bloated of questions: How far can Hecker’s recent album drive you inward?

Uh, infernally so? That means that Harmony In Ultraviolet, Hecker’s first for Kranky and sixth album, is a shuddering, visceral implication of decay. No, OK, more than that, of epochal decay, of penumbras of radiation emanating into space from an old, saturated world. The album is circular, ostensibly in track titles, but cerebrally in a constant ebb and flow of static that buries, or sometimes shelters, a disarmingly plodding beat or bare melodic figure. And shit is loud, worms of drone climbing over each other as whirlpools of reverence and reference to Sturm und Drang industrialism set out in percussive half-measures; shit is restrained, always aware of digital and aural confines, as hopelessly subdued by comfort and borders as any fifty-minute span can attest to. And it’s shit, an unnerving gut rot of muddled manipulation at odds with echoes of subdural sonata something-or-other. It’s true we’re speaking in remnants, strange for the thick bullness of Hecker’s sound, but each song, especially those titles split into carefully arrayed parts, carries the weight of post-moment reflection. Immediacy is sacrificed for segmentation, for a kind of persistent dissolution mirrored by artifice and slow-motion strength. Even when defined in circles, even when tantamount to a collection of harrowed song suites, the tracklist doesn’t funnel and it doesn’t orbit, but instead relishes in fallout. It winks at poison.

Because for all the grand modifiers that are tossed at something so heavy, Harmony lives up its simple name, attempting a balance between not so simple parts. “Chimera” pulls at arpeggios of synth pulses with buzzing traffic and Sisyphus squeals, a dichotomy, or maybe a tempering, made more apparent during “Whitecaps Of White Noise I,” where shards of organ and skittering drum taps fight for staccato over loud, growling low-end power plant noise. The effort, expended, melts into sirens of buttoned din, trying again to split in “II” but are too processed to escape what can only be described as chaotic legato. And yet, delicate piano breaches the wall, stabs here and there, with little respect for repetition, and a sense of balance is at least recognized; maybe never achieved, but never really satisfied with achievement. Ha!: Hecker’s an underachiever too Sherlock Holmes for his own good. There’s idealism in the limits he exploits, so much so that by the time “Blood Rainbow” dies (and it is a sort of death), what’s left unsaid, or unheard, becomes a statement in itself. Maybe that’s the key to each “Palimpsest,” tracks short and unadorned with anything but twinkling electronic fodder, the notion that thresholds are impressionistic -- that, yeah, they’re relative, but maybe that’s too apathetic a term -- and that’s why humans, those impassioned little vessels, keep superseding them.

The conceit’s in the realm of high school binder graffiti, and Harmony’s cover art doesn’t help. Fraying pictures are lined up in memorial tomes of lost lives, a pretty bold-faced allusion to some sort of war cost. Maybe. The “Spring Heeled Jack,” while a popular English ghost story, is, here, accompanied by opaque motor churnings, conjuring up a sense of hanging, spectral dread. Machines are draped in fatal cobwebs over every inch of the LP, omens of history ready to repeat themselves and usher in a time of apocalyptic change. Perhaps the album’s largest misstep, though, is its implication of Death, capital “D,” a tone so dreary and so blistering that every note, noise, and second shoulders an expectation of meaning much too broad for whatever Hecker can put together.

Of course, anything remotely emotive and ambiguous to interpretation is hindered by blanket statements of audience participation. Like any great novel, we can defend, the electro-ambient-noise-experiment is only as great as the listener in its face. So romantic, sure, but still, so irresponsible. Harmony In Ultraviolet is meticulous and sprawling, a paranoid piece of contemporary anti-structure ridden with the awesome expenditure of any thriving society’s morals, fuels, politics, and energy. It’s tiring, but also as deft as Hecker’s first, great Haunt Me Haunt Me, Do It Again (2001). And it’s louder, splitting seams, taking names, and losing identities in a mass scuffle to walk the line between organism and autonomous, powerful mech. But that’s just me. That’s the butterfly effect in my stomach somewhere down the digestive line.