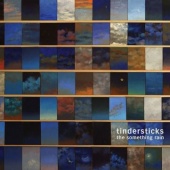 If you’re going to be really late to a party, you hope that when you finally show there’ll be someone around to catch you up. Such is my predicament with regard to Tindersticks, the English band that has been playing and recording music for most of the time I’ve been alive and that I just discovered via The Something Rain, this quietly great new album of theirs. I’m lucky to have a few dozen colleagues who know more than me about everything that I can ask about the Tindersticks back catalogue (Jordan and David: “It’s all great!”), but more immediately, the band turn out to be exceptional hosts. With that name, first of all, which is so apt to their slow-burning style it’s uncanny; these are songs that smolder, that give off a stream of steady smoke and, every so often, spit fire at you to make sure you’re listening.

And then there’s the introductory piece, “Chocolate,” which at a slow nine-plus minutes lets you know in no uncertain terms that this is an album to sit down and listen to in the old-fashioned style, rather like the way human beings once gathered communally around the fire. “Chocolate” essentially takes the model of the Velvet Underground’s “The Gift”—extended instrumental vamping accompanied by a spoken-word story with a nasty kicker of an ending—and makes warm audio caramel out of it, sucking you in with a sparsely gorgeous keyboard melody whose five or six notes make this extended ramble more blissful than one could have imagined. So lovely is the music that I always have to force myself to focus on the story—which is worth the denouement, and I won’t spoil it for you, but the real star of the song is the band. And as I’ve learned from my recent listens to the group’s soundtrack work for Claire Denis’ films, that’s largely the story of Tindersticks.

It’s not that the band is flashy—quite the opposite. Rarely does one instrument ever stand out in the mix or the arrangement, and there are no guitar or keyboard solos to speak of. Each song is an impeccably crafted whole, and it is on the whole that the band focuses their energies. “A Night So Still,” for example, stitches together drifting organ arpeggios with an ethereal guitar hum and sparse percussion to create a hypnotic bed of sound over which singer Stuart Staples croons his nocturnal poetry. And on album highlight “Frozen,” the barest of elements—a muted guitar strum, a saxophone howling in the background as if into the wind—come together to make a groove so haunting that if you stop the song mid-stride, it seems to keep turning over in your head well after the track has ended.

Every song takes its time to develop and they all feel deeply organic as a result, as if they grew on sunshine and water, which is appropriate for an album that employs so much natural imagery and metaphor (take another look at the band name, album title, songs like “This Fire of Autumn,” “Frozen,” etc). Such drawn-out and slow-burning songs can be less than thrilling in certain moods, to be sure; even if you’re willing to invest some time in the record, tracks like “Medicine” might occasionally make you want to reach for that skip button, especially when you have “Frozen” waiting in line. But for the most part, the band shows impeccable taste with regard to what they stitch into these sprawling songs.

And finally, there is Staples, holding everything together with his distinctive, emotional crooning. That I’ve focused more here on the stellar arrangements of his bandmates shouldn’t belie the fact that Staples is the uncontested focus of every one of these songs after “Chocolate.” And truly, he is a powerful presence: his quivering baritone lends a certain nebulous pathos to everything he sings, making the repetition of lines like “Come inside, we’ve been expecting you” both ominous and inviting simultaneously. Sometimes, he sounds as if he’s going quietly insane: you listen to him sing “If I could just hold you” over and over at the end of “Frozen” and you hear desire turning into passion turning into obsession.

Madness also is evidenced by repetition, psychologists tell us: no surprise that Staples should sound a bit mad here and there, then. But it is maybe a bit surprising that it’s so damned interesting to listen to, and that, along with everything else on The Something Rain, is a powerful testament to the skill of the musicians Staples has surrounded himself with. Madness, fire, cross-dressers, whatever: they make you feel right at home.