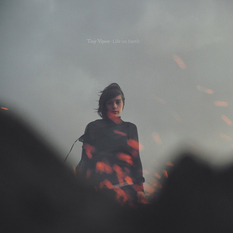 There are summer records and then there are summer records. The first kind soundtracks barbecues, or beach parties, or whatever the hell else one does in the summer that involves other people, water, and/or heavy drinking. The other exists almost exclusively to be listened to in extreme heat, ideally without motion, and in that heat they become the stuff of nightmares, their singers capable of lulling a listener to sleep and then waking them at their darkest, most wrenching moments. Jesy Fortino’s second Tiny Vipers album, Life on Earth, is one of these. Don’t make any mistake: despite the fact that there’s a campfire and what appears to be other people on the album’s gatefold, there’s about a 99% chance that you have no business playing this for anyone on any camping trip not being routed to a funeral.

The only word I can use to describe the experience of Life on Earth is “harrowing,” and in the same way that I would use it to describe either of the last two Scott Walker records. This is a record only a few minutes shorter than Red House Painters (Rollercoaster) (1993) or Low’s brutal Trust (2002), but at least Mark Kozelek wrote choruses and Alan Sparhawk and Mimi Parker had the kindness to bookend the seven-minute songs with moments of much needed light. Fortino writes songs like Kozelek but her compositions keep his length and largely avoid his density; this is 64 minutes of relentlessly austere music for guitar and voice with almost no additional instrumentation, very little apparent repetition, no hooks, and some of the most devastating vocals I’ve heard in years. It’s also one of the most difficult listening experiences since those aforementioned records. It doesn’t even have something akin to the moment in “The Escape” where Scott Walker does a Donald Duck voice.

Maybe because Fortino treats her voice as a weapon, slow and cruel. It doesn’t need to perform any theatrics and it doesn’t; she occasionally opts for Joanna Newsom-esque melodic turns, but for the most part her vocals are hushed, communicating effortlessly her imminent disintegration. From track to track her words rarely jump out, though she fixates more than anything else on pre-civilization imagery, pronounced loss, and death. On the title track she sings “So I call out to the night / though I can see that there’s nothing at all” and “I won’t look back toward you / or this crazy world”—nothing can better summarize Life on Earth as a listening experience. On closer “Outside” her first lines include the observation “The problem with life is you can’t do it twice / and you don’t understand why you came.” Provided the songs preceding it do the damage they’re ready to do, this one simple lyric turns explosive.

Because these songs are so barren, the moments in which anything breaks her stark presentation take on weight and power they otherwise wouldn’t possess. The first of these moments comes in “Time Takes” as a bass-y sine wave proceeds to devour everything that comes before it and then becomes the center of “Young God,” which—in light of its unbelievable brutality—can only be read as a nod to Michael Gira. Compared to the rest of the album, “CM” sounds like a point of entry; it uses a picking pattern that’s easy to hold onto and it’s the only song to run under four minutes—which, of course, means that it had to appear seven tracks in. And on the album’s penultimate track Fortino finally lets whatever darkness was looming over its preceding 50 minutes flood in completely, “Twilight Property” claimed by a wash of spectral noises.

So, uh, yeah…this is a difficult record. In one sitting it’s almost too much to take, Fortino’s worldview and approach to composition so uncompromising and insular. Introspection has always been at the core of singer-songwriting, but Fortino seems completely uninterested in letting her listener into her world. It takes commitment, and I’m still not certain just what rewards it’s hiding or how one best approaches an album like this one. Yet at the same time I find myself drawn back into this crevasse, trying again to find answers. It’s not easy listening; it may in fact be a case in which one needs to add hundred-degree heat before there’s even a chance of excavating something.