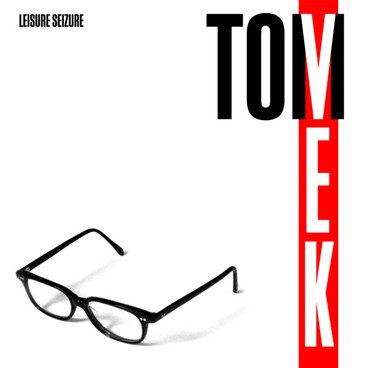 Tom Vek, not unlike the Juan MacLean or LCD Soundsystem, goes about making dance music in a way that seems totally workmanlike. It’s hard to take issue with it. Which is to say that it’s professional-sounding, refined-sounding, and scoped-sounding; “reliable” is probably the nicest way of putting it. Vek’s drum programming is just inventive enough to complicate the Gold Panda/the Field-level repetition of his samples, and his samples just atmospheric enough to convince that something like Leisure Seizure is a dance record and not a bad rock record. And so you can reliably toss on any Tom Vek album and know that it’s inoffensive enough to drive, say, a cosplay party, just so long as said party’s cosplay is at least loud enough to obscure what Vek is saying. That’s because, also like the Juan MacLean and LCD Soundsystem, the most unlikeable part of this workmanlike dance record is the personality fronting it.

Vek’s We Have Sound (2005) was part of a mid-decade wave of dance music that seemed to simultaneously evoke garage and new wave. This was the same year, not coincidentally, of LCD Soundsystem’s self-titled debut, with which We Have Sound shared the characteristics of beautifully produced music combined with snottily delivered and blindingly stupid lyrics. Leisure Seizure is no different, though these six years later it’s just slightly askew of context; LCD Soundsystem is gone, and Vek no longer benefits from seeming part of a larger trend. What this record’s arrival in 2011 allows us to do is look at Vek a little more clearly, without the buffers of novelty, and listen closely to what it is Vek is going on about.

First thing worth noting is that Vek continues to deliver his lines with great aplomb, and it’s defining, for better or worse, in a genre where you can put Vek’s backing tracks alongside any from the DFA catalogue and not really be sure who you’re listening to. His aural and lyrical tone, seaming perfectly, get at the crux of his obnoxiousness: Vek’s bleating is delivered with exactly the kind of self-assuredness required when writing lyrics addressing some anonymous “you” with nonsensical accusations, which is how he starts nearly every line of “A Chore.” This “you” “doesn’t really want to know”; “believed at one time” but “now wants more”; “perceives as life [what] is no more than a chore”; and is “not really listening to me” (repeated four times, at great volume and with monotone enthusiasm). On “Aroused,” Vek layers Nickelodeon-rock synths, and on the weirdly-spelled “Seizemic” some haunted house two-chord refrain, but it doesn’t really matter: he spends their duration hurling nebulous charges at this “you” every other line. This person is really pissing Vek off. Wait, aren’t we supposed to be having a good time?

Who is this person at whom Vek is constantly spitting, who, by Vek’s own admission, is not even listening to him, is completely ignorant, is selfish and lacking in perspective? Why is almost this entire album addressed to this person or group of people? What is the cause of their shittiness? And why should I, the listener, with whom Vek is supposedly sharing his frustration, care? Or am I the person he’s talking to, in which case, again, why listen to an album so derisive and condescending? Vek describes a world populated by fools and the assholes who single those fools out, never once wondering why anyone would voluntarily choose to spend time in this world.

Where you could go so far as to accredit Vek with approaching a theme you also have to ask why he even bothered. “We Do Nothing” is, to give him the most credit, about privilege, and to give him the least, about people who do nothing. It’s not like Vek has anything to say about it, but at least he starts talking about “we” instead of “you,” and a line like “We value our worth / We value everything inside / I don’t think we’ve stolen anything outright” might actually constitute a position, a value, a declaration rather than a negation. (Further to his credit, the line is delivered over a stuttering and cool drum beat that evokes Russian Futurists.) This kind of generational malaise, or whatever, seems simultaneously aware (that the malaise, or whatever, exists) and completely unaware (that it’s fucking boring to hear about for the millionth time). In either case, is this topic worth dedicating a recording budget to, worth touring the world and singing to hundreds of people about? “We Do Nothing” is Leisure Seizure‘s best song, and it’s about people who can’t be bothered to do something worth getting bothered about.

The album is no worse than on “World of Doubt,” with its awful proto-grunge guitar and cringe-worthy lyrics. The tense-swapping line, “The end you think that you want / Isn’t comin’ like you thought” sounds exactly as awkward as it reads, and then there’s “I have my ghosts behind me and they’re a really fly crew,” which I’m going to decline to comment on in any way beyond typing it out here. Anyway, Vek manages to sound smug and idiotic at the same time, which is something.

Somewhere behind Vek, Leisure Seizure is a perfectly fine dance record. It’s well-produced with some nice drums, but it simply has no reason to exist. Where it approaches subject matter it does so with a shrug, and everywhere else it offers cynicism and invective. Vek has convincing attitude, but the way he talks and what he says makes him sound like a jerk, so it’s not his company where I want to spend any significant amount of time. He’ll continue to operate best when he’s remixing and contributing singles to compilations—forums where, thankfully, the personality he puts forward on his albums can’t help but take a back seat to a project larger than himself.