1. We Do Something Together Every Summer
2. Guide to Edible Flora
3. Paddle Snapped in Half
4. Where Have All the Indians Gone?
5. Kill the Devil in His Bed
6. Haunted Lake
7. Wendigo
8. Left Behind
9. The Searchers
10. Animal Spirits
11. Brook Trout
12. Advice from Plants and Animals 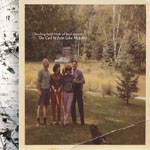 Touching Earth Made of Steel

Of tourism David Foster Wallace writes, in a point that is not as evident as one might think, that it is the very presence of tourists that dilutes, bastardizes and ruins the essence of the thing—of the thing’s specialness—to which said tourists have traveled in order to witness and experience. Wallace might as well be writing about indie music, whose obsessive (though, unless I am imagining this, lessening) insistence upon the undiscovered, whose fetishization of a specialized and necessarily obscured knowledge, is (ironically) well known. The lid can’t ever go back on the now compromised act; one can’t ever undiscover or rediscover Arcade Fire or Neutral Milk Hotel. To have a multitude truly grasp why one has chosen a record for fetish property is to divest it of its status and destroy one’s ability to fully enjoy it.

And destroy is exactly what my laudatory review might do to the heretofore unadulterated experience of listening to Touching Earth Made of Steel, an Ottawa band that doesn’t tour, doesn’t play local shows either, recorded this majestic record at home over two years and only seems to sell it (and its similarly excellent predecessor) in a few select independent record stores. The proverbial handful of fans possesses something more than just a copy of The Carl Wilson Lake Mystery, something that is actually, unassumingly special—an unknown local band whose quality, despite the lack of a broader (or really any) popularity, is nonetheless obvious. Doubly special for a town like Ottawa that loses its best bands to the self-declared big time of Toronto or Montreal shortly after they release their self-titled EP. In attempting to draw your attention to this band I’m robbing some small bit of Ottawa, am rendering glaringly public that private conversation that occurs between the denizens of a city’s music scene and a band that, apparently, has few aspirations beyond it. Thank goodness I’m not at all influential.

The tourism thread (ruining thread?) doesn’t end there. The Carl Wilson Lake Mystery elaborates on the true story of two ill fated couples who, in 1972 head to Ontario’s gargantuan and largely untamed Algonquin Park for a vacation—“No more rooftop heated pools” they vow in the album opener—whereupon they promptly disappear without a trace. The band’s particular brand of indie is stutteringly technical, unerringly melodic, accessible but chimerically constituted, not unlike the best of Pinback or Mineral. The band acts as a throwback of sorts to late emo and in so doing captures both the time capsule feel of the album’s retrospective bent and the album’s narrative trajectory—the hopefulness projected by the couples as the undiscovered forest pulls into view; the eeriness of a gradually worsening situation as they become lost; a last-ditch search by frantic loved ones; the fatalism of a coming darkness to which all eventually become resigned.

To drive the couple of hours from Ottawa to Algonquin Park to camp or portage isn’t a rare experience, and that the couples weren’t found is, in a morbidly fascinating way, equivalent to the way the continued secrecy of Touching Earth Made of Steel’s uncomplicated grace and staid musicianship makes their music that much rarer and more enjoyable. Mystery and romance are interchangeable, and it seems they know it. The band here populate the park with spirits that are neither pro- nor antagonistic but to which the eventually acquiescent travelers transcend as they accept an inevitable fate. The Carl Wilson Lake Mystery is ultimately cathartic, a metaphor for the kind of truths born in the crucible of near-death (or, in this case, certain death) experience. Mined territory perhaps, but masterfully retold. And in the end the revelation of the simple, metaphorical economy of the record—the ruthless efficiency of its narrative and scoped confines of its arrangements—is telling. This is an album seemingly produced by a band feeling an utter lack of pressure, and it’s better for those optimal conditions.

If any degree of fame, however minute, has a correlative degree of exploitation, preemption, and loss of control, then Touching Earth Made of Steel are as uncompromised as a band gets. Thin line to tread for a critic, no doubt, to know that to praise the band and to reach as wide a readership as possible is only to potentially diminish what, for those of us in the know, is a good thing going. There’s a level on which I’d like to keep The Carl Wilson Lake Mystery to myself—if only to place in amber the notion of secrecy, of the untapped mystery from which the band’s appeal resonates, which disintegrates a little bit more with every unchecked day of precisely this kind of exposition.