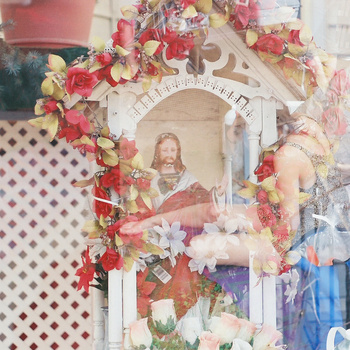 #Realtalk: 2011 saw yours truly as being a consistently celebratory voice for the spew of fucking cool bands and split cassettes fire-hosing from the neck-hole of the Two Michael Jordans (MJ MJ) label. I kept intending to knuckle-down and back off for a time. Obviously, as I recited such resolutions to myself—that I’d write about non-MJ MJ shit—this was the moment when the MJ MJ guys decided to send me two mixtapes released last November; the first, a sample dubbed Back In Bizness, and the second a split mixtape, Messy Hopping, featuring the latest work of two artists that provided the bombastic, ear-cocaine-addictive opening tracks on Bizness, Messy Sparkles and Tree Hopping.

Gabriel Berrios’s solo project Tree Hopping drives the cassette’s first half in a familiar MJ MJ direction, slick peals of electric guitar and a stirring outburst of live, brisk drums barking right out the gate. Less spastic than Messy Sparkles’ second-half contribution, the tracks shake with all the fresh, good-natured energy of a ticklefight—the freshness of it being a nice turn from previous EP, Dance Band, where tracks like his cover of New Order’s “Dreams Never End” was composed almost entirely of loops made from sampled beats or keyboards pre-recorded, programmed, and re-sampled with only Berrios’s guitar recorded live in a single take (a single take which spanned the entire length of the tracks).

While the split with Messy Sparkles does include Dance band track “Nervous,” the rest of Tree Hopping’s tracks on Messy Hopping primarily employ live recordings: live drums, Korg and frenetic vocals, smacking of the same pop-rave verve as Youtube clips from live sets with lyrics shouted and danced-out around a house-party floor by a sweaty Berrios half-hunched over his guitar. Having not a whiff of drowsiness, the A-side starts and seals off the cassette as something enjoyable and not even a shuffle-button away from party-ready, beginning to end.

Next comes Austin’s JD Paul, who records and performs under Messy Sparkles, a name that would normally drive a wedge between me and whatever sound that name is producing—and, certainly, the earliest moments of “New Blessings,” with the radio-tuning squeal going apeshit all over the intro, exacerbates this initial hesitation. Yet, it is a virile and roughly distressed sound of brightness that ensues, with bursts of some excellent steel drums, boom bap percussion, and island vibes mired in garbage-y, glittery dance beats and sampled, saw-toothed flotsam.

While following “Dresses” chills out via shaker-rhythm and his saturated vocals head in a more melodic direction, Paul employs through his four tracks a consistently chaotic, self-defacing delightfulness appropriate to his moniker. Rick-Ross-busted bass beats in melodic “Havadine” playfully accompany a fizzing-out videogame noise and recurring island leanings (check the bounce of marimbas in pluckily resilient track “New Doors/Hidden Rooms!”) It’s an ecstatic and altogether impressive spectrum of samplings and instruments, all incorporated with an intelligence that reveals how capable alleged “party animal” Paul is of incorporating them into some exciting song-matter. His work is easily representative of the label’s consistently attention-deserving production/mixing.

Usually I only make resolutions I know I can keep—“no sex with homeless people”; “learn more about whiskey as I consume it en masse”; “wash my shower curtain”—but a few weeks into January and the not-gushing-over-MJMJ-splits goal is a goner. And already another split was released in December. They should probably just put me on their payroll.