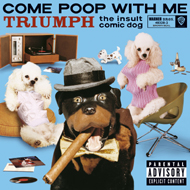 Come Poop With Me

What a horrible waste. There are so many things that could have gone right with this album, but it just ends up proving how essential visuals are for this style of comedy to be effective.

The CD part of this set involves a mixture of live recordings from a performance at the Bowry Ballroom in NYC and studio recordings. Some of the live recordings have moments that make you crack a slight smile, but only because you can envision a puppet with one too many legs holding up a microphone to Conan O'Brien or Adam Sandler. The studio pieces are just plain bland and the prank calls fail miserably - prank calls to a Chinese restaurant "looking for your brother" aren't funny when the victim of the call don't understand that the voice on the other end of the line is supposed to be a dog. Even I think the song "My Mama" goes over the line - and when I think it's gone over the line, it *HAS* to be fucked up. I don't want to ruin (or should I say "inflict") any of the actual lyrics - I'll just say that it has to do with Triumph asking the human man who lives next door to be considerate and calm during the bestiality sessions with his mother.

The other half of this set is comprised of a DVD that contains clips from the live show recorded at the Bowry Ballroom, including stuff that wasn't on the CD (for obvious reasons). Two of the most uncomfortable clips involve Ben "The Dell Guy" Curtis and Jared "Subway" Fogle. The first clip is with Curtis and Triumph - either Curtis doesn't understand the style of humor Robert Smeigel uses with Triumph or was really offended during this appearance. He becomes quite stand-offish and short-tempered, which only causes Triumph to rip on him more. When Jared is introduced into the mix, things go from awkward to flat-out uncomfortable - even for the audience and home viewers. Curtis shows how upset he is with having another minor celebrity on stage by saying "Triumph, you call this competition? I call it a sandwich delivery boy." Jared tries to be nice, but to no avail. At least I don't wonder if Curtis really did have drugs on him at the time.

In the end, please don't buy this CD. If you absolutely have to, borrow it from a friend or try and watch the DVD somewhere. There's no reason to make record labels think we will tolerate sub-par comedy albums like this.