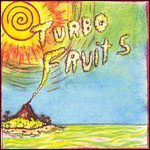 Growing old is shit. Time just seems to fly by. I remember when my friends started dating. Now they've got kids. Some have even got children that can talk and sing along to "Umbrella" by Rihanna. Bands, too, are growing up quicker then they used to. I mean, in my day bands had to have a few albums under their belt and at least one on tour fallout before the side-projects start cropping up.

But after checking the calendar and my CD rack I deducted that yes, only one year after their debut, Jonas Stein and John Eatherly from Be Your Own Pet have a side-project called Turbo Fruits. I'm struggling to figure out why because I can't think Be Your Own Pet have yet to exhaust their particular strain of scratched gonzo funk-punk -- in fact, they're back in the studio readying their sophomore release. It could be that the guys decided to leave Chez BYOP and head for the stag cabin to sink some beers and not have to deal with Jemima Pearl's bras drying on the bathroom radiator. I come to this cute conclusion because it is certain that this is a male album. Grrr.

That's not to say that it's full of posturing cock rock or endless solos. It is just as lean as the Be Your Own Pet debut, clocking in at just under 35 minutes and barely pausing for a breath between the fifteen tracks. There is, however, a frenetic frat-party rush playing through every song that makes it sound like the soundtrack to some hitherto undiscovered punk version of Caddyshack. Although, that is not to say that this has descended into Blink 182 or early Red Hot Chilli Peppers territory -- a land where songs are recorded in a fog of farts and the unmistakable stench of chronic masturbators wearing the same underwear for weeks on end. There's more to this album.

Eatherley's machine gun drumming and Stein's riffing are still at the core but there are tinges of Zep-style blues-riffs, bluegrass, and even surf guitar, all delivered with energy and drunken abandon. "No Drugs To Use" opens the album in a blistering New York Dolls style singalong chorus and heady vocal attack. It's a blink and you'll miss it song ending with a howling falsetto hook, stopping for two seconds to launch into "Murder" which comes across like the White Stripes at double speed. Jonas' voice is not the most distinctive. He does a great affected slur which raises it above the usual whiny delivery that typifies most of what is passed off as punk. But fuck it, the songs are great and even if his voice is weak you've got the sheer momentum of "Know Too Much"'s high-register chords and rumbling drums to carry you along. This is infectious and I defy anyone to hear the Ween-covering-"Crazy Horses" summery lunacy of "Volcano" without breaking into a goofish grin and wanting to be part of the band.

The album doesn't really tire, though the cheap rhymes on "Pocket Full Of Thistles" do make you groan. All I need to say is the song opens with them whistling and you can see the rhyme a mile off. Despite this Stein and Eatherly use dynamics to best effect. While "Crybaby" may sound like a straight forward Ramones three chord pop, "The Run Around" thrashes like The Violent Femmes with teeth and "Pop Tart" has strains of The Breeders' "Saints." There's even a hint of the Jam in the R&B riffing of "Ramblin Rose," a song capped by an inspired screeched vocal which rounds off a break-neck set of five songs in the amount of time it takes Elbow to tune up. The three minute heroes of punk's glory days were dragging their heels in comparison.

After such a blistering tirade of hedonistic fury it is a shame that they kill the party with closer "The Ballad." The only ounce of flab on the album, it sounds like a lazy Frank Black B-side with an ugly rhyme for a chorus "Now I'm down with a frown." It could be an attempt at showing development or maturity. They shouldn't bother trying. Growing old is shit.