Other Records by Two Gallants 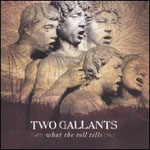 What the Toll Tells

What do you do with a band who’s named themselves after a James Joyce story, who write ruthless, epic ballads that aspire to Guthrie/Dylan terrain and appear to be entirely earnest in their efforts? I’m not exactly sure.

First of all though, as I did, you might allow them to entertain you. A few weeks ago, via a Canadian-sent mix CD, I heard my first Two Gallants song, “Las Cruces Jail.” Unprepared, I was left reeling as the song barreled through my shoddy car speakers and shook its fist in my face. Amidst its rollicking, livid antics, something comical was betrayed in its tight, upbeat Stray Cats-esque rhythms and fragments of borrowed lyrics like “I shot one man on the county line” and “In my hour of darkness” and I started to giggle. Within seconds, the song achieved a sort of three-dimensional fervor and it was as if the Two Gallants -- I’d seen no photos, but envisioned toothless mugs and unruly eyebrows -- had climbed into my car and were screaming and thrashing about. It was loud, furious and fun. Funny. I listened to it again. And then I thought about how I don’t listen to enough music that makes me giggle.

Two Gallants are San Franciscan natives Adam Stephens (vocals, guitars) and Tyson Vogel (drums, vocals). What The Toll Tells is their second release, after 2004’s The Throes which was put out on Alive Records. A hard-travellin’ band, Two Gallants have received a lot of attention in their short careers, especially in the U.K. NME called What The Toll Tells “literate, yearning punk folk, [that] never stops dreaming.” Then, they went so far as to say this: “they're songs that share the same spirit as a young, reckless Johnny Cash, or a pre-electric Bob Dylan, odes steeped in the lineage of men such as Woody Guthrie, Leadbelly [and] Phil Ochs.”

For decades, critics and musicians around the world have been championing “new Dylans.” The New Gallants now have not only Dylan on their backs, but Johnny Cash, Woody Guthrie and Leadbelly, too, and it’s the kind of praise that should make any songwriter quiver. On one hand, the comparisons aren’t the band’s fault. On the other, you can’t really say they haven’t asked for it.

To reiterate, they’ve named themselves after a James Joyce story. They seem to be calling themselves gallant in the same ironic vein Joyce intended for the subjects of his story, but the their earnest, troubadouring image would seem to defy this. Their songs -- which are fairly pleasant and fun if you’re into this sort of thing, and I generally am -- melodically, thematically, and lyrically echo all of these artists, and more (I hear some Mississippi John Hurt-style-fingerpicking on “The Prodigal Son” and the opening of “Steady Rollin’” sounds almost identical to Guy Clark’s “L.A. Freeway.”) Is this a bad thing? Not necessarily. But after listening to “Las Cruces Jail,” the most innovative track on the album, I had a lot of hope for the Two Gallants.

With all the Guthrie, Dylan, and Cash comparisons being thrown the band’s way, I think it’s important to make a few distinctions. The desire to tell daring, expansive, mysterious stories along the lines of these folk/rock/country songwriting masters is not the same thing as accomplishing it. On the whole, What The Tale Tells employs stock language to present stock characters going through stock conflicts. Somehow, the mother who’s “drowned in a pillow of tears” over her prodigal son -- on, you guessed it, “The Prodigal Son” -- doesn’t evoke half the sentiment as Cash’s pleading mother on “Don’t Take Your Guns to Town.” Similarly, the lyrics “I shot my wife today / threw her body in the Frisco Bay/ Had no choice, it was the only way” reveal only that the Gallants were stretched for a rhyme.

It’s not that these kinds of songs can no longer be written, but they still need to be written well to be effective. Dylan picked up from Guthrie and moved forward. I’m not sure which century the Two Gallants believe they inhabit with the lament for the ex-slave, “Long Summer Day” -- which set off a lot of alarm bells for me -- or the language “to me they’s all the same” on “Steady Rollin.’” In their early twenties, the Two Gallants have got the audaciousness. Now they need some time for reflectivity.