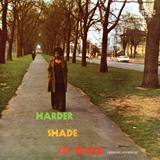 The tradition of dub reggae—the anonymous crapshoot of poorly marked singles, constantly remixed dub versions, and mind-blowing bass—is pretty much wholly bastardized by now, a lost genre the product of a forgotten time-period, but romanticized and disparaged just enough that a reissue treatment can make an album like Harder Shade of Black seem essential. A peculiar product of the mid-seventies dub reggae boom, Black was built as a showcase for producer Leonard Santic, a collection of the seven inches he’d been producing in Jamaica for bigger names like Augustus Pablo and Horace Andy. But like Nuggets or Urgh! A Music War or even the Singles soundtrack, it also became a small marker in a movement much larger than itself. Over the years it’s been—as is the genre’s wont—reissued and added to and mixed around, with the name remaining as a kind of quality assurance or nostalgic token. Pressure Sounds’ new reissue restores the iconic cover art and liner notes, and helpfully points out the late additions. But most importantly, this clearheaded reappropriation boosts the sampler into the Internet age, and in its canonized state props up an oddly accumulated set of minor works by often overlooked artists to open a singular window into a less heralded musical movement.

The lynchpins of the collection are simple pop tunes like the opener, Gregory Isaacs’ “I’ll Be Around,” which takes the simple balladic sentiment of the title and layers dissonant horns and a simple dub beat around it. This is the strategy employed by Santic and ensuing repackagers (although Santic did get final say on this reissue): pair these songs with instrumentals whose sole purpose is to take a melodic theme and work it into a groove that ends up elsewhere, thus lending the amorphous and difficultly organized singles-and-remix-oriented nature of dub a surprisingly cohesive sound. “I’ll Be Around” morphs into Augustus Pablo’s “One Thousand Swords,” for example, which then slides into the titular “Harder Shade of Black” and Santic’s “Better Shade Of Dub,” both of which are dub versions of the “Norwegian Wood”-referencing riddim “Darker Shade of Black,” (meaning that the title of the album itself is something of a dub remix).

Got that? In any case, it makes perfect sense in practice. Santic’s production is fairly middle of the road for 70s reggae, not quite as pulverizing or psychedelic as the music’s best twelve inches, or accessible enough to count as pop reggae, but he makes the most of what he’s got. The casual experimentation of King Tubby’s, Pablo’s, and Santic’s dubs and redubs of each other make for a uniquely respectful, inviting mood, and the gradual deconstruction that each track represents is like a crash course in how reggae riddims work.

That said, it takes a certain state of mind, perhaps under the influence of some other Jamaican exports, to groove with Augustus Pablo’s iconic melodica when the bass isn’t as heavy as on a 45 and the riddims, not necessarily the most memorable I’ve heard, peter out too readily. Ultimately, the most durable dub songs, like Dr. Alimantado’s “Born For A Purpose” or Ijahman’s “Jah Heavy Load,” are melancholy but with a hopefulness that transcends Rastafarianism to express a spiritual longing that isn’t found in many other contexts. As in, a strange, rockhard melody lies at the song’s core. Here, Santic relies on covers like “Peace In The Valley” or more straightforward pop like Horace Andy’s “Children of Israel,” songs which don’t have the breadth or emotional complexity to make them as worthy of such strenuous dubbing.

All the same, Harder Shade of Black is one of the more consistent and illuminating dub albums available. Even newer additions, like Santic All Stars’ “Hell Boat,” whose Lee Perry-ish organ and catchy bass line make for one of the strongest instrumentals on the album, or I Roy’s silly “Yamaha Ride,” where he affects a Mexican accent, defending himself against womanizing gringos, manage to blend seamlessly with the originals, shedding light on odder parts of the time period from which this disc derives. For a genre that is ridiculously hit or miss, it’s always good to have some kind of cornerstone to hang on to, and as far as continuously morphing compilations go, Harder Shade of Black has retained its urgency for almost 30 years.