In the Shame Cave
1. Roses
2. Live @ Shwag City
3. FARMS – shitbricksandwiches
4. YRINBERLIN pt 1 (unfinished)
5. FARMS B sides
6. All This Love is Exploding Inside Me
7. The One Where Everyone Does the Limbo
8. HOW/SSS
9. Growth
10. Isolation
11. This Isn’t Fun Anymore 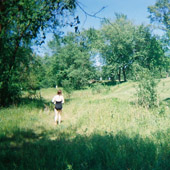 In the Shame Cave / ZOIO

Kicked in the pants ad nauseum by happenstance and acts of randomized shittiness (unemployment; getting hit by a U-Haul; getting a bus-load of equipment jacked whilst on the road), Vacation Dad has somehow risen above the gleaming a-hole-y-ness thrust upon his person/band by the universe and produced, for the pure enjoyment of my ears over the summer months, a viciously pert collection of sun-drunk singles which tread a spiderweb-dainty line between techno, Animal Collective terrain, and southwestern “California youth”-ishness. This of course is land frequented by many a Bandcamp band, and Vacation Dad’s solo member Andy Todryk seems to flit about it with a uniquely effervescent, shimmering, pixie-like prowess. Or, should I say “flitted”? Past-tense.

Because less surmountable than a downer like unemployment was the egregiously lamentable loss of all Todryk’s equipment and the meaty lump of cash it’d take to replace enough of it to continue working on what was initially intended as Vacation Dad’s debut LP, Nightmare Makeout. Earmarked as my NBH pick of the summer, it’s a project I was really hoping to see fleshed out. And though the sentiments around the ending of the Vacation Dad moniker (at least temporarily) verge on the Charlie Brown-esque, the brunt of the songs on ZOIO were recorded and performed in large during 2010’s blissful spree of touring with the MJMJ Records and FMLY group of artists—a spree during which every crumb of music-making paraphernalia was stolen, bringing the bliss to a halt and, potentially, Vacation Dad along with it. Fortunately, without tainting the ephemeral and explicit lightness of these albums with any bitter hindsight, Todryk has pulled himself up by the bootstraps just long enough to collect and remaster the existing material. Which happens to be, essentially, all the material he ever produced as Vacation Dad, finishing most and then leaving the occasional live or incomplete track. Available completely free from MJ MJ Records, ZOIO and In the Shame Cave are two albums, roughly forty minutes each, that together serve as a timeline, full canon, and extremely generous final gesture.

While In the Shame Cave is a mish-mosh of dusted-off Myspace material, live tracks, and incomplete sketches of songs, ZOIO is all that exists and will exist of Nightmare Makeout. And it’s…shockingly bright. Wet as Water Curses (2008), ITSC is spry, frenetic, as bonkers-fun as a champagne slip ‘n’ slide—or as this five-dollar bottle of wine I once got for Taco Tuesday called “Chill Out” (without the two-day hangover that ensued). Though I’m pretty certain my wine was comprised of apple juice and battery acid, the tracks Todryk produces have an unimposing verve I’ve never deemed capable without taking more E than I’d ever be comfortable with. Bright blips of sound, tinier than Owen Palette’s fingertips, be-speckle the dance tracks, twinkling like they’re being spritzed from a backyard sprinkler.

Spritely but disturbingly so, “Kill it With Fire” blast-beats and bass-drops its way into an atmospheric intro to previous Bandcamp favorite, ”Hemp Scented Body Lotion.” Flowing with the thoughtfulness of a live set, the second track seamlessly steps up in intent and playfulness, incorporating some snags of vocal sketches thrown out into sobbing bass beats and puddly loops. Even the distortion sounds more like waterspray than fog and lint-clogged screens. “Dan and I Drank Dayquil” is especially akin to some heartwarming and melodic Tinkerbell dance party; un-cloying, the waterfalls of artificial synth sounds compose Todryk’s main voice, while his own vocals sound like a pitch of echo or shadow—smudges of graphite on the gleaming surface of glass. For material to be worked into as dark a notion as nightmares, it’s an album that feels comprised of something ultimately translucent, something warm and clear for other elements to shine through. Dedicated to everyone who’s danced drunkenly with Todryk in alleys and venues, it’s an especially, surprisingly propulsive set of tracks that churn into one another with far less issue or inconsistency than I’d think given the rough sentiment behind the release.

From the ass-crack album art, to titles like “The One Everyone Does the Limbo To,” to the all-encompassing dance-friendly delirium, Vacation Dad has embodied a levity and humor that is difficult to hold in synchronicity with the hardships and basic, ultra-sucky turn of events leading up to the band’s demise. “This is the last material I’ll release under Vacation Dad for a long time” is a statement that weighs heavy on the soul, given how much excitement Todryk’s EP Miss You generated just a month or so prior. Working on the label and doing production behind similarly favored new music find, Yohuna, are certain silver linings. But, for what it’s worth, as he hangs up his hat, Vacation Dad’s departure from the scene has not gone unlamented. And these are two really fantastic albums to play him off.