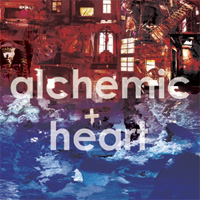 Like many experimental ensembles, Japan’s Vampillia move in calculated, lumbering steps, their gait a site of both intimidation and potential ridicule. For the past half-decade, the self-described “brutal orchestra”—that description delivered without a wink, tellingly—has established a reputation that borders on infamy, waylaying unsuspecting ears via marathon live shows bent equally toward the theatrical as the apocalyptic. Considering their set-up—an amorphous assemblage of pianos, violins, guitars, drum kits, turntables; eleven pieces in all—it’s understandable that they’ve mostly avoided the studio.

Thankfully, over and over across Alchemic Heart‘s fifty minutes Vampillia display an acute understanding of the dynamic possibilities of their form, continually treading a line between pretension and perfectionism while narrowly avoiding the built-in problems of both. It’s easy to imagine these concepts being executed much less successfully than Vampillia have somehow managed here, particularly given how devoutly self-serious they are about their approach—though admittedly that self-seriousness is also part of their appeal. Like Terrence Malick’s The Tree of Life—a similarly lofty, risky arthouse endeavor—Alchemic Heart refuses to shy away from big ideas or grand gestures, and it’s partly because of their earnestness that their epic is a thoroughly spectacular one.

Despite nearly identical running times and instrumental artillery, Alchemic Heart‘s two tracks are all but photo negatives of each other. Sure, the track titles disclose the dichotomy, yet again the ensemble subverts expectations by outfitting these pieces as if in opposition. The dyer Jarboe incantations and heaving riffage of “Sea” are offered up sacrificially to Merzbow’s enveloping swarm of digital noise, painting the blown-out horizons of “Land” not as a stable environment worthy of habitation but as sterile landscape overrun by the elements, as if positing sonic discrepancies between the way of nature and the way of grace. Like Stetson, Vampillia cede victory to an evolutionary course they allow to build organically through process, each violin trill searing, each piano line gutting. They balance each member’s contribution as if the inherent implications of more drama simply and eventually begets more drama, the tracks’ mirrored climaxes the only molecular similarity and thus only physical manifestation of the conceptual harmony between these fraternal twin behemoths.

Alchemic Heart builds and maintains a consistent tension through this duality. (The central contradiction here is that by underscoring difference the album establishes a stronger sense of wholeness and unity within itself; this, it turns out, is a pretty brilliant structural gimmick.) Casting a soft light over the proceedings, Jarboe and Merzbow add hints of unique color to the pallor of each respective piece without wresting attention away from the band’s magnetic drift. The opening five minutes of “Sea” is little more than Jarboe ominously intoning in a ghostly register above a mounting cauldron of ambience and mournful violin; things build methodically, each additional instrument—flecks of crystalline guitar, bare piano chords—gilding the outskirts of the mix in anticipation of the inevitable unveiling of a riff. And when it hits around the 11:30 mark, it’s easy to lose your bearings, so heavy its downward thrust, so hypnotic its inward pull. It’s a powerful moment—like black metal stripped of tremolo and left trudging along a naked chord progression—and a move which tends to get the band thrown in with the metal scene despite aligning just a closely with artists old and new such as Godspeed You! Black Emperor, Jim O’Rourke, and minimalist figureheads Tony Conrad and Rhys Chatham, all of whom have sketched prophecies of the apocalypse in similarly ambitious terms.

This pay-off is so satisfying in large part because of the almost Hitchcockian patience exercised in the tension-building ambient rumblings which precede it, and that proves to be Vampillia’s most surprising strength: despite the chaos wrought by the group at their most apocalyptic, they recognize the effectiveness of casting that power against a backdrop of restraint, and it’s precisely because they’re comfortable slipping into long stretches of foreboding calm that their eventual fits of destruction hit so hard. One might expect a largely improv-based eleven-piece post-rock orchestra to indulge too heavily in their musical proficiency, just as one might reasonably expect contributions from Merzbow to abrasively interrupt the flow of these proceedings; that composition emerges as Vampillia’s strong suit, and that Merzbow’s blasts and washes of noise gel harmoniously with their surroundings, are further testaments to the unexpected greatness of this record.

And in a weirdly spotty year for experimental music, an album of this magnitude feels not only refreshing, but necessary. Advancing slowly through the appropriate underground channels, Vampillia have chosen the perfect time—as well as, nominally, the perfect label—to stake their claim as one of the most commanding acts on the circuit right now. And with a full album to now back up the testimonials, it’s imperative to meet Alchemic Heart on its own apocryphal, vainglorious terms. Without question, they have lofty objectives—and this isn’t easy listening in any rational sense—but that Vampillia have seen each detail through with such conviction and competence surely makes this an album and a band worth celebrating, one hulking missive at a time.