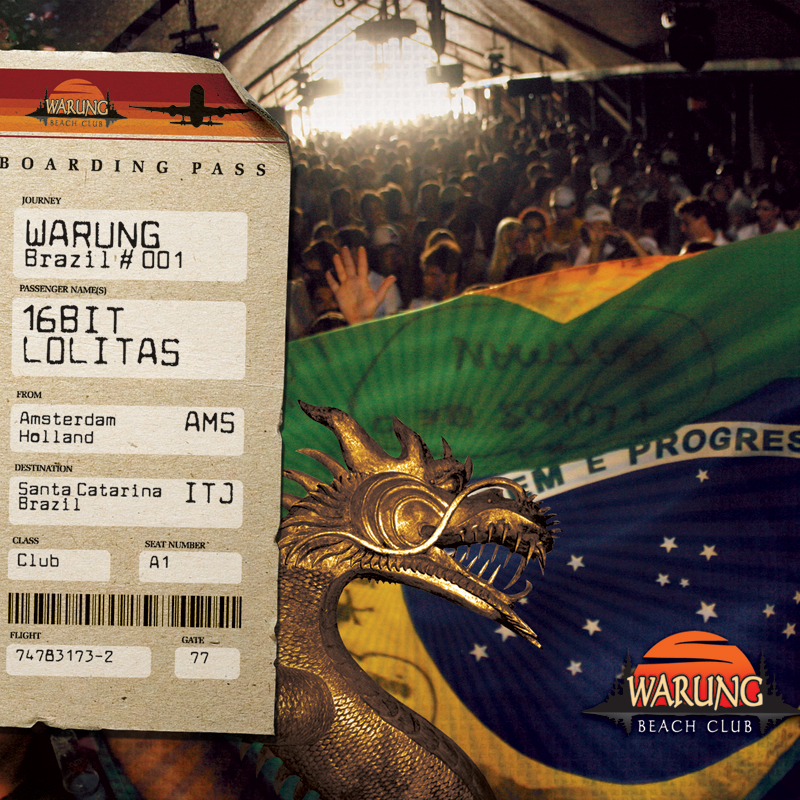 Despite the reckless recycling of Euphoria hits and the ransom of new ideas to vinyl, clubland will occasionally permit a breakaway molecule to fall direct into public consciousness whenever they’re feeling hospitable. It’s an offer that doesn’t come round regularly, and so it’s best to snag it under laboratory conditions if you’ve got the credentials and equipment. Brighton imprint Hope Records are hoping to do just that with the 16 Bit Lolitas: a two-man Dutch unit who’ve mixed a night’s worth of underground seven-inches into what would be their debut album, compiled in honour of the residency they hold at Brazil’s Club Warung. Spinning slab after slab of symmetrical bouncing into long after the bouncers have drawn the red rope, the Lols take the tension that scrabbles through their adoptive city and vector it into a soft beam of trance, keen not to fry the crowd and ditch them in the chill-out room. And so it’s with genteel relief that, when a line of flat boogie gears up into pensive techno on Lewie Day’s “Blistering Barnacle,” you can rest assured that the twenty-six track marathon you’ve started on will be conducted at a pace run for the organized. Worry ye not, o gawky straggler at the back so used to seeing the vests run away with the mineral water; this one’s a relay, not a drag.

For its first half, then, Club Warung #001 goes about showing exactly how the last few years have seen superclubs refined by an uprising in research rather than just competing with one another to see who can produce the most sweat. The material selected by the 16 Bit Lolitas here is for thinkers; the sound of people patrolling moonlit ring roads in the hunt for the night’s next pill, and there’s hardly a seam in sight as one score flows into the next. Sharam Jey’s “Don’t Lie (Martin Buttrich Mix)” shoots pulsar winks to Leftfield’s “Storm 3000,” and the poetic electro of Astrid Suryanto’s “Distant Bar (Gutterstylz)” recalls vintage John Digweed. It’s well beyond the entry-level progrsv house you find throbbing in crammed function rooms. Haito & Dirinerg’s “E-Love” even does things with a shy jazz synthesizer, and in between the nods to Timo Maas and Eric Prydz something tender conspires to bind wallflowers, winding down nicely with the piano and strings of Interplay’s downtempo “Highlove (16 Bit Lolita Warung Remake).” It’s an eclectic, opulent mix that fulfills its duty of keeping you bobbing for one hour plus, and Ariaan and Peter Lolita do a solid job of making sure everything stays focused and slinky.

However, it’s on side B where the real meat of the project gets dished and the duo truly come into their own. Quite literally in this case, as CD2 is a mix of entirely self-penned material that’s also available as an unblended download should any DJs wish to return the favour. Strangely, the Lols’ own compositions have a greater variety side by side when compared to the platter of artists on disc one, creating a sense of playful one-upmanship between them and the people they’re spinning: from the jetlagged jungle of “Karmageddon” through “The Repetitions Of Life”’s cinematic plod, you’re hooked into Café Del Mar nostalgia before numbers like “Cabardi Loca” fill the house with phasers. In spite of the cutting edge feel to the composition of the tracks, there’s still a deep waft of reverie, with the Chicane templates of “More Horizons” in particular coming across as so unnervingly 1997 it’s a wonder you don’t feel a sudden craving for Adidas. That said, the Lolitas know which way the watch hands wind, and the clockwise “The Heartbreak Files” gives you plenty of hope for the future, taking the form of an infectious house loop that arcs slowly upwards. Bootleg via white label immediately please.

On the whole, there’s a strange flux to Club Warung #001 that helps distance it from just another dance onslaught or the ennui of generic compilations. It sails gamely from the spinal highs of Ecstasy through the troughs of quasi-dubstep—the electronic menagerie scaled down to just the essentials—but largely the Lolitas keep their demonstration of declassified recording technology more juicy than its grimy Brit relative. Which is just as well if you’re planning to absorb the end product in one spin. One-hundred-and-forty minutes of progressive house might seem like a trial to the average listener but it’s by no means a draining journey. In fact, some form of athleticism is almost certainly the best environment in which it to experience the 16 Bit Lolitas and their chums. Running as the sun clears the towerblocks and dreaming of tonight and the club. It may be downtown Brazil but it pounds like midnight Kyoto.