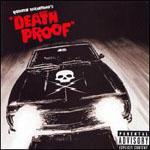 Tarantino’s soundtracks have somehow transcended the genre’s glut-induced relegation to bargain bin and synergistic cash-in status, and it’s not just from having watched such cache moments as Michael Madsen sawing off an LA cop’s ear to Stealer’s Wheel’s “Stuck In the Middle With You” or Uma Thurman dancing with adolescent spasms to Urge Overkill’s cover of Neil Diamond’s “Girl, You’ll Be a Woman Soon.” The soundtrack to Death Proof, like most of Tarantino’s soundtracks, is an extension of the geek bravado that informs his films, and I mean that in the best and most complimentary way possible: the passion Tarantino the collector and connoisseur feels for his fetish property is infectious, embosses what might be dead artifact with suddenly vibrant cultural and cool capital. When, during the film, Jungle Julia informs us with matter-of-factness that Dave Dee, Dozy, Beaky, Mick & Tich were the band for which Pete Townsend almost left The Who, the information is not only given to us as if it should be common knowledge, it also serves almost no purpose in the context of the film’s narrative. It’s a geek gesture, information for the elitists’ consumption and benefaction in a meta-film about geek gestures. It also encourages you to go check out the song, which is, conveniently, right here.

Of course, in contemporary terms we call this “product placement.” Had Tarantino instead told us obscure factoids about Windows Vista, we’d hardly be as impressed or pliable to his expertise. These are the same contradictions Tarantino willfully ignores in his films, upon which his auteurism (and marketability) actually depends; for us to get what Tarantino gets from arcane fetish property, we run into the same dilemma presented by Nuomo Group’s excellent Eccentric Soul series: shouldn’t we be the ones digging through basement 45s rather than purchasing a compilation or soundtrack at Tower Records? Does the music’s supposed aura of greatness survive intact? The question of whether you give a man a fish or teach a man to fish when it comes to accessing obscurist collectibles is at the crux of Tarantino appreciation, from the issue of whether repackaging subcultural hits for mass consumption is valid artistic expression to whether or not Tarantino should keep writing the N-word so liberally into his scripts. There are those who share his tastes, and those who want in on them, but it can’t be said that Tarantino doesn’t do his best to indulge both parties. He keeps the bar high enough to satisfy the anal retentive, yet sensational and accessible enough for everyone else.

The soundtrack to Death Proof

If Death Proof the movie is aligned with the Tarantino ethos, then Death Proof the soundtrack is cooperatively aligned with the film; the threads of both the cinematic experience and Tarantino’s overarching philosophy are readily identifiable. Aesthetically compliant in every way, Tarantino’s selection process remains as impeccable as ever. Jack Nitzsche’s “The Last Race” swells wordlessly into unapologetically glorious mono strings, a gladitorial precipice behind which the sound of roaring engines actually doesn’t sound as cheesy as it does perfectly kitschy. Smith’s “Baby It’s You” is economic 60s girl group pop in the style of the Supremes, and it contrasts so eerily and perfectly with the minimalist “Paranoia Prima” (from perhaps the master soundtrack savant, Ennio Morricone), that it’s no surprise Tarantino’s products, recycled as they are, have themselves become so novel and collectible.

Pacific Gas & Electric’s “Staggolee” tells exactly the kind of story defined by its seeming trivialities that Tarantino naturally gravitates towards. Its joyous harmonica and easy sway contrast with its talk of shotguns and urban/frontier justice, and that contrast is telling as to why it’s on the soundtrack. The song’s narrative, like the violent movie to which it’s attached, resists any moral center other than the etiquette and self-legitimizing world order that violence establishes. On “The Love You Save (May Be Your Own)” Joe Tex simply states, “I’ve been given ‘till sundown to get out of town / I’ve been taken outside and I’ve been brutalized,” only to finally conclude “but I ain’t never / in my life before / seen so many love affairs go wrong as I do today.” As if that were a real problem relative to being brutalized. Tarantino excels at choosing music that retains all the tension of a world in which violence and race is the dominant language, from where it can easily be transformed into that aforementioned collector’s exclusivity.

It’s important to contrast this set of music briefly with that of Death Proof‘s Grindhouse partner, Robert Rodriguez’s Planet Terror (soundtracks sold separately); Rodriguez wrote and performed much of the soundtrack to his movie himself (his usual M.O.), and where this might have afforded him the opportunity to provide exactly what his film required in terms of length and mood, Tarantino’s decision to stick with what he knows, to pepper his nostalgia piece with music about which he feels the same way, is infinitely more gratifying. The Coasters’ “Down in Mexico” encapsulates the intrigue and lawlessness of cinematic Mexico much more effectively than Rodriguez’s half-baked Latin rock. This is just as much because of the crackle of Death Proof OST‘s transfer, its AM radio distance, as it is because of its subject matter. Leave it to a connoisseur like Tarantino to pick songs that outdo a custom-made and highly detailed score. Even instrumental tracks like Eddie Beram’s “Riot in Thunder Alley” is pure surf-rock, drag-racing perfection in two minutes, quickly outstripping Rodriguez’s digitally-enabled hallelujahs to self-reliance.

Like the movie, the album’s best moment is saved for last: April March’s performance of the perfect “Chick Magnet.” As with everything else on Death Proof, under the song’s candy-coated exterior lies an undertone of dread and violence. “Oh how your bubble’s gonna burst / when you meet another nurse / she’ll be driving in a hearse / You’re gonna need a heap of glue / when they all catch up with you / and they cut you up in two.” Finally, March sings on the bridge “now your ears are ringing / the birds have stopped their singing,” which climaxes to a creepily adorable peak: “Everything is turning grey!” This two minute surf-rock number, with March’s inventive and adorable pronunciation (and like the myriad femme fatales of the movie itself), hides death and murder behind its sex and stereotype. That “Chick Magnet” was co-written by cult figure and bad boy Serge Gainsbourg lends yet another layer of inadvertent allegory to the notion of Death Proof as mastermind Tarantino’s gender flick.

Superficially, Death Proof conforms to any soundtrack’s stilted potential—vocal takes intended to be funny rather than representative of the flick from which they’ve been clipped, the unavoidable inconsistency of a mix diverse enough to mix glam like T. Rex with Smith—but underneath, it’s as subtle and discussion-provoking as the film itself. So, maybe, Tarantino box set? It’s the closest most of us fans would get to rifling through his record collection, and it’s the fantasy of doing that that has many of us coming back to see what the man has planned next.