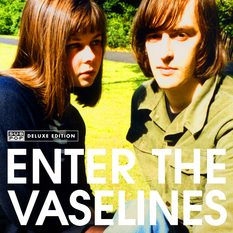 It’s tempting to start a review of Sub Pop’s lush, loving new Vaselines retrospective with some comments on Kurt Cobain’s role in their popularity—ruminations on his early embrace of Earth and the Butthole Surfers and the Pixies and his overwhelmingly astute critical perspective on his own band—but it’d be better and fairer to start with “Son of a Gun,” just like the retrospective does, just like the band did. Because “Son of a Gun,” the first song on the Vaselines’ first EP and so the first one here, is one of the best songs ever: a swirling juggernaut of blue sky sentimentality delivered in thin fair melodies over an infinite snare crack, a field of strums sprouting bottle rockets of counter-melodies like grass. It provides more reasons to enjoy the sound of a guitar than most music of this decade combined. I’m so for real right now.

So it’s with a large caveat that I note to Vaselines newcomers that nothing else on Enter The Vaselines approaches “Son of a Gun,” because pretty much nothing else approaches that song ever, right. But like, say, Underground Kingz (2007) without “International Player’s Anthem,” there’s still a wealth here to love. No wonder Cobain—really, an uberfan—loved this band! The Vaselines are a music nerd’s Platonic ideal: a flashfire of beautiful pop music, simple and elegant and sometimes sad, sometimes lovely, sometimes sardonic, shot through with handsome boy/girl melodies delivered via a handsome boy/girl couple, dirty and sweet in equal measure like fucking a longtime crush. Enter The Vaselines is equal parts Cramps and Velvet Underground but lit from within by an obsession with this contrast between these two voices, male and female.

The band hashed this gender clash out in itchy choruses and clenched-fist climaxes. The first disc collects the band’s two EPs and solitary full-length and rewardingly traces a traditional trajectory. If one tiptoes past the titanic opening track, the first EP was interesting if peurile, while Dying For It introduced promising sonic variety but little cohesion. The full-length, however, was fully formed. On Dum Dum the kicky fun of EP tracks like “Rory Rides Me Raw” and “Dying For It” found itself smelted into the blissed-out pop rush of “Teenage Superstars” and “Son of a Gun,” producing a lo-fi, high-reward thrush of a record. Sub Pop previously collected this discography on 1995’s The Way of the Vaselines, and though it’s been remastered here the sonic fidelity remains the same blend of plush studio embellishments and busted amp scuzz. But it’s a long, rewarding listen: after the build of the two EPs Dum Dum delivers swampy atmosphere on “Dying For It” and “No Hope,” a clockwork freak-out on “Lovecraft,” the stomp of “Sex Sux” and “Oliver Twisted,” and so on. It’s an album so assured and yet, in its endearing way, slight that it instantly negates those who would bemoan the band’s premature termination. It is the sound of a band actualizing, but done simply and without repercussion. This is a good thing.

Disc two collects demos and live versions, all ephemera; the band sounds decidedly more Scottish and dreamy here, but little bears mention aside from “Rory Rides Me Raw”‘s live transformation from a catcall into a something moodier and more rewarding. Still, the odds and sods disc raises a strange hair on my neck: today, the bare band of disc two would be no-fi’ed to shit, with great squalls of careful/stupid feedback obscuring everything that makes disc one so perversely endearing. The rhetorical query whether or not the Vaselines could exist today—as a 7” found in a bin awaiting devotion—raises itself, and one realizes with finality that they could not. Nothing of this record demands our attention, and so, likely, it would receive none. (Even Bon Iver arrived with a backstory and a vocoder.) Without a pile of feedback, it would register as twee—I may hate it! It might arrive fussily obfuscated by proud dumb production, stamping its foot impatiently, a sort of MGMT to No Age’s Cut Copy. Or it might never reach anyone, lost in a slipstream somewhere in the outer blogosphere. I’m not bemoaning the changing modes of music’s dissemination, only noting that if nothing else Enter the Vaselines serves as a timely reminder of the old ways we found music: for Cobain, one dreams, as a record in a bin somewhere, and for the rest of us, a recommendation from a friend, a cassette loaned around like a dirty one-hitter. Here I note with a sigh that the CD packaging is very nice indeed.