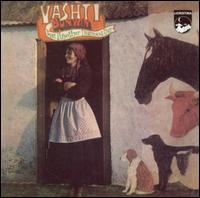 You guys should review Just Another Diamond Day and ramble on about Joanna Newsom’s voice and Devendra’s beard!

Before I ramble on about Joanna Newsom’s voice and Devandra’s beard, let’s set one thing straight. Just Another Diamond Day is—Vashti got it half right—just another average folk album. It has no defining characteristics whatsoever to distinguish it from the work of contemporaries like Joni Mitchell, Joan Baez, Nico and Love. Those musicians were already doing the same sorts of things, and doing them album after album. As much as I love Animal Collective, their track record for endorsing artists is pretty poor; see if you can stomach new Paw Tracks band the Peppermints. (I’m going to guess you can’t, because their latest album, vaguely offensively titled Jesus Chryst, is sludgy, haphazard, and tuneless. Thanks, Panda Bear.)

OK, now that that’s out of way, let’s talk some beard. I had the chance to see Devandra’s facial hair first hand recently, and while not as egregious as Sam Beam’s or Will Oldham’s, Mr. Freak-Folk’s certainly has potential. It’s his hair that more than makes up for the beard’s shortcomings: long, thick, and well-groomed, it’s arguably the most luxuriant mane indie rock has seen in years. Banhart unleashed his rich brunette locks in a half-hour surprise performance at Arthurfest, having respectfully tyed it back during his earlier performance with Vetiver. Like Samson of old, he seemed to draw power from its presence. Guitar relinquished, he introduced one new song (“Long Haired Child,” perhaps?) as being about growing your hair out to stay warm in a very cold place. As soon as the band started playing, he leapt into a frenzy, waving his hands and clutching at the titular object. Banhart’s performing power threatens to grow along with his hair; let’s hope he never meets his modern-day Delilah.

Joanna Newsom’s voice has absolutely nothing to do with Vashti Bunyan—partially because Bunyan’s is too hazy and anonymous for comparison, and partially because Newsom is a dead ringer for Fran Drescher. All right, not quite as bad, but The Milk Eyed Mender was about as divisive as indie-rock got last year. Armed with a harp and little else, Newsom’s debut lived and died on the strength of that voice. I loved it. She reminds me of someone’s cute Yiddish grandmother, without the Yiddish or grandmother bits. Her music, delightfully silly as it is, carries a blue-toned undercurrent available only through that inexplicable voice. To recap: Vashti = boring, Devandra = ought to do Herbal Essences commercials, and Joanna = as cuddly and loveable as a puppy. A puppy with a really squawky voice.