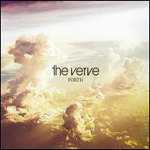 Without any prior knowledge of the Verve’s output, one could reasonably deduce what’s in store from the non-musical aesthetic elements of this package. First, there’s the cover: a breathtaking cloud formation with the sun upon it, it screams out the cool, mountain-peak epic vibe that lies within. Then, there’s the song titles: “Sit and Wonder,” “Valium Skies,” “Noise Epic,” “Numbness,” “Love Is Noise.” Each is an apt descriptor of their respective songs, all hinting at a fuzzy, druggy, reverb-filled search for some kind of higher redemptive feeling. Yup, it looks like we’ve got the old Verve back, just the way they were.

Well, not entirely. It’s been ten years and, as I’ve previously mentioned, a number of other acts have found success with their own versions of the Verve’s epic Britpop. Yet, try as they might, neither Coldplay nor Keane nor (shudder) Snow Patrol can approach the kind of masterful whirl of stoned confusion and confession that was the first Verve album, A Storm In Heaven (1993). No, the Verve that the noughties crop of post-Britpoppers are focusing on is the band that wrote “A Northern Soul,” and especially chart-topping smash “Bittersweet Symphony.” But it’s the Verve from A Storm In Heaven—who can’t resist complementing pop hooks with washed out guitar fuzz—which distinguishes (and justifies) Forth, an uneven but still welcome return.

The best songs on Forth focus on the crucial element that made all those Richard Ashcroft solo releases so comparatively dull: Nick McCabe’s shimmering guitar licks. “Judas,” with its effervescent rain of ambient six-string staccatos, is prime Verve beauty. Even when things heat up a bit for the chorus and bridge passageways, McCabe holds back from overdone rock theatrics, preferring instead to thicken the layer of cerebral licks and loops running circles around the listener. “You know the trip has just begun,” chants Ashcroft, drowning out in U2-on-ecstasy reverberations. “Valium Skies,” another beautiful drifter, features wide and distant delayed ax trills over weepy strings, while Ashcroft embraces his anthropomorphized narcotic lover, because “she don’t mind when I cry.”

Lyrically, Forth unfortunately features some of Ashcroft’s biggest duds yet. He hits up all the usual suspects: desperately reaching out for light, doors opened, doors closed, life and love promise more pain than joy, drugs once again not working, etc. Ashcroft holds a vital place in the dynamics of the Verve, but his vocals work best when they’re vague wails with layers of reverb; in essence, the more his voice is like another instrument the better. A song like “Numbness” takes its title to an annoying extreme, as Ashcroft incessantly wails “numbness on my brain!” over an already frustrating enough instrumental passage. It takes a more gifted “tortured soul” figure to tell these kinds of anguished tales over and over again, and Ashcroft is no Jason Pierce. Then again, Ashcroft pulls off pretty decent Spiritualized nod with the eight-minute rave up “Noise Epic.” Halfway through the song collapses into a passage of ambient beauty in which Ashcroft’s voice once again assumes the textural role it occupied for much of A Storm In Heaven.

If nothing else, Forth is a decent reminder of what makes the Verve great. “Love Is Noise” is a perfect comeback single, and there are moments here to make even the most jaded of listeners submit to ’90s Brit rock nostalgia. More than ever the band has a tendency toward grandstanding and overdoing some of the instrumental passages; not every song needs to have an orchestral string arrangement, guys. Yet for all the frustration of misfires like “Sit and Wonder” or “Numbness,” there’s plenty of subtlety-free expressions of ecstasy, and I’ll take that over half-baked irony any day.