Other Records by Vetiver 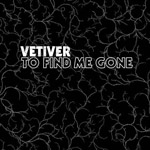 To Find Me Gone

Everyone writes about Vetiver frontman Andy Cabic’s association with Devendra Banhart (Cabic is the guitarist for Banhart’s band, Hairy Fairy, while Banhart has been a part of both Vetiver records) and his “acid folk” movement. If he has tired of the comparisons and name-drops, this review will provide a welcome reprieve. Starting now.

Aside from chance encounters with a handful of freakier artists (predominately Newsom), I’ve stayed clear of the entire sub-genre. Regardless, if you’re like me and, when faced with the prospect of either listening to an entire Joanna Newsom album, or revisiting in full-blush one of the most awkward moments of your adolescence (for example: being asked to assist with a 75 year-old public health nurse’s lecture on heavy petting, hypothetically), you’d happily wear the “bad touch zone” apron, Vetiver will still stand a chance with you. The band’s sound at this point seems to have little to do with “freak folk,” despite both Banhart and Espers drummer Otto Hauser shedding their whiskers on a number of songs.

Refusing to get its freak on, To Find Me Gone leads more towards melodic folk/pop music from the past fifty years than crayola images of unicorn threesomes. We get various echoes of Simon and Garfunkel (the opening of “Maureen”), Nick Drake (the repetitive guitar and hushed vocals on “No One Word”), The Everly Brothers (the harmonies on the upbeat, ‘50s-driven “Won’t Be Me”), and even Neil Diamond (the “Sweet Caroline”-esque, feel-good progression leading up to the chorus -- well, to what would be a chorus if there were one -- on “I Know No Pardon”) infused into what results in a very rewarding, if standard, “folk” album.

Instead of sounding wholly derivative, however, Vetiver simply sound like they mean it, and aren’t afraid to let one chord progress into the expected next, generating a mood of comfort rather than an atmosphere designed to jar. Cabic’s lyrics follow suit, sounding familiar, but putting new spins on dirt-road-worn imagery: “Did I lose my way/ Or did I just play/ the cards the way the dealer gave them to me?” The album opens with “Been So Long,” which, after a minute and a half of instrumental drone, blooms into tribal percussion and some of the most stunning and expansive harmonies you’re likely to hear on this side of Diane Cluck.

But not nearly as spooky, and that will be the selling point for some. If you’re inclined to pre-emptively cringe at Vetiver for the freak-folk association, don’t. To Find Me Gone shows a band as adept at bucking trends as they are at invoking tradition.