At the Cut
1. Coward
2. When the Bottom Fell Out
3. Chinaberry Tree
4. Chain
5. We Hovered with Short Wings
6. Philip Guston
7. Concord Country Jubilee
8. Flirted with You All my Life
9. It is What It is
10. Granny 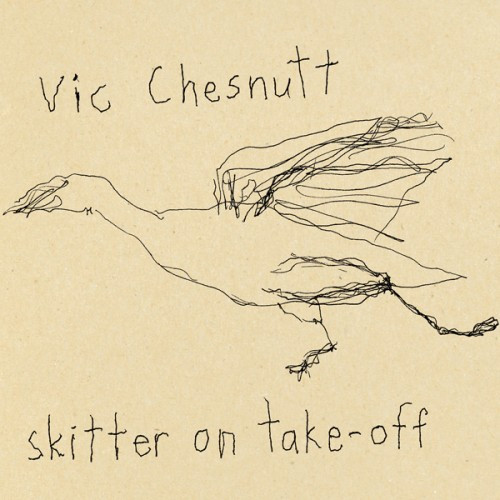 Skitter on Take-Off / At the Cut

Vic Chesnutt saw a darkness. That much is clear on the songwriter’s best albums, specifically Drunk (1993) and Is the Actor Happy? (1994); “A fat hungry English crow / picking at a carcass / the gravity of the situation / is hard to focus and harness,” he sang on the latter album’s “The Gravity of the Situation.” Even the comparably more cheerful West of Rome (1991) found the Athens, Georgia native declaring that “the world is a sponge,” finding a chord pattern so desolate the listener wonders if the man’s very guitar would itself absorb him, granting the singer’s wish to soon be silent. In that light, Chesnutt’s alleged suicide this past Christmas Eve feels inexorable, like he’s been warming up for it his entire career.

So then why is his music so funny? “The Gravity of the Situation” is a bleak tune, but it contains such slippery imagery like “The gravity of the situation / is why our old thought bubbles sank.” Yes: cartoon thought bubbles. This would fall flat in anyone else’s hands, but Chesnutt had a voice that let him get away with things that most singers couldn’t. Rangy and yowling, like a feral cat, his throat croaked out lines that allowed him to precisely chronicle his depression without, very often, falling prey to his disease’s attendant mawkishness. One almost doesn’t take him seriously. That’s why the aforementioned lyric works: it’s easy to imagine another writer, perhaps young and widely read, offering this as sober evidence of his life’s failure, which would make the autobiographical specificity of his dinner plans with Bill Lowery (as it occurs in a later stanza) doubly grating. One gets the impression that Chesnutt is merely meandering, bullshitting with the listener—mortality musing as shaggy dog story—which allows the home truth of the song to hit in different receptors of the brain. (This is partly why the 1994 tribute album Sweet Relief II was so frustrating. Chesnutt wrote a lot of things, but he never did hits, and the likes of Hootie and the Blowfish stripped his songs of the very thing that made them tick: personality.)

Nowhere is this more apparent than “Worst Friend,” the penultimate song from Skitter on Take-Off. Over a ghostly, soporific tempo, he lists various ne’er do wells in typically plain-spoken, vulgar language: “You’ve got one friend who you call the retard / You’ve got one friend who always wants to smoke in your house / And one friend who secretly likes to get peed on,” he takes a breath, “sexually.” On and on it goes, the friend who placed his genitals on “TV’s actual Wheel of Fortune” (presumably this means the wheel), the friend who made a pass at the subject, the friend at whom the subject would like to take a pass, and the friend who’s really into feet (he takes a breath, “sexually”). “But I’m the worst friend in the world,” he warbles in the chorus, and one expects some breathtaking display of debauchery to prove it. This is what he gives: “When you are down / I can never be found.” The simplicity of this stanza, the only rhyme in the song, is what makes it staggering, and says innumerable things about guilt, friendship, trust, and secrecy by saying very little. It also makes the lingering ellipses of the song’s final lyric, “And one friend [with] whom you’re not even on speaking terms,” more intriguing.

It’s a powerhouse in the canon, and if none of the other songs on Skitter on Take-Off are as good, it’s only because few songs ever are. As it is, the album is strong by any metric. It begins with an apocalyptic vision in “Feast in the Time of Plague” (“You were a beautiful pig”), and segues seamlessly into the relationship travelogue “Unpacking My Suitcase” (which features the beautifully Chesnutt-ian simile of a squirrel, “I was saving little chunks of your sweet, sweet goodness and squirreling them away […] for the lonely winter” but by song’s end he puffs out his cheeks to pack it all in) and goes on to describe everything from cell-division (“Rips in the Fabric”), to a local Calamity Jane (“Society Sue”) and Dick Cheney (“Dick Cheney”). Chesnutt and his nylon-string guitar are front and center, accompanied by what sounds like a pick-up band learning the material for the first time. The album is conceived and executed as a spare, brisk counterpoint to his heavily orchestrated collaborations with Gem Cohen and members of Godspeed You! Black Emperor. Truthfully, though, many of these songs would fit right at home in those two records, and the mind wonders what could have been made of the quasi-blues like fills in “Feast in the Time of Plague,” or the lilting, odd meter jazz riff that punctuates “Dimples.”

While Skitter on Take-Off is a great album, At the Cut is a brilliant one. His second album with the aforementioned Cohen and company (also featuring ex-Fugazi/Rites of Spring guitarist Guy Picciotto) finds the group on surer footing than the mighty North Star Deserter (2007). The parties know each other here. The allegro, minor-key melody that Chesnutt writes into “Coward” is right in their wheelhouse (it’s very reminiscent of the main theme of Godspeed’s “Sad Mafioso”), and the band responds with a widescreen, dynamic performance. They, in turn, throw splashes of color on Chesnutt’s material that was unthinkable on his prior albums. “Chinaberry Tree” has a shimmering, strobe-like quality; an upright piano places “Chain” somewhere between a saloon and a New Orleans funeral parade; “Philip Guston” dials in righteous Led Zeppelin; the now-heartbreaking “Flirted with You All My Life” even cooks, coming off like nothing so much as the darker corners of _Blonde on Blonde_(1966). The English language doesn’t contain the stuff to do justice to the ghostly, damned apparitions that run riot through “We Hovered with Short Wings,” but the journalist can tell you that jazz brushes and modal chords keep the band right with Chesnutt and his otherworldly falsetto.

“All these songs about death,” the songwriter cracked to his audience during his last New York show. At the Cut was prematurely billed as Chesnutt’s victory lap around his demons; “Flirted with You All My Life” was described as “a break-up song with death.” Hindsight reveals that the indecisiveness in that song’s chorus—“Oh death / I’m ready / I’m not ready”—was more than a lyrical flourish. “When the Bottom Fell Out” is an unaccompanied image of a leap from a tall building, the singer telling his audience that “Observers heard me shout / it’s been good to know you / But when I finally smash into that verdant grass / I’ll say it’s been pretty great going.” The “Chinaberry Tree” is an object which Chesnutt hacks to pieces “with a force heretofore unknown to me,” and it’s hard to say what this tree symbolizes—life itself or the depression which loomed like a volcano throughout the man’s life. “Like the invisible man directing traffic,” he sings during “It is What It is,” “I’d be ineffective no matter how enthusiastic.” The line is funny, but while he never tells us what he considers as easy as directing traffic, the way he delivers “appearance is everything […] in civilized society” suggests the perpetual outsider, especially later when he declares himself to be The Phantom of the Opera.

“I’m not exactly crowing my greater glory,” he says in that song, and so it’s left to us. This writer lost touch with the turns in Chesnutt’s career over the last several years, and I’m poorer for it (to say nothing of my year-end list, which, absent of At the Cut in the top five, now seems deeply ignorant). Work this literate and sophisticated—this weird, funny, and heartbreaking—should always be on the collective front burner. If the circumstances of his death are unsurprising, it should be equally so to learn that he tried his hand at fiction several times, and failed. It could be no other way: wry, bellicose, bratty, self-absorbed, drunk, Vic Chesnutt was a brilliant songwriter, but he was no omniscient novelist. He was, rather, a character. And characters sing.