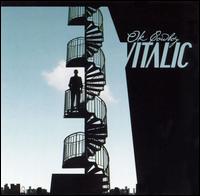 Two disappointing follow-ups from our house favorites (get it?) –-- the hard-fallen Daft Punk and plateau-reaching Ellen Allien --– and the next euro-DJ on the set list is Pascal Arbez, employing the bass-pump to try and revive the flatlining dance floor. Will he make you put down your drink and move?

Arbez, like so many semi-celebrity house artistes, has his own ridiculous mythology and all, but since those haven’t translated into vital sets for the other powerhouses, let’s ignore his alleged male prostitution days and see if he can’t vivify the body with some interesting and visceral va-voom. He’s got the energy and pure floor energy of Daft Punk, and the technical chops of Allien, after all.

Turns out that OK Cowboy is a good deal like the better house sets you’ll hear at a take-your-pick hot-house European club: pretty exhilarating, though once you’re licking the dry salt off your partner’s cheek you realize that only parts of it are truly inspiring, though all of it was pretty hottt.

So let’s use a well-worn metaphor: start with the highs and get to the comedowns later. Arbez’s (sampled) guitar-revved tracks are pretty fucking incinerating --– “My Friend Dario” and the city-burner “Newman” wreak all kinds of havoc on the drugged psyche and even the sober one. While “Dario” really only relies on one engulfing riff to carry the chorus-day (though check those killer snare peppers), “Newman”’s menacing progression will crash your car from the force of your shaking, should you play it on the road. “Newman,” almost unarguably the best of the bunch, could turn whole autobahns into flaming wrecks as it burns through some downright nasty variations and then a shamelessly huge climax, but only after its hungry bridges trips its tension-wires and send the whole thing through the roof. “Poney 1” and “Poney 2,” already respected staples in a good house-gourmand’s diet, are brought out here in all of their steadily intensifying power, though “Poney 2’s” deeper level of layering complexity, sturdier melodic chops, and sheer power clearly identify it as the better horse to ride.

“Repair Machines,” meanwhile, does far better work with vocal samples than tracks like “Dario,” for which the vocals are little more than intro-decoration. “Repair Machines” will use its shattering and then rebuilding vocal sample as a melodic jumping point as it launches into intertwining synth flows that juxtapose the vocals’ tone against a harsher acid background. Of course, it erupts into a dizzying rush, to everyone’s perspiring satisfaction. It may even be as world-eating as “Newman.”

Arbez’s slower numbers, (sublimely beautiful “The Past” jerks the tears as well as “Newman” jerks the booty) are nice little interludes to separate his bang-on singles. But despite their quality, their placement in a set that spends most of its time stampeding from speaker to speaker is something of a buzz-kill; it’s the kind of move that activates the “this is a complete album” signal, but the singles hopelessly overpower the sweet songs.

Same goes for the cute intro “Polkamatic” and “Wooo” (are those organs or guitars... or synths?). They’re mood-lightening dawdles, but the utter threatening power of a number of Arbez’s other tracks render them too facile by comparison. If Arbez had the lighter touch of those daft punks, they would work just beautifully along side some feel-good pounders. But Arbez’s edge is of a darker cast, so even the remotest bit of twee makes the atmospheric direction of OK Cowboy shudder.

And then there are comparative duds. “La Rock 01” uses a dirty synth line to propel it, but its reiteration over interesting percussion and nothing else leaves it in sketch-territory. “Trahison” has its pretty moments, but bar after bar of repeated loops slows its already sluggish melody to a near stand-still. “U and I” is pure inoffensive loop-warp, on a flimsy beat and with minimal interesting development, an unfortunate closer to an intermittently obliterating set. It may not leave the roused kids flatlining again, but strung-out is the best you’re getting.

At bottom, Arbez can’t really cloak the fact of his shit-kicking singles in the fiction of an album. All the token “album” moves --– the slow songs, the interludes, the intro --– fall flat before the stand-alone power of Arbez’s superior club-bangers. It’s better than OK, cowboy, but throw ten “Newman” or “Repair Machines” tracks together, and you’ll have every right to title the next one Stellar Space Boy.