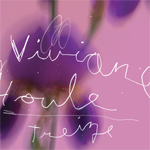 Forget “Song Not For You,” this whole record is not for us. By “us” I mean the 99% of us who don’t have a deep and studied appreciation for out music contextually and historically and academically and politically and etcetera, etcetera. I don’t have a Pauline Oliveros poster on my wall. I couldn’t, I wouldn’t know where to cop it. Mark Abraham, my supremely tasteful colleague who I am nonetheless counterpointing when it comes to the record at hand, probably could. He could probably make himself a Pauline Oliveros poster because dude’s talented like that. Now, I have come to gain an appreciation for a fair amount of modern out, thanks in no small part to Mark. For instance, that Jessica Rylan record that Mark mentions in his Vivian Houle review Loved that shit. Top 50 of the decade, for sure. I guess my problem enters in where Mark states: “Houle sings, hums, scribbles, and nasals her way through a host of ambitious material, letting her voice frequently adopt the tenor of Jessica Rylan’s oscillators on Interior Designs as a method of communication.” Whether or not I fully agree with that statement, the response that comes to me when I actually listen to Houle retch a spew of stupendously silly sounds out of her mouth is “This is why people do this shit on instruments.”

Yes, it’s audacious and maybe even somewhat impressive the way Houle mimes or tries to find synergy with the often erratic contributions of each musician that accompanies her, track by track. I get that it’s a sort of free improv vocal response to what they’re doing. I do, I swear. Here’s the big fat but: because what Houle does sounds so ri-damn-diculous, it’s like an insult, a mockery of music, like saying, “Hey, free improv, guess what? You sound like someone just fucking around! And dying babies.” At various points Houle also sounds like: the Queen of Hearts jabberwockin’ (“Au Revas”); someone burping The Grudge (“A Little Storm”); nails on chalkboard interspersed with some kind of sick bovine creature eating thistles, vomiting, then chewing its cud (“Betters and Bads” and “Gratte-Moi Le Dos”); and scattered throughout the entire record are the sounds of Gollum having a seizure and/or Bjork being strangled.

Then you have the jazz poetry track “Molehill Mumps” that’s sort of Regina Spektor-on-serious-downers except there’s an extended passage where Houle tries to make her voice sound like it’s being manipulated to play backwards and you’re all “why? Fucking why?” The other jazz poetry tracks—which include “Quiet Eyes,” “Bells Hung in a Tree,” and the eye-rollingly titled “Finely Tuned is My Heart”—are album bright spots, I guess, but what’s it say about the rest when jazz poetry is a highlight? The brightest spots, really, are the unremarkable if solid drone tracks “It’s Not the Moon” (which I could only wish was an ode to the Death Star) and “Curve,” where Houle’s vocal presence is almost entirely sublimated into something tolerable. It makes you realize that this record could have been genuinely unsettling if Houle’s antics didn’t usually push things so far over the top that she jars you right out of the experience then jerks off in your ear.

It’s Houle’s vocal histrionics, though, that are the record’s signature element; it’s just unfortunate that that signature element comes off like the avant-garde equivalent of an annoying brat stomping mud through your kitchen and yelling rubbish at the top of their lungs, arms folded and face red as a beet. Does that likely make Treize in its form and aesthetic a fundamental, primal lashing out at the established music order? Yeah, sure. Do I care about that aspect enough to keep me from promptly purging this bile off my computer once my review is finished? Absolutely not. I guess there are a couple other questions to consider. Is this a bunch of nothingness presented self-importantly—intentionally so as to make satire of communication, language, hope of meaning, Houle’s own turtlenecked poetry? Or if not self-importantly than in silly fashion so as to deflate self-importance and allow us just to enjoy, um…what I’m not sure? But this thing sounds so dour, so bought into its own spasms, I tend to think that Houle really does believe in the nourishment and goodness of the murky piss she’s furtively splashing all over us with the shaky ladle of her throat. Which is a creepy enough sentiment in its own right to make this good Halloween party music, especially if it’s the kind of party where you’d invite Lars von Trier and Miranda July. But I don’t throw Halloween parties. I just watch The Thing.

So, to summarize: the benefit of the doubt here is that Treize is intentionally ridiculous. The doubt is that it’s serious. Or maybe it’s seriously ridiculous. Depending on how you choose to look at it, you can either find yourself laughing at Houle about two minutes into opener “Mandrake” or you can want to punch yourself in the face. You can’t really laugh with Houle because this record would seem to indicate that her laugh is inhuman and if you believe she is totally serious and you also want to take this record totally seriously, by all means, punch yourself in the face. Treize is one of those divisive records that places high priority on cognitive dissonance, where any adverse reactions are met and fondled so intimately by the artist’s concept as to render most critical discourse down to the level of a chicken-or-the-egg argument. So, obviously, there’s some craft and some smarts at play here; it’s not like the emperor has no clothes. It’s more like the emperor’s wearing a cleverly crafted skin-tight bodysuit with a filthy, ugly nude image painted on, the only seeming purpose of which for an audience of “us,” the out-illiterate and -dilettantes, would be to make us squirm, perhaps titter, and generally feel awkward. Maybe that’s the point. Maybe as a critic I’m supposed to revel in that kind of devilry. So if I were to give Treize the benefit of the doubt and call it an elaborate joke, and if I were much of one for jokes, then I might be quite impressed by the moribund perversity of the whole exercise.

Thing is, I’m not much of one for jokes. I like music better.