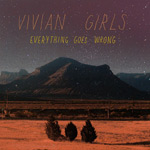 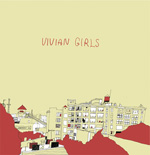 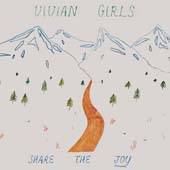 “I don’t wanna be like the other girls,” Cassie Ramone sings flatly in Share the Joy‘s six-minute opener, “I don’t wanna try, try, try like the other girls.” Since their lo-fi, sixties-inspired debut in 2008, Vivian Girls have seen their chosen genre flooded by the likes of Dum Dum Girls, Best Coast, and others. In light of this, as well as a disappointing and rushed sophomore effort in 2009, the Girls seem to have stepped back to reevaluate their sound, attempting to put a finger on what sets them apart from all those shoegaze-y girl groups out there. Their latest, Share the Joy, marks an evolution into a sharper, brighter, less slapdash approach. It’s a wise move—the trio still trades in sixties-style pop, but with Ramone’s vocals taking center stage, it’s becoming edgier, more present, and more their own.

“The Other Girls” begins the album by instantly challenging listener expectations: it’s long. Featuring repeating lyrical threads, chugging guitar, and a lengthy (though unfortunately somewhat stilted) guitar solo, it’s distinctly more epic than anything the Vivian Girls have previously attempted. The most immediately gratifying change is the vocal production: Ramone has a sardonic, occasionally cartoonish voice that adds a great deal of personality to the proceedings. Her tone recalls Liz Phair (who easily could and should be making music like this now, instead of rapping over Bhangra beats) and allows us to feel shifts in mood that previous Vivian Girls recordings may have buried in guitar hiss. New drummer Fiona Campbell’s work is also in the foreground, providing an important source of energy that doesn’t let up throughout the record.

Vivian Girls are known for their ’60s girl group sound, and Share the Joy still has it in spades, with mixed results on tracks like “I Heard You Say,” “Dance (If You Wanna),” and “Take It as It Comes.” They’re thankfully not always content, however, to simply replicate those cutesy melodies, a la She & Him. Their version of the 1960s is charmingly offbeat, with a dense rock ’n’ roll sound—think more France Gall than the Chiffons. Gall’s manic style can be heard throughout this record, in its abrupt tempo changes and steamroller harmonies, particularly on single “I Heard You Say.” The earworm “Dance (If You Wanna)” isn’t as interesting but fun nonetheless. If I could lose one track from Share the Joy, however, it would be “Take It as It Comes,” a sugary-silly throwback song in which Ramone doles out advice to her bandmates on dating a guy named Johnny. “What if he goes on a date with another girl?” one of the Girls asks in a simpering tone. The song itself is very Zooey Deschanel, winking and cutesy and tired. The fluffy pre-song banter indicates it’s supposed to be appreciated ironically, or in a modern context, but in reality it’s just kind of lazy.

The album is more successful when the Girls tackle darker material, such as a cover of Green on Red’s murder yarn “Sixteen Ways” or the moody “Lake House.” “Trying to Pretend” is also a welcome treat, with its fast-paced drumming and Modern Lovers-style, half-spoken chorus. Vivian Girls are at their most interesting when they’re mixing up genres, which they seem to do increasingly as the album draws to a close, building to the finale “Light in Your Eyes,” which combines the record’s sonic elements into an epic stew.

Share the Joy represents growth for Vivian Girls, though they’re not totally there yet. Clearly, they’re at their best when they’re not retreating into the safe, cute nouveau girl group pose so many bands are adopting these days. Cassie Ramone, rightfully, doesn’t “wanna be like the other girls,” and that’s becoming more evident in the band’s work. One hopes they’ll eventually leave their crutch behind and venture fully into new territory. Retro reproductions like “Take It as It Comes,” after all, are amateur stuff. I want more for the Vivian Girls—especially now that they’re showing what they’re capable of.