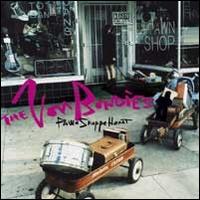 Perhaps the fact that Jack White kicked the shit out of lead man Jason Stollsteimer (who knew White was such a scrapper?), not to mention Q giving it a good deal of press, may have something to do with the recognition that they've gotten. But most likely it's probably on the strength of the Bondies' rip-roaring rockers.

As with nearly every breakout garage group, there's bound to be some hyperbole involved, and the Bondies are no exception; descriptions like "stepping out of White's shadow" crop up in many a publication, and with them the extolment of the new garage-prophets. Well, the Bondies are no garage-prophets. But they do have a ferocious rhythm section, caterwauling vocals, blistering guitars, and a cool male-female vocal dualism that serves them well enough. Their songwriting, on the other hand, isn't phenomenal, but with the buzzsaw viciousness and brutal intensity of their sound, the sin isn't unforgivable.

The Von Bondies don't necessarily pack in the hooks, but the ones they do crank out will blast through your chest and double you over; the particularly nasty, raucous, rough riffs on album highlight "Broken Man" and face-smashing scenester-nod "Been Swank," burn holes in your eardrums and then explode inside your brain, moving the motor skills to incoherent thrashing and air-guitaring. Most importantly, the Bondies keep it short and sweet; they know their hooks can't really outlast three minutes, and work within those limits. The effect is a dominating one. If you don't submit to the careening chords of "C'mon, C'mon," with its wheeling, soaring chorus, you'll be subdued by the whiplash of "Been Swank" for certain.

In fact, the pacing of the album up to the halfway point is perfect; one gut-tearing tune after another barks away with relentless aggressive power. The chorus-heavy "No Regrets," with guitars that barely stay under control, leads into "Broken Man," the bridge of which is absolutely obliterated by a landslide of rabid drumming, which leads into "C'mon, C'mon," etc. The first sign of songwriting weakness crops up in "Tell Me What You See," its forgettable hook accompanied by an equally forgettable chorus shared by Stollsteimer and bassist Carrie Smith. Smith's contributions in particular are sometimes questionable; her Kim Deal-esque cool falls a little flat, and doesn't do "Not That Social" any serious good; neither does the song's relative hooklessness, as it relies on an intermittent single guitar hook to carry its sagging weight. It's from "Not That Social" that the quality of Pawn Shoppe Heart gets a bit patchy; the drumming is almost worthy of Hella comparisons (which means it's really fucking good), but too much guitar buzzsawing and noodling goes on, and the song-writing suffers a bit. "Crawl Through the Dark" is perhaps the best example of the sometimes frustrating dualism with single, beaten guitar chords and unforgivingly brash guitar hooks. Highlights like "Tenderness," with its artful soloing, phenomenal hook, and expert spacing make up for latter-half missteps, but the feeling I can't help avoiding is that those missteps could've been avoided extremely easily with just a bit more attention to detail.

The production, however, is uniformly excellent. It retains a gritty edge while thankfully making use of the benefits of the compact disc -- that is, this stuff doesn't sound like old Stooges tapes, and really couldn't be compared to Iggy and friends; it's more hard pop than garage or punk. And while purists might question Jerry Harrison's production decisions, he keeps the edges clean where the need to be, and the guitars as filthy as befits the pummeling nature of the Bondies.

What all this makes for is a somewhat inconsistent, but ragingly energetic rollick of an album, worthy of rocketing the Bondies out of obscurity and into the public eye, but not worthy of "heir to" titles. Not yet. They're already pretty tight, but could get tighter, and with some polish (not production-wise, but songwriting wise), they could shine as the sharpest diamond in the floods of garage acts all craning for the big time. Best of all, for this being their big-label debut, they've kept their ethic intact; Pawn Shoppe Heart is, if nothing else, at once uncompromising and promising. Stollsteimer may have gotten his ass whupped by White, but in time it could be Mr. Ball and Biscuit who finds himself with the rug taken out from under him by the guy who's mashed up face was White's doing. Ain't the revenge of success great.