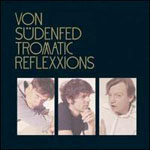 Plus ça change, plus c'est la même chose. No aphorism has ever fit Mark E. Smith so snugly. The Fall, despite a revolving door staffing policy, has managed to plough a narrow furrow that rarely deviates from their hit formula of drunk diatribe and irritable garage rock. In the process, the Fall sound like a million bands and like no other. This is mostly due to Mark E. Smith's very singular delivery; he dominates the speakers as forcefully as he dominates the creative output of his band. His pig-headedness is paying dividends: last year, after a battle with alcholism, he returned replenished and full of vigour with the tightest Fall album in ages.

After what seemed like a one-off 12 inch in 2004, it may be surprising to see him taking a full-length detour to collaborate with electronica luminaries Jan St Werner and Andi Toma of Mouse On Mars. The duo, it could be said, are an anti-Fall, effortlessly straddling different sounds and noises to consistently develop their music; their excursions have led them through dub, psychedelia, jazz, and rock. Because, a full length? The original 12 inch sounded like Smith had stumbled into the studio and threw up over the microphone.

As soon as opener "Fledermaus Can't Get It" barges in, all doubts are swept away. It pushes LCD Soundystem's "Losing My Edge" onto the floor; it kicks sand in the face of Murphy's sneer and dares you to try to press the stop button. Smith is on fire; he sounds focussed and angry despite the fact that his vocals are muffled throughout. On rougher takes like the dubstep of "Family Feud" and the skanked "Serious Brainskin" Smith's voice is a natural accompaniment to Mouse on Mars' beautiful mess. He mangles his language and his delivery; he self-edits, imitates EQing; he slurs, growls, and spits. Mouse On Mars match his warped viewpoint, blurring, chopping, razing, and deconstructing genres around him including the blissed-out Graceland (1986)-esque ballad "Dearest Friends."

There are moments when the lyrics punch through like a snatched memory of a blurry drug-fuelled night. On the grimy two-step of "Flooded" he admonishes a rival trying to take his DJ spot with criticisms of incontinence. On the future-bluegrass of "Chicken Yiamas" he's obsessed with the intricacies of boiling a chicken; his musings end where he screams like a man who wears tin foil hats and hangs around at bus-stops scaring away pigeons. The truly shocking moment on the album, however, is certainly "The Rhinohead"; Von open the track like the Talking Heads' "Thank You For Sending Me An Angel" before morphing the sound to foreground the most tender melody of Smith's career.

Save for the field recording "Jbak Lois Lane," Tromatic Reflexxions is a roaring success for both parties, blowing the fresh air of invention through an increasingly tribalist scene. Mouse On Mars manage to dip their toes into multiple dance genres and beyond without missing a step; Smith manages to intrigue, educate, and entertain, sounding more invigorating and adventurous than many artists half his age in the current musical climate. Like I said: the more things change, the more they stay the same.