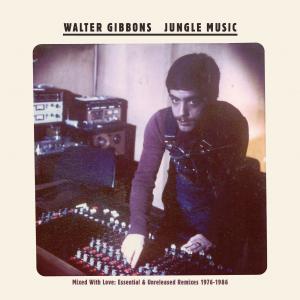 Taken with the overlapping, complementary The World of Arthur Russell (2004) compilation, Jungle Music presents an alternate universe where disco, hip-hop, and indie rock were never separate, never evolved from something to something else, never had any growing pains. In Walter Gibbons’ and Russell’s utopian vision, it was all always there, preternaturally funky and naturally composed, delicately improvised. Like a two-man relay team unsure of who should be the anchor, Russell reaches towards disco from jazz, via the foundations of melancholic cello pieces like “A Little Lost,” while Gibbons—solely a DJ, unlike Russell, and often credited with setting the foundations for house, especially Chicago’s experimental side—takes the layers and harmonies of preexisting funk and disco to a new level by way of the remix, investing the relentlessly upbeat with more emotional depth and shades of darker soul.

During the late ’70s and early ’80s, when Gibbons’ and Russell’s disco deconstructions enjoyed something of a New York City heyday, remixes like that of Double Exposure’s “Ten Percent,” Gibbons’ first commercially available 12” and something of a legendary release, could make perfect sense: funk guitar and disco rhythms stretched into an extended coke-colored sunset. But more importantly, such repetition can be traced to house music, as well as to the root of rudimentary “mega mixes” at the end of golden age rap albums or even to some strains of garage. This all congeals into the character of Gibbons as carrying a casual omniscience over his beat-mixing, one that makes his subsequent conversion to evangelical Christianity and then early death from AIDS seem both improbably tragic and key in rendering the idea of musical epochs, at least those in which he had a toe, meaningless. The way Gibbons can set Sandy Mercer’s ’60s gospel vocals on “You Are My Love” afloat above a riff on the bass line for “Silly Love Songs,” then lets it rush ashore, first over her vocal improvisations, then over a naturally minimalistic groove, the chorus meanwhile gradually returning, allows the dance jam to feel both brand new and outside of time altogether. This isn’t just record spinning—it’s DJ as bandleader, as captain, as maestro.

The best and most generally indicative track of Gibbons’ mettle is Strafe’s “Set It Off,” a nine minute epic dating from 1984 that remains the lone in-print memorial of the eponymous singer’s short, 12” centric career. The coolly skipping drum machine and Strafe’s multitracked vocals anticipate not only the recent 808 renaissance—its stark synths are all proto-Neptunes—but everything from Romanthony’s work with Daft Punk to the Ying Yang Twins’ “Wait (The Whisper Song).” Enter funky guitar beneath handclaps and soft siren noises, gripping harmonies on the chorus, and subtle Bernie-Worrell-type wooshes at the end. That he can combine Gibbons’ politesse (“Set it off, I suggest, y’all,” he memorably croons) with dirty dancefloor filler, all in a song that would fit in any contemporary context, is improbable. And yet, that kind of boundary-pushing crowd-pleasing is here in spades, rendered more vivid by the relative anonymity of the artists on hand.

Appropriately, for an album which is all about the timelessness of the obscure rather than the social high of the successful, the hits are less interesting than the misses. The biggest name here sounds the most generic, with Gladys Knight’s “It’s A Better Than Good Time”—her first solo single—remaining a flavorless piece of over-orchestrated disco product. But rebirthed indie stars like Russell, Bettye LaVette, and Dinosaur L (whose “Go Bang” is a jazz-disco highlight both here and on The World of Arthur Russell) are as invigorating as ever, and the unknowns shine the brightest, like the campy, ambitious movie-music-meets-disco of the Salsoul Orchestra, or Jakki’s dense, multi-part “Sun… Sun… Sun…,” whose solar echoes probably had some kind of influence on Caribou’s similarly named single.

There’s a curious innocence that comes with anonymity, and the way Arts &Craft’s sweet R&B harmonies hover over unending, reverbed-out bongos on “I’ve Been Searching” detach them from any particular time period. It could be anything from a psychedelic girl group album cut to a throwback indie club anthem, and yet has no obvious ambitions of sustainability. At its best, Jungle Music is able to sustain that kind of transcendent detachment, and—opposed to Russell, whose music radiates quiet tragedy—make it groove in a blissful way, dance music truly guaranteed to stand the test of time.