1. We Love Machine
2. One Bright Night
3. Only Love
4. BodyMotion
5. Pleasure Control
6. Future Perfect
7. Survival
8. Ultraviolet
9. Tales of the Rabid Monk
10. Surrender
11. The Doors Are Where the Windows Should Be
12. Tierra Del Fuego 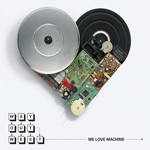 Fifteen years is a long time in dance music. It’s 14.99942 years longer than the average Ecstasy kick, half the length of an original Orb EP, and fifteen times the lifespan of your typical pairing of DJs. The precedent, you see, at entry level progressive house team-ups runs something like this: meet at venue launch party, go halves on bargain MDMA, collaborate, touch the charts, divorce. Custody’s not important, because you only ever existed to the trainspotters, and when your one-hit floor-filler crops up on some future car compilation…well, you cringe but it helps feed the mortgage.

I can only name four dance acts who haven’t got a mortgage and Way Out West is one of them. DJs Nick Warren and Jody Wisternoff, decorated veterans of the club scene, take their cues from instrument-players as well as deck-heads—they’re both keen believers of the Paul Buchanan school of recording (release album, rapturous applause, undercover for seven years, go to 10). 2004 saw their last brush with the public when they unveiled Don’t Look Now, their house breaks given a poppier direction (they have a direction, you know; they have lifeplans). Governments and economies have changed hands since then, so it’s now time for LP#4, We Love Machine, which really needs a comma one-third in to show the I, Claudius labouring that’s gone into it. You see, Warren and Wisternoff really do love machines, so much so that they’ve tapped into a perpetual motion to which you can either a) dance your fucking nuts off or b) slip quietly into dreamland. Very few dance albums can boast this kind of duality; maybe twenty at an absolute pinch. The rest are all a bit too puppyish, jerking at the lead and enraging your neighbours.

Clearly touched by the rise of the Junior Boys, LCD Soundsystem, and other “who cares if we’re geeky, we can slink” affairs, WoW have knitted together obscenely competently seventy minutes of flawless, relentless pacing and glimmer, a pair that gets under the skin like ringworm. Of course, We Love Machine can also be read as We Eschew Software, as this record was built entirely on synths that usually only go to collectors. But don’t let that old shtick deter you—these two eggheads in their hall full of obsolete silicon can still marshal endorphins like a step-parent, piecing together a dozen old shapes into one seriously nimble modern groover. The opener, the title track, has easily the most optimistic bass hook I’ve heard this year; its avian darting and flashes of Berlin zap you straight back to some nineties house heyday. But look! Those embarrassingly compressed over-modulations you remember, the whiteboy scratching and illegal t-shirts? Gone, tidied up, all of it. The Way Out West sound has been buffed to the core like the truck lab in old-school episodes of Knight Rider, arcane technology cleverly preventing anything too serious from happening. At one point—the rowdy throwdown of “BodyMotion”—the Ws even take things right back to the warehouse, complete with gangsta leanings and vaguely horrific chanting. Pity poor Jonathan Mendelsohn, the durable sessions vocalist they’ve made run a marathon across the record. Here his cool Brooklyn lilt gets mauled by the bass as it emulates a Nottingham all-nighter.

Elsewhere, though, the new boy gets to flourish, most notably on lead single “Only Love” where he gets to take his range to the stratosphere. Here, “we love machine” becomes literal—although it’s no much love as abduction, kidnapping the drum line from “Pump Up The Volume” and mothering it with rich disco. Fortunately, Stockholm Syndrome is instantaneous, so Mendelsohn’s falsetto and that beat coalesce into big hit potential. If this was on Domino or had twentysomethings lashed onto it, it’d be year-end lists all the way. Decade lists, actually, if it had come out of nowhere; there’s a real timeless gleam to the album, and the absence of slumps/sticky patches/filler can resonate with bloggers and joggers, alike, now being a great time to compile lists and get suckered by kitsch. Wisternoff and Warren may be pushing middle age, but their handiwork’s grown neater than ever, weapons wielded Clint-Eastwood-sturdily. Heck, these aren’t beats—they’re arm-locks, and once they get a hold of you, you’re Nelsoned. I defy anyone not to crumple to “Tierra Del Fuego”‘s new-age almost-Swedishness, or the grow-a-rocket-in-your-pants disco of “Survival,” as sparkly as it is erogenous.